The Safra'Numériques are celebrating their 5th anniversary this year: 5 years of artistic surprises and an ever-growing audience (13,000 festival-goers in 2019) of rare diversity, to explore the ever-changing forms of digital art. For five days, the artists will be taking over the 4,500 m2 of Le Safran, its forecourt, the northern district, but also a town near Amiens. Every year, the festival is weaving the area more and more tightly together and forging partnerships with other structures in the city to reduce the digital divide, bring in distant audiences, promote inclusion, etc.

With 54 proposals aimed at children, teenagers and adults, the programme invites the public to go beyond the boundaries of art to physically explore the relationship between the virtual and reality, decipher today's world but above all to experiment with "augmented" perspectives for tomorrow's world through the workshops on offer (multisenstional VR, print pen, 3D printing, etc.).
The artists, sometimes very young, explore with the public, an era that increases the capacities of the living, where man is one with the machine, where environmental awareness is sharpening. Through their works and the workshops they offer, they invite us to go beyond the screens to engage with the public. In Real Life in the ongoing mutations.

This fifth edition will take place from 17th to 21st March at Safran, a 4,500 m² convention stage in Amiens. Noteworthy is the extension into the public area with the installations by TILT and the projections by Kolektif Alambik, as well as the arrival of Hiroaki Umeda, star choreographer and multidisciplinary artist, a leading figure on the Japanese avant-garde art scene.

Programming 2020: all senses on alert! 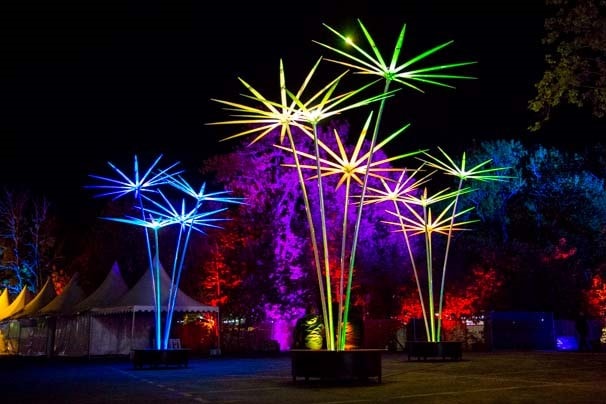 Let yourself be immersed in the hypnotic performances of the Japanese choreographer. Hiroaki Umeda : Accumulated Layoutin which the artist composes with light and sculpts space. ; Intensional Particlea moving picture that makes visible the flows of kinetic force in the human body. The choreographer finds himself alternately weightless in undulating landscapes, surrounded by metallic flames or pierced by lines of light.

Admire the vibration of the Papyrus and the play of shadows of their leaves, created by the light designers. TILT.

Let yourself be surprised by the images distilled on a building by the Kolektif Alembik.

Play SnakePit, the vintage game of the old Nokia, in a life-size version, revisited by Volker Morawe and Tilman Reiff. Then set off on a frenzied race where all your abilities and senses will be called upon.

Stuck in bed after an accident, the illustrator from Nantes Elly Oldman has created an interactive visual investigation. On the walls of the Safran, The Great History of Endless DrawingWith subtlety and humor, it invites you to act for the environment.

In Machine 2 Fish of the Collective DARDEXThe installation combines a machine with an aquarium fish to allow it to live and move in the unusual terrestrial universe!

With the Dutch artist Joris Strijbosdiscover three robots that interact with their environment, in the installation Axon. The artist refers to Jeff Hawkins' research on neural networks, the structure of which could allow the creation of autonomous and creative machines. With Revolve, he researches the limits of human visual perception and the influence of machines on it. Dreams, nightmares or innovations already in progress?

In Tuxedo Bench, Jeppe Hein installs the visitor on a bench gradually shrouded in fog, an evocation of Smog?

When this one disappears, the person is reborn. Through his poetic creations, the Swiss artist Camille Scherrer, makes us discover Mountain World through a subtly augmented book. With Super FirLight and sound patterns fall from the ceiling, for the visual and auditory pleasure of adults and children.

Visual artist, scenographer, artistic director of the Mobilis-Immobilis Company, Maflohé Passedouet is one of the most inventive artists of her generation and will present four installations: Selene, Herbarium, Echoes and Between the lines, disturbing and sensory works that question the essence of the human being through his link to the ecosystem, overturned by the irruption of new technologies.

Tribality or urbanity, these two realities are opposed? Not so sure when you get caught up in the mythical ballet... Afternoon of a faun remixed by the company Sine Qua Non Art with MetamorPhoneA dose of electro dance, beat box and graphic design!

Go into a trance and roll young!

Ikbal Ben Khalfallah has been in charge of the Safran convention scene since 2014, where he is developing a demanding program that is in line with current world events and complements that of the city's other cultural structures. Although he has long followed in his father's footsteps, who came to Troyes from Tunisia at the end of the 1960s to play football, Ikbal Ben Khalfallah first came into contact with theater through a French teacher. This fundamental encounter was to accompany him for years, until his first steps in culture, as Head of the performing arts in Saint-Quentin and then as Director of the theatre in Charleville-Mézières.

Didier Gus Ringalle has been production director and co-programmer with Ikbal Ben Khalfallah the Safra'Numériques for 5 years. For the Safra'Numériques, with Ikbal, he has worked on events and venues such as Laval Virtual, the Bains Numériques in Enghien-les-Bains, the Studio national des arts contemporains Le Fresnoy, Visions in Brussels and the international digital arts scene.
Beyond production and programming, Didier Gus Ringalle also accompanies these artists at the crossroads of disciplines and administrative frameworks.

A changing territory, at the forefront of new forms of social and artistic hybridization

The Safra'Numériques are part of a metropolis, Amiens, which is undergoing rapid change with the reopening of the Picardy Museum and the Zoological Park, the Citadelle university centre designed by Renzo Piano, the completion of the renovation of the station district led by Paul Chemetov, the Comic Strip Rendez-Vous, the Waide Somme image centre and the fablab La Machinerie. Several partner cultural venues - the Maison du Théâtre, Mélodie en sous-sol, the Hélène Bernheim library, the Ecole Supérieure d'Art et de Design d'Amiens, the Maison de la Culture d'Amiens, Canopé, the Synapse association, the ASC training centre or the Odyssée - will host shows, workshops and exhibitions.

Safra'Numériques is also located in a region of the Hauts de-France at the forefront of these new forms of social and artistic hybridization. They are forging partnerships with Le Fresnoy in Tourcoing and also outside the region with Saint-Ex - Culture numérique in Reims, the Festival Maintenant in Rennes and many others.

Le Safran, a conventional stage in the heart of a world district

Le Safran is located in Amiens Métropole, an urban area of 180,000 inhabitants, more precisely in the heart of the North district, a district of 32,500 inhabitants, where a hundred or so nationalities live side by side, a district bubbling with energy, rich in the diversity and diversity of its inhabitants, 30 of whom are under 30 years old. This cultural complex and art centre of 4500 m2 has an auditorium that can accommodate 214 spectators, an exhibition hall called the Carré Noir, as well as numerous rooms and workshops used for artistic practices (drawing, painting, ceramics, dance) and for artists' residences.

The annual programme creates bridges between the performing arts and the plastic arts, with a strong desire to open up to the international scene while developing specific support for the district and the city.

One out of every two companies is foreign and in five years, all the continents eSome 30 countries were represented.

Finally, Safran is a place of support and accompaniment for local, national and international artists in the field of creation, distribution and co-production, in connection with the various actors of the territory. Its objectives: to work with new perspectives and move the lines to open up horizons, create links and reduce inequalities in access to art, digital and culture.

The Strange Tales of Niels Hansen Jacobsen. A Dane in Paris.

From the bipedal robot to the artificial heart, to the Minitel... The epic of prototypes at Arts et Métiers