Since 26 February 2020, the Palais de la Porte Dorée has been presenting an exhibition devoted to the work and imagination of Christian Louboutin, a shoe designer and leading figure in the world of fashion. Conceived as an invitation to plunge into the teeming universe of this outstanding designer, the exhibition explores all the facets of his inspiration with multiple references, in a place that is dear to the designer and which saw the birth of his vocation.

From the very beginning, Christian Louboutin infuses his creations with a great wealth of patterns and colours inspired by his love of the arts and other cultures. Flamboyant, audacious, open to the world, generous and sometimes sultry, the designer's universe is nourished by a passion for travel, references to the world of pop culture, show business, dance, literature and cinema.

Unveiling Christian Louboutin's inspirations and creative process, the exhibition will showcase the creator's vision through some of his most precious works from his personal collection as well as loans from public collections.
A wide selection of shoes are on display, some of which have never been exhibited before. These heritage and artistic pieces are exhibited alongside numerous exclusive collaborations that underline Christian Louboutin's attachment to know-how and craftsmanship, such as stained-glass windows made by the Maison du Vitrail, a Sevillian silver palanquin or a cabaret carved in Bhutan.

Born in Paris in the 12th arrondissement, Christian Louboutin was fascinated from adolescence by the architectural beauty and ornamental richness of the Palais de la Porte Dorée, which nurtured his love of art and applied arts from an early age. He drew from it a repertoire of shapes and motifs for his early creations, including the shoe Mackerel made in metallic leather and directly inspired by the iridescence of the fishes in the Tropical Aquarium. It was here, in this Art Deco masterpiece, that the young Christian Louboutin was seized by a sign forbidding the wearing of stiletto heels, which later inspired the iconic shoe Pigalle and will be reinvented over the seasons.

With this exhibition, Christian Louboutin initiates a new programming of the Palais de la Porte Dorée dedicated to today's creation.

Exhibition [niste] is a title that came to me quite quickly. It's a play on words between exhibition in English meaning exhibition and revealing a part of oneself to others. To exhibit is to expose oneself. An exhibition is exposing yourself. So the two are quite close, but there is a more subversive notion of exhibiting that I like because by showing my work I expose myself in a more intimate way. I have invested a lot in this project, both professionally and personally. I reveal a lot about myself, my inspirations, my creative process and I wanted this to be understood from the title of the exhibition.
Christian Louboutin

By Olivier Gabet, Curator of the exhibition, Director of the Museum of Decorative Arts

Today, fashion is established as a major artistic field that has full rights of citizenship in all major cultural institutions, such as the Palais de la Porte Dorée, Museum of Immigration History, as shown in the exhibition Fashion Mix in 2014. The field of creation that it embraces and the historical, political, social and anthropological issues that it raises draw an open, popular, inclusive, universal territory as well, which often profoundly redefines the very principle of access to the museum.
For many parts of the population it is often the reason for an increasing number of first-time visitors to enter a cultural institution. Present in many places in the public space, in the media and social networks, fashion is one of the subjects that intrigue and fascinate.

It is in this spirit that the first major exhibition dedicated to Christian Louboutin's creations was conceived, in Paris, at the Palais de la Porte Dorée in 2020, covering nearly thirty years of prolific, erudite and joyful activity. More than any other place in Paris, the Palais de la Porte Dorée is more important to Christian Louboutin, the district where he grew up and the museum he visited as a young man when this absolute masterpiece of Art Deco was home to the national collections of African and Oceanic arts.
When he was very young, it was the beauty of this architecture, the refinement of its decoration, but also the poetic and human magic of the works admired, opening the imagination to the geography of the world and to all civilizations, that marked Christian Louboutin.

It is also the place of an original initiation, this sign forbidding to walk with heels on the precious floors of the museum, the first shoe seen, revisited, and forever the first step in the universe of creation.

Every exhibition is a challenge: how to give an idea of the passing of time without freezing it, how to show the effervescence of the creator without sanitizing it, how to show what has constituted the network of inspirations and friendships so crucial?
Christian Louboutin has generously chosen to adopt this bias, in his own image, a fantasy and freedom supported by a solid knowledge of the world, art and fashion, a journey in which inventiveness, emotion and know-how, a taste for entertainment and a sense of humour are never dissociated. Christian Louboutin's unique place in the world of contemporary fashion is also due to the fact that his work is rooted in popular culture, in the noble sense of the word.

By metonymy, in film, music, music, the Louboutins are now the shoes par excellence, close to all sexes, genders and origins, through the series of the Nudes.

The Palace of the Golden Gate

The Golden Gate Palace is a place very dear to me. I grew up in the 12th arrondissement, not far from here. I went to the Elisa Lemonnier and Paul Valery high schools just behind the Palais. I spent hours in the cinemas on Avenue Daumesnil, which at the time showed Indian and Egyptian films. Regularly on weekends I would dream about the Tropical Aquarium, bewitched by the colours and brilliance of tropical fish, and the Museum of African and Oceanic Arts.

I have always been fascinated by the architectural beauty and ornamental richness of the Golden Gate Palace, which has played a founding role in my life. It was here that I first discovered the diversity of decorative and applied arts. I was fascinated by the delicacy and monumentality of Alfred Auguste Janniot's bas-reliefs, the grandiose frescoes by Ducos de la Haille and the furniture by Ruhlmann and Printz. It was also here that I first saw a drawing of a shoe.
I became impregnated with all these motifs - abstract or figurative - which came to constitute an unconscious repertoire of shapes, colours, textures that never ceased to influence my imagination. Nourished by a passion for travel - real or dreamed - my universe is composed of a juxtaposition of references borrowed from the arts and cultures of the world, from the stage, literature or cinema.

The Palais's invitation to design an exhibition in this place that showcases all these inspirations immediately made sense to me. Olivier Gabet imagined this moment which he says is "an immersion that presents the multiple facets of a protean expression". There are unavoidable moments because it is also a part of my life, but it is above all a constantly evolving process made of comings and goings, discoveries, rediscoveries and - above all - encounters.

This immersion brings to life the precious encounters that have marked my journey through the work of craftsmen with unique know-how and collaborations with artists who are dear to me.

The exhibition closes with a space that constitutes both my "Imaginary Museum" and a place of all possibilities, anchored in the present and turned towards the future. One finds there more or less obvious inspirations but also, more simply, works that I hold dear and that have sometimes accompanied me for several decades. For me, this exhibition is an opportunity to pay tribute to this Palace which saw the birth of my vocation and which has never ceased to inspire me ever since. 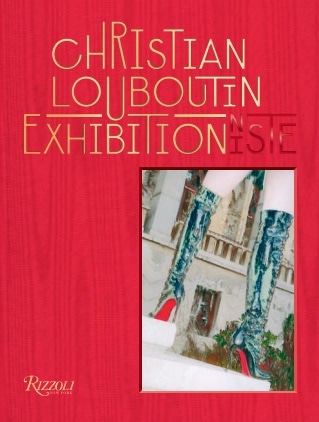 Éric Reinhardt paints an intimate portrait of the designer, a plunge into the countless sources of inspiration for his emblematic shoes. In this book, which accompanies an unprecedented exhibition at the Palais de la Porte-Dorée, Christian Louboutin reveals his sources of inspiration, his imagination, his culture and his aesthetic taste for art and precious or unusual objects, as well as for certain personalities from the world of art, fashion and show business, from Oscar Niemeyer to Yves Saint Laurent and Tina Turner.

Original drawings by Christian Louboutin accompany these objects and works of art, attesting to their influence on his work. All these pieces come from the most prestigious international museums, private collections or Christian Louboutin's homes.

Olivier Gabet, the curator of the exhibition, brought them together through exchanges with the latter. Jean-Vincent Simonet's incandescent photographs, specially made for this book, reflect the sensual and electric charge of Christian Louboutin's creations.

In a playful and erudite conversation with the writer Éric Reinhardt, who also signs the editorial and artistic direction of this book, the reader goes through the creator's cabinet of curiosity, penetrates his intimacy and discovers the talent and the constantly astonishing thought of the man who has been standing behind the famous red soles for more than twenty years.

Green Currents - Creating for the Environment