Faced with the coronavirus and the containment it causes, Gallimard publishes one or two " Crisis leaflets "signed by the great feathers of the House such as Erik Orsenna, Sylvain Tesson, Cynthia Fleury, Régis Debray, or Danièle Sallenave, in order to reflect on the questions raised by the epidemic and to keep the link with the reader. 25 titles have been published to date. UP' has chosen to offer you each day an extract from a selected text and author. 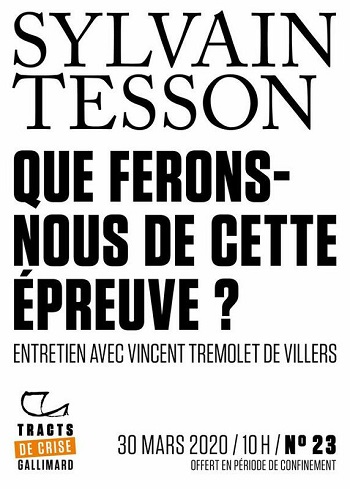 What you call, in Les Chemins noirs, the device (entertainment, performance, commerce, consumption) has died out like in a Barjavel novel. What does this moment inspire you?

Ultra-globalization cyber-mercantile will be considered by future historians as an ephemeral episode. Let's summarize. The Berlin Wall comes down. The reign of global materialism begins. History is over, says one thinker. Trade is great, every political leader will be his prophet, the globe his souk.
Humanity is connecting. Eight billion human beings are receiving the same signal. Moldovalek and Berrichon may desire and acquire the same thing. Digital technology completes the uniformity.
The Earth, an old stained glass window, is given a new name now that the lead ribbons have melted between the facets: "the planet".
It merges, becomes a company, a place where systemic flows are articulated. Politics becomes management and management manages the movement to speak the infra-language of the time..

A new dogma is being established: everything must fluctuate, mingle without respite, without hindrance, therefore without borders. God is movement.

Circulation is good. Staying is bad. Nothing can be claimed from anywhere anymore, because everything can be from everywhere. Who will intellectually oppose the religion of flow is a dog. The wall becomes the form of evil. Haro on the wall! In the corporate world it disappears (reign of the openspace). In man it fades away (reign of transparency).

In nature it is frowned upon (the alchemical reign of gender transmutation). The decompartmentalized masses are shaken. A barrel of oil costs the price of four packets of cigarettes. The permanent circulation of the human race is at times a farce: global tourism (I include myself in the army of the pits). And sometimes a tragedy (the movement of refugees).

An OPA in the order of charity is realized: if you do not consider the displaced as the absolute embodiment of human distress you are a bastard.

And then suddenly, a grain of sand in the gears. That grain is called a virus. It's not very powerful, but when the doors are open, it circulates, drawing its strength from the air stream. The danger of spreading it out outweighs its harmfulness. In a forgotten bush, we wouldn't talk about it. In a Europe of the four winds, it's a socio-political cataclysm.
Like the tourist, the container, the information, the globish or the ideas, it spreads. It's like the tweet: toxic and fast. Globalization must have been happy.
She's a camellia lady: infected.

The Unity of Life, by Erik Orsenna