Faced with the coronavirus and the containment it causes, Gallimard publishes one or two " Crisis leaflets "signed by the great feathers of the House such as Erik Orsenna, Sylvain Tesson, Cynthia Fleury, Régis Debray or Danièle Sallenave, in order to reflect on the questions raised by the epidemic and to keep the link with the reader. 30 titles have been published to date. UP' has chosen to offer you each day an extract from a selected text and author. 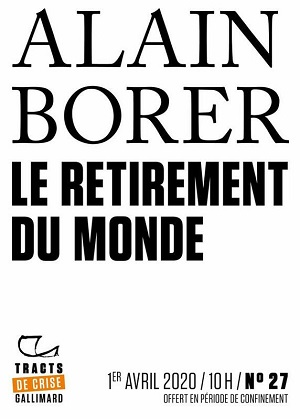 Even if we count the dead, even if we would soon be among them, the pandemic would be distinguished by having been first a language word, a new word, unknown the day before, pronounced for the first time by the whole of humanity and simultaneously, a word with a Latin consonance (but with an American morphology) five syllables long, like a black caterpillar suddenly proliferating in billions of occurrences, and whose name is not mentioned here for a few moments;  a single word, a sure sign of the unheard of event, proceeding to the unification of this world (this is the very meaning of epidemic: "everyone")!

This led to other local idioms, such as barrier gestures, hydro-alcoholic, confinement - and of course the spread of anglobal, a cluster instead of an outbreak, of which one minister promoter and bearer, transmitted by all television stations, while the President calls for care a scientific committee: let's speak the language of the master for the serious things, and the French evening at home.

The Pope walks alone through the ghostly streets of Rome, ghostly deserted, as if he were the last survivor of a decimated humanity. No area escapes general deregulation, public health, economy, politics, society, the intimate life of every human being: so the epidemic does not let itself be grasped in an object - because there is no exteriority from which to speak of it; like language and the Real, we are inside.

We have entered a smectic period: that concerns soap. Even those great witnesses of a great era already far away, Bardot, Belmondo, Delon, Godard, still with us, what are they doing at this hour? Washing their hands, probably. In Melbourne Rod and Nicole wash their hands; on the West Coast Mark sings I will survive! on his way back to his snowy Colorado home.

Three billion confined. Is this still "globalization"? No, it is no longer just a question of the human race.

One could set the confined against the heroes, the hidden and the health personnel; one goes to the front for the others, the confined keep all others at a distance, as they did with the migrants; and so many dead that one washes one's hands of them. The confined succeed "those unemployable bureaucrats" who fled Paris for Versailles following Adolphe Thiers on March 18, 1871 and who, "enjoying an extraordinary leave of absence, waited for the rest of the events, concerned only to know whether they would pay for these two months of irregular holidays"; but the event has the power to be said in a single painting by Albertus Pictor (1457), Death Playing Chess: for the first time in history, the whole of mankind reacts at the same time as one human to the approach of death.

In April, The Cube invites itself into your home

A necessary text, by Alexandre Postel