According to its own definition the online platform MyOwnDocumenta is "a virtual object unidentified by the artists themselves", who pose, during their infinite residencies, the traces of their ongoing projects. A collective logbook where each artist or author regularly posts, at his or her own pace, publications on their work in progress, fragments of old projects, unfinished concepts, the process being privileged to the final result. A new idea born in this period of constrained confinement ...

The project was initiated on April 3rd by the artist David Guezwhich carries out artistic projects related to new media, mainly focusing on the themes of memory and time. It also works on the realization of numerous collaborative platforms that question the uses and limits of new technologies while proposing new alternatives. His projects are produced and presented in numerous artistic venues such as the Centre Pompidou, the Jeu de paume, the Gaité lyrique, Le plateau, the Centre Barbara, Banff, the File Festival Brazil, ISEA 2015/2016, etc., and enjoy international recognition.

For David Guez, who regrets the standardization of artistic relays such as street art galleries or online art galleries, press articles according to the news or opportunities for meetings, ". there was a lack of a place for artists to present their work in progress or their ideas, a bit like a diary. "As for social networks, which are certainly practical to mark its presence, they do not offer archiving, the mix of genres is not always rewarding, ...

Autonomous spaces for a common flow of creations and publications

In 15 days, the platform MyOwnDocumenta was created, first between friends, then, faced with the enthusiasm of the artists who were discovering it, David made a selection with moderation by co-optation, each artist managing his own space, at his own pace, in complete autonomy. They are today more than sixty artists and authors !

Everyone integrated the project with a natural spontaneity that highlighted a "lack" in the enhancement of the creative process. Here, no "selection", no "fashion effect", no mediation: "In journals, in editorial offices, there's always a selection, a mediator, explains David Guez. There, I wanted everything to be done by the artists themselves, directly. As soon as the online account is opened, the network evolves by cooptation. There's no selection, but artists co-opting each other and revealing other artists they like. »

The webcam in the workshop

Purpose? No sale! The goal is to show the creation in the making. The reference is made to Leonardo da Vinci's Notebooks. (1) which contain notes, sketches, drafts, calculations, reflections, ...

Like them, the platform wishes to showcase the effervescence of contemporary artistic creation, while revealing the multitude of concerns and questions of artists of our time. History and individual and collective memories, the present time, are revealed through remembrance and testimony. They are suspended in oblivion and silences, in distances and departures, and are thus articulated, collectively grouped together, but totally independent intellectually, in a virtual place, open to the greatest number. 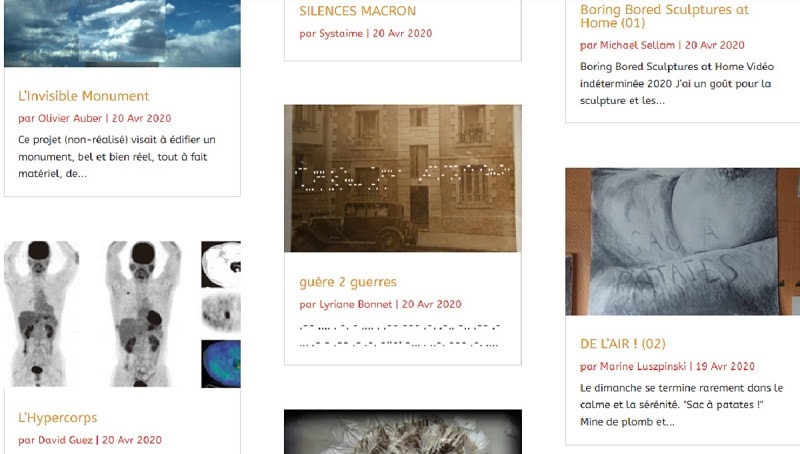 The documents and works put online allow to understand the approach and the works of the artists. We are therefore far from the traditional galleries. The artistic work process mixes poets, writers, painters, digital artists, sculptors, but also "operators", such as curators, art critics, editors, who want to co-opt artists they know personally.
An important artistic communion chosen and not selected.

A jostled communion, however, in this tragic period of health crisis where artists are on the front line, when the pills are cancelled, when delays in the payment process - for those who are still lucky - accumulate in the exhibition galleries or art centres.

"Through hospitality, the impossible happens" said Jacques Derrida. MyOwnDocumenta is then like a big house of refuge from the turbulence of our societies.

A festival of uncertainties, by Edgar Morin

The interview that we are, by Pierre Assouline, of the Académie Goncourt