Faced with the coronavirus and the containment it causes, Gallimard publishes one or two " Crisis leaflets "signed by the great feathers of the House such as Erik Orsenna, Sylvain Tesson, Cynthia Fleury, Régis Debray or Danièle Sallenave, in order to reflect on the questions raised by the epidemic and to keep the link with the reader. 62 titles have been released to date. UP' has chosen to offer you each week an extract of one (or two) selected texts and authors. 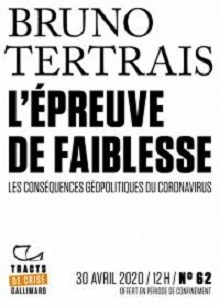 This must have been the world of Blade Runner (1982), which is scheduled to take place in 2019, or that of Green Sun (1973), which takes place in 2022. It is finally the world of Contagion (2011) that we are living. What will be the geopolitical consequences? Major crises are trend accelerators and this one will be no exception. Like Stefan Zweig in his time, we will no doubt regret Yesterday's WorldThe return of borders, already well under way in the course of 2010, is now well and truly here. The fear of the virus will be added to the fear of foreigners: less tourism, less immigration.

But just as the Black Death led to the end of trade by sea, the Covid-19 crisis will not put an end to globalisation. Including because an interconnected society has advantages for the management of epidemics: warning and surveillance; repatriation; international assistance; scientific cooperation... This will not be the end of globalisation but of its "happy" version. The slowdown in globalization was already underway: for the past ten years, trade and investment abroad had been growing less rapidly than production. (1). At issue: the financial crisis, disasters revealing the vulnerability of economies (Japan, 2011), the rise of nationalism and protectionism, technological change (automation) and environmental concerns.

In the short term, companies will want to rebuild their margins and will continue to source from Asia. But in the medium term, we will see value chains shortening and the just-in-time production will decline. In both Washington and Beijing, advocates of "decoupling" the economies of the two countries are strengthened in their positions. Of the three possible futures for the world of 2030 proposed by the American intelligence community in 2017, that of the 'Archipelagos' (fragmented world) seems more likely than those of the 'Orbits' (competition of powers) or the 'Communities' (hyper-connected world). The "Archipelagoes" scenario was, moreover, the result, among other factors, of the "great pandemic of 2023".

Will this economic paradigm shift be accompanied by an environmental shift? Faced with what is presented as an "ultimatum from nature" (Nicolas Hulot), many activists hope that the fight against climate change can be taken seriously after the current pandemic, as governments have shown an unprecedented capacity to mobilize to fight it.

This will not be the case: if SARS-CoV-2 is so mobilizing, it is because its effects are immediate, visible and tragic for both individuals and states. In spite of the announcements made by European leaders, it is even possible that environmental concerns may for a time become relatively secondary to the imperative of relaunching productive aircraft. All the more so in a period of very low oil prices (less than 20 dollars as of 27 April).

There will, of course, be warnings about the possible links between the two. Indeed, there is a recurring fear of the possible epidemiological consequences of melting permafrost, particularly in the northern part of Russia. But this fear does not seem to merit excessive concern: there are few serious studies showing that a serious health hazard would result from this melting. On the other hand, ecology, in the primary sense of the term, could return to the forefront, in particular the fight against deforestation and the destruction of natural habitats, which are known to be partly responsible for the emergence of previously unknown viruses.

What does it take to re-enchant the path?