Faced with the coronavirus and the containment it causes, Gallimard publishes one or two " Crisis leaflets "signed by the great feathers of the House such as Erik Orsenna, Sylvain Tesson, Cynthia Fleury, Régis Debray or Danièle Sallenave, in order to reflect on the questions raised by the epidemic and to keep the link with the reader. 66 titles have been released to date. UP' has chosen to offer you each week an extract of one (or two) selected texts and authors. 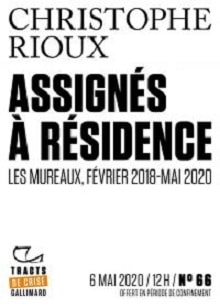 Under house arrest. It wasn't me who said it, it was our president. It was February 20, 2018, in Les Mureaux, the sensitive urban area where I grew up. At the time, the President had strong words: he spoke of "cultural emancipation" and denounced the "unbearable house arrest" from which our suburbs suffered. In retrospect, the words were prophetic, even though this "house arrest" applied to an entire territory and not to a single roof, as it does today. Two years later, we are all under house arrest. Or, to use a fashionable synonym, confined. For the past few months, the Nation has been experimenting on a large scale with daily life in the suburbs, and it is already fed up with this narrowing of existence. In normal times, what does it mean to be under house arrest in a sensitive urban area? It is, quite simply, the near-impossibility of getting out of it, and, more broadly, of getting out of it. Unless, perhaps, we dream of a "New Deal" for Culture, which would not forget the suburbs.

Because I am not talking here about the gentrified suburbs of the inner suburbs of Paris, I am thinking of those that are in a kind of no-man's-land in the French space, around Paris and most of the large French metropolises. For those confined to a radius of one kilometre around the home we have all become, the image of the isochrone is now telling: take a circle of forty or fifty kilometres around Paris and you will get a fair idea of these landlocked cities served by suburban trains that are sometimes hazardous and always crowded, except perhaps in epidemic phase. For a long time, they have been the forgotten ones in terms of regional planning and the RER, horizontal tricolour arrows pointing towards the Capital, do not stop there. More vertical in theory, the social lift, which promised other long-distance journeys to other parts of the world, has desperately broken down.

At the beginning of containment, the suburbs were placed under surveillance and somehow these territories once described as "lost to the Republic" were challenged to comply. Some even demanded the intervention of the army to enforce the political decision. There have been some excesses here and there. But, on the whole, the underprivileged neighbourhoods have been in tune with the country, despite the cramped housing and the promiscuity of families. Their inhabitants are among those who, at the moment, are taking all the risks and sometimes paying a heavy price, continuing from dawn to go to the Belly of Paris to work. They spin the great wheel of the economy, without ever really having seen the colour of the Marshall Plans for the suburbs and their promises of a better future. Those under year-round house arrest have no second home to flee Paris and the epidemic, in a bucolic exodus. They are not familiar with the tradition of those troubled times, when the wealthy classes would retreat to the countryside and eventually return, having sent out the prosaically called "testers", who were paid to ensure that the plague had definitively abandoned the cities. In the light of these not very glorious historical episodes, the suburbs have shown unfailing mutual aid and solidarity: in Les Mureaux, young people from the cities come to deliver food supplies to the elderly or sick, delivered right to their doorsteps. Elsewhere, although one may doubt the validity of the measure from a strictly scientific point of view, they energetically disinfect the building halls and stairwells of the HLMs, for the good and health of all. Nevertheless, we must be careful not to be overly optimistic in these places: traffic is adapting, fundamentalism is on the lookout, and exasperation is brewing.