Growth (implied GDP) is the barometer of our societies. But this indicator is challenged by a growing number of people who are becoming aware of the ecological crisis and risk. Many of them evoke, without going further in the analysis, that "infinite growth in a finite world is impossible". That growth is a dogma and that all that is needed to change mentalities and behaviours is to change the software. In this article, we will try to distinguish the wheat from the chaff by adopting a non-dogmatic approach, and to do so, try to be as factual as possible.

"To believe that you can have infinite growth in a finite world, you either have to be crazy or an economist."
K. Boulding

By the way, why is infinite growth impossible?

Let's get off the base. The growth that is the subject of debate is economic growth. It is expressed through an economic indicator, the gross national product (GDP), whose definition and calculation methods are established by the United Nations. GDP measures changes in wealth, the value of all goods and services produced in a country in a year (net of price increases). If GDP increases, it means that the production of goods and services produced vs. N-1 increases. In this case, the economy is said to be growing. So far, so good.

But to produce goods and services, you need energy... that's where it gets complicated: growth means increasing energy consumption. It's a physical law As soon as the world around us changes, as soon as something goes from state A to state B, energy comes into play. This is why "the efficiency of an economy can be measured by its capacity to efficiently transform energy into goods and services" since the basis of economic activity is energy input: energy and economic activity form a coupled system [1].

This coupling between growth and energy poses two long-term problems (not to say short-term) :
– Energy resources (and raw materials indispensable for growth) are not infinite, especially since the energy return rate reflects the impossibility of exploiting all the energy sources available on the planet.
- Our growth is dependent on fossil fuels in general and on oil (and its derivatives) in particular [2]. Energy whose extractivism and combustion have retroactive effects on the biosphere (climate, biodiversity, pollution, etc.). These are all negative externalities that economic "science" does not always incorporate into its models. And when it does, the surprising conclusions.

In any case, the laws of physics are stubborn. So we stop growing? No, because despite this observation, whether we like it or not, the worm is in the fruit: we are prisoners of the growth imperative...Let's see why.

Why are we doomed to growth?

"God laughs at men who cherish the causes and deplore the effects. »
Bossuet

"You don't solve a problem with the ways of thinking that created it. »
Einstein

While these initiatives are a step in the right direction, I have never heard a whistle-blower talk about the root of the ecological problem: the way money is created condemns us to growth [3]. 3] If we accept to be radical in the etymological sense of the term (taking a problem to its root), let us examine how the imperative of growth and money creation are linked and impact our lifestyles. 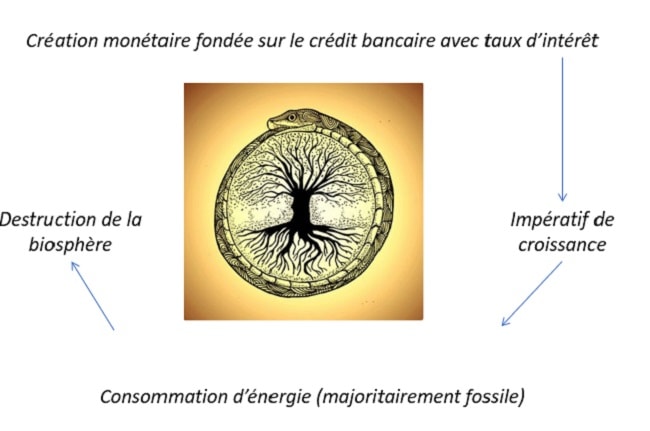 Impossible to escape growth as long as monetary creation is based on bank credit with interest rates: an interest rate means imperative growth and imperative growth means increasing energy consumption (in a finite world). Growing energy consumption (mostly fossil fuels) means destroying the biosphere. Conclusion: changing money and the mechanism of money creation is the condition for the creation of a new economy. sine qua non to change the system that condemns us to growth. #CQFD

Conclusion: Mixing alternatives by acting at all levels

1) Changing our individual and corporate behaviours to reduce our impact. We need to celebrate our successes to move forward and win new battles. This is why we must welcome the growing awareness of the ecological emergency.
Small creeks make big rivers. This is why we must continue to do our part, to act individually (and collectively) at the local level to generate greater autonomy, resilience and help reduce the impact of our activities on the living things on which our lives depend.

But it must be said: doing your part is a necessary but insufficient condition to change software. Without the help of companies and states, there can be no New Deal.

In this triangular relationship between the isolated citizen-consumer-employee, businesses and the State, it seems to me that the only card to play to have a more global impact is to collectively encourage businesses to change their behaviour [4]. 4] And if the States do not do so, it is up to us to ensure that companies change, through our economic ballots which are our acts of purchase and application.

Embarking companies towards a way of producing that is more respectful of the living. In other words: changing demand to change supply, rewarding pioneering companies through our purchasing acts and applications (according to each person's possibilities). This approach is also a means of encouraging States to overcome their inertia, because it is likely that States will change only under the impetus of companies... which themselves will change their supply only when the demands of their customers encourage them to change their way of producing.

The work done on ourselves to take into account our impact on the living is essential. And beyond this work, a new narrative embodied by a generation is essential to make mayonnaise rise.

But in the end, for mayonnaise to take hold, a desirable alternative must be found that frees citizens, businesses and... States from the imperative of growth. The inertia of States in meeting the commitments made at COP21 stems in part from the growth imperative to which they are subject, just like households and businesses.

2) Change the current monetary creation to preserve life (avoid an economy that condemns us to imperative growth and therefore to the destruction of the biosphere). Two alternatives exist for an economy freed from the imperative of growth:
– Full change which must be endorsed by a sovereign power (a state) in order to be implemented. This has never been the case. By voting "no" in the June 2018 referendum, the Swiss missed the opportunity to be the pioneers of an economy free of the growth imperative.
– Free currency has been operational since 8 March 2017, because its implementation requires neither state nor bank intervention. It is the first fair currency in history, as it gives citizens back the power to create money. To acquire free money, all you need to do is open a free account at Cesium ...and to create them, you have to find the closest free money aperitif to home. Beyond the fact that it frees its users from the imperative of growth, this currency is energy-efficient in terms of its social utility. Its take-off depends only on you.

These two monetary alternatives are fully complementary and biocompatible.

Beyond monetary issues, the above-mentioned alternatives, on both small and large scales, are the condition for sine qua non so that the majority of the living can hope for a desirable and sustainable future. In spite of everything, physical laws being what they are, energy sobriety remains the rule: the best waste is the one we don't produce. In this respect, the development of biomimetic innovations and assistance in the implementation of a usability economics could complete the picture of the above-mentioned alternatives.

If you could only remember one thing from what you've just read...

"There is nothing more difficult to accomplish, nothing more dubious in its success, and nothing more dangerous to carry out, than to initiate a new order of things. For the reformer has enemies among all those who benefit from the old order, and only lukewarm defenders among all those who could benefit from the new order, this lukewarmness emerging partly from the fear of their adversaries, who have the laws in their favor; and partly from the disbelief of humanity, which does not really believe in anything new until it has really experienced it [5]. »
Machiavelli

1] Thank you @thierry caminel for this article which hasn't aged a day! and our exchanges on the subject
[2] Coal also has beautiful remains...don't believe that it is a 19th century energy: https://www.youtube.com/watch?v=kk0TIhy2D3g  and from a more Eurocentric point of view: https://www.linkedin.com/posts/jean-marc-jancovici_quel-pays-ou-zone-est-le-premier-importateur-activity-6566985614271623168-zoe1
3] An overview of the current money creation mechanism: in summary, Bernard Maris, former Governor of the Banque de France https://www.youtube.com/watch?v=B6H2v4DaEyo and Data Gueule speak about it best: https://www.youtube.com/watch?v=dSdtuW5ko2I . To go further: a complete description of the current money creation mechanism with the proposal of an alternative to measure the consequences of the "choice of money" on the organization of a society and its sustainability : http://www.centpourcentmonnaie.fr/
4] For example: https://www.lemonde.fr/international/article/2019/08/15/etats-unis-des-employes-de-google-se-positionnent-contre-un-eventuel-contrat-avec-les-services-de-l-immigration_5499529_3210.html or https://www.linkedin.com/posts/ferdinand-richter-16736618_ecosia-takes-radical-steps-to-support-climate-activity-6567706349193486336-hknT
[5] The result of the Swiss referendum on full currency

Our leaders are playing debt versus climate poker