A major survey conducted by the NGOs Unearthed-Greenpeace and Public Eye reveals that five of the world's largest pesticide manufacturers derive more than one-third of their revenues from the sale of chemicals with proven hazards to human and animal health and the environment. Agrochemical giants such as BASF, Bayer, Corteva, FMC and Syngenta are estimated to generate billions of dollars in revenue from chemicals that regulators have determined to pose health risks, such as cancer or reproductive disorders. The survey also reveals that these companies earned $1 billion last year from bee-killing products that are banned in Europe but sold worldwide. Plunged into the opaque world of toxic products.

The Swiss association Public Eye and the British branch of Greenpeace, Unearthed, have had access to a mine of data confidential information kept by the agro-industrial intelligence society Phillips McDougall. This company conducts detailed market research worldwide and sells databases and information to pesticide companies. NGOs have obtained the databases of companies that are part of the federation. CropLife.

This name is unknown to the general public, but it is nevertheless that of a powerful international organization that operates discreetly on all continents to defend the interests of the agrochemical giants. A lobbying megastructure. This organization brings together the " big five "Five multinational companies make their fortune from the sale of pesticides: the German companies Bayer (including Monsanto) and BASF, the American companies Corteva Agriscience and FMC and the Swiss company Syngenta. These five companies alone control more than two-thirds (65 %) of the world market, a market that is worth a considerable 57.6 billion dollars.

To conduct their surveythe two NGOs combed through this set of chemical sales data by cross-referencing them with the list International Workshop on Highly Hazardous Pesticides (HHP) established by the Pesticide Action Network (PAN). This network, created in 1982, is composed of more than 600 NGOs, institutions and scientists from over 90 countries working to promote and adopt environmentally sound and sustainable agricultural alternatives and practices to replace the use of hazardous pesticides.

The World Health Organization (WHO) and the Food and Agriculture Organization of the United Nations (FAO) define severely hazardous pesticides as "pesticides that are known to present particularly high levels of acute or chronic hazards to health or the environment according to internationally recognized classification systems. Environmental hazards include problems such as contamination of water sources or "disruption of ecosystem functions" such as pollination. However, both WHO and FAO have never produced a list of severely hazardous pesticides. To fill this gap, Pesticide Action Network International produces the only consolidated list, which is based on classifications made by the WHO, the European Chemicals Agency, the International Agency for Research on Cancer, and the U.S. EPA.

4.8 billion $ in sales of toxic productsThe investigation shows that 41 % of the main products of the agrochemical giants BASF, Bayer, Corteva, FMC and Syngenta contained at least one HHP and that these five companies accounted in 2018 for more than one third (36%) of their worldwide sales of products containing HHP. 4.8 billion came into their coffers in one year from the sale of toxic products. This figure is probably underestimated because the analysis does not cover the entire world market but only the performance of the five CropLife member companies.

Among the Big Five's best-selling flagship products, investigators found a trifle of 54 substances classified as carcinogenic, toxic to reproduction or endocrine disrupters by the WHO and European or American risk assessment agencies.

In retail, the CropLife Five reaped $1.3 billion from the sale of products classified as highly toxic to bees. These products include neonicotinoids produced by Germany's Bayer and Switzerland's Syngenta, which have been permanently banned for outdoor use in the European Union in 2018.

However, thiamethoxam, a neonicotinoid, was, according to the survey, Syngenta's top-selling product in 2018, accounting for 7% of the company's sales ($242.5 million). Similarly, Imidacloprid, another neonicotinoid, was among Bayer's top ten best-selling products with sales of $101 million. In both cases, the main market was Brazil - a country that is home to up to 20 % of biodiversity rest of the world. 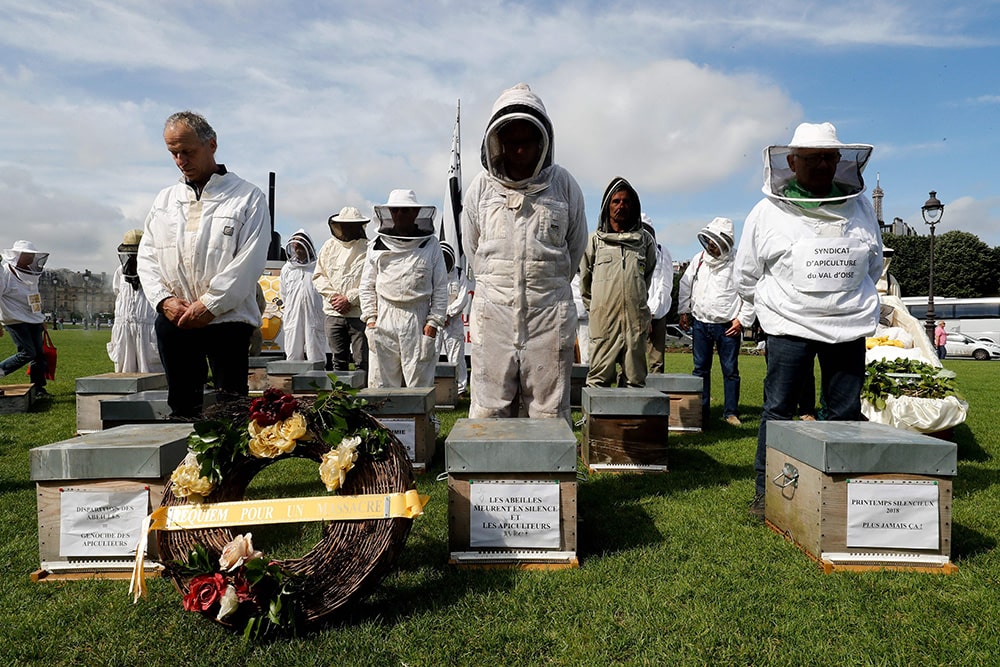 In addition to these neonicotinoids, Unearthed and Public Eye have identified 37 other chemicals sold by CropLife companies that are classified as highly toxic to bees. Among them are chlorfenapyr and fipronil - another chemical linked to the mass death of bees - manufactured by German chemical giant BASF.

Herbicides and glyphosate: $3.6 billion in revenue

3 billion in revenue was generated from the sale of products such as glufosinate, a BASF herbicide, and cyproconazole, a Corteva fungicide, both classified by European authorities as harmful to fertility, sexual function or the unborn child.

But the star is glyphosate, classified by the International Agency for Research on Cancer as a "probable human carcinogen," which was by far the top-selling product by one of CropLife's members, Bayer of Germany. Glyphosate, the world's most popular weed killer, accounts for $1.1 billion in sales by CropLife Group companies. Bayer alone accounted for $840 million of these sales, following the controversial takeover of Roundup manufacturer Monsanto in 2018.

Bayer continues to state that it was "incorrect" to classify the herbicide as highly hazardous simply on the basis of its classification by IARC as a "probable human carcinogen". The company adds that "[t]he firm the world's leading health regulators" - including the USEPA and the European Food Safety Authority - have "repeatedly concluded that our glyphosate products can be used safely as directed and that glyphosate is not a carcinogen. ".

Glyphosate is currently authorised in the European Union until 2022, but several countries, including France, have announced their intention to ban it, even if the EU extends its licence.

In the United States, which is the largest market for Bayer's glyphosate, the company is being sued by tens of thousands of plaintiffs who claim that Roundup gave them cancer. The magazine Fortune recently reported that the company could spend $10 billion to resolve current and future claims.

596 million was made from the sale of pesticides classified as highly toxic by the World Health Organization or deadly if inhaled. Syngenta has made a large majority of these sales with one product, paraquat, a herbicide so toxic that a single sip can kill, which has long been banned in Europe. Sales were thus made in low- and middle-income countries such as Brazil and India, users of these hyper-toxic products in the staple crops of soybean and corn.

Wear masks and gloves and you'll be fine!

Sales realities that are at the antipodes of the official discourse of these companies. CropLife's home page on its website reads: "... We care about our planet and intelligently manage its limited resources ", or " we are committed to sustainable agriculture and the responsible use of plant protection technologies worldwide ".

This lobbying organisation uses carefully considered speeches to counter the criticism that civil society makes of its members' activities. The organization highlights its innovations and its incessant search for alternatives, but argues that its pesticides are a "... a "tool of the trade" for the benefit of its members. an important tool to fight against crop losses " and that they should be used as a last resort to help farmers " produce enough food for a growing population ». The group claims that the majority of HHPs sold in developing countries are not manufactured by its members, and that its own members have "set an example" with measures such as training millions of people in risk-reduction techniques such as wearing protective equipment. In other words, wear masks and gloves and everything will be fine!

He goes on, in the form of an alert: " We are in the midst of an invisible explosion of pesticide use in low- and middle-income countries that are ill-equipped to manage such risks.

Governments do not have sufficient capacity to monitor conditions on countless farms and plantations, analyze food and environmental samples, monitor the health of seasonal and migrant workers, investigate allegations of serious misconduct on farms and plantations, or verify the integrity of information provided by industry-sponsored scientists. From workers' testimonies to the collapse of biodiversity, the impacts are indisputable, but the system is rigged in such a way that they are also impossible to prove. ".

This survey demonstrates, if proof were needed, that the conservation of an industrial agriculture model based on crops impregnated with toxic pesticides is in the interest of only one thing: the companies that manufacture these products. These products have no place in a world that wants to be sustainable and in societies that want to ensure a liveable environment and healthy food for their citizens. As always, it is a matter of political courage in the face of pressure from lobbies and the decision-making capacity of governments.