In order to support businesses in the face of the crisis caused by the coronavirus epidemic, the French government has announced a number of measures. Lnnovative companies believe that the measures are heading in the right direction but that the recovery will have to be thought through over the long term, according to a study by the Richelieu Committee, which has asked its members (startups, innovative SMEs and TWAs) for their opinion on the measures put in place by the public authorities. They were also questioned on their expectations regarding the "exit" from the crisis.

If the results of the survey show an overall satisfaction with the commitments made by the public authorities (77% of the respondents consider that they have not experienced any difficulties with their interlocutors in the State services in the implementation of the Government's announcements), they also show (comments left by the companies in support) that the implementation of these is not always easy; in particular with regard to short-time working and the implementation of measures by the banking sector.

Urgency in the face of the crisis: priorities at the EIF/ITC, taxation and financing

The black spot remains the attitude of many large groups which claim to be attentive to SMEs, which in fact SMEs do not perceive specifically with regard to payment periods, ongoing commercial discussions or deliveries to large groups of orders that were in progress.

Of these, 97% did not notice an acceleration of payments on the last invoices and 95 % did not see the introduction of specific provisions concerning payment deadlines in the context of the crisis. 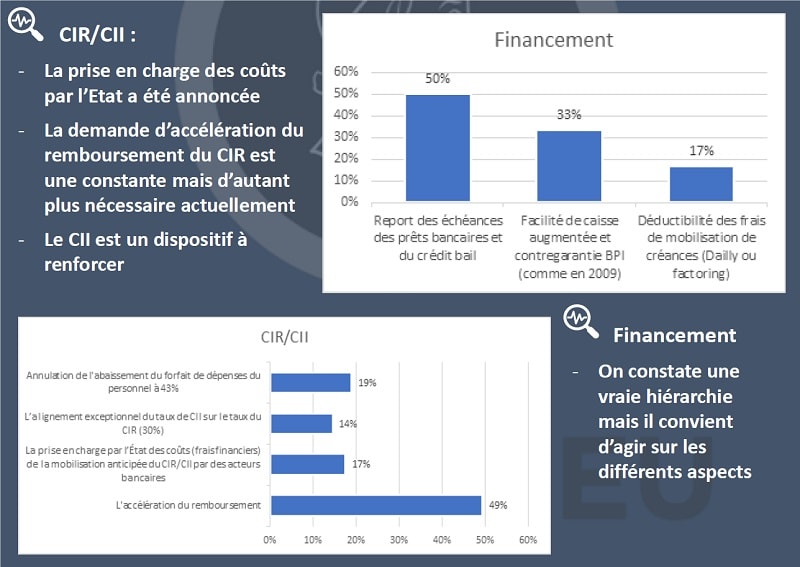 As regards the CIR, the acceleration of its reimbursement is welcomed and has led to a call for its continuation. 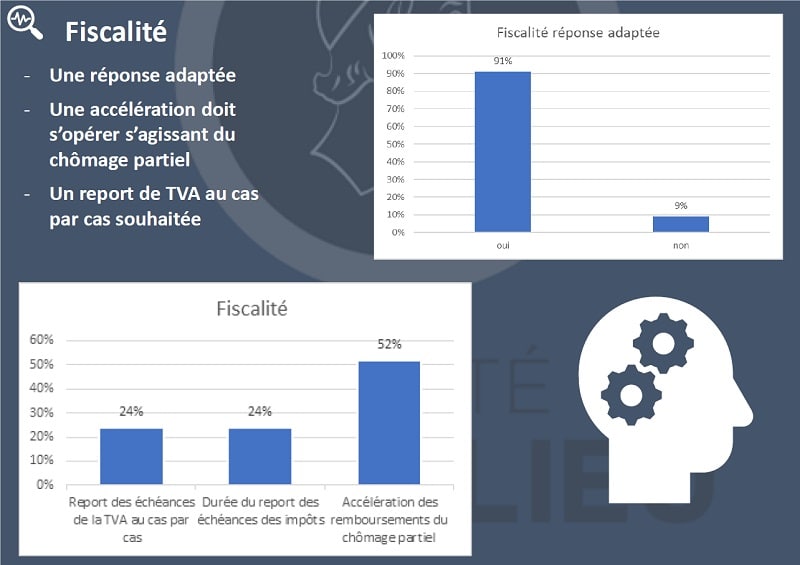 It should also be noted that the visibility given to the exemplary action of business mediation in this period of crisis should be reinforced. As part of the measures to support businesses set up by the Government, the Business Ombudsman is the preferred mechanism for helping to find solutions to any type of dispute that may arise with another company or administration. 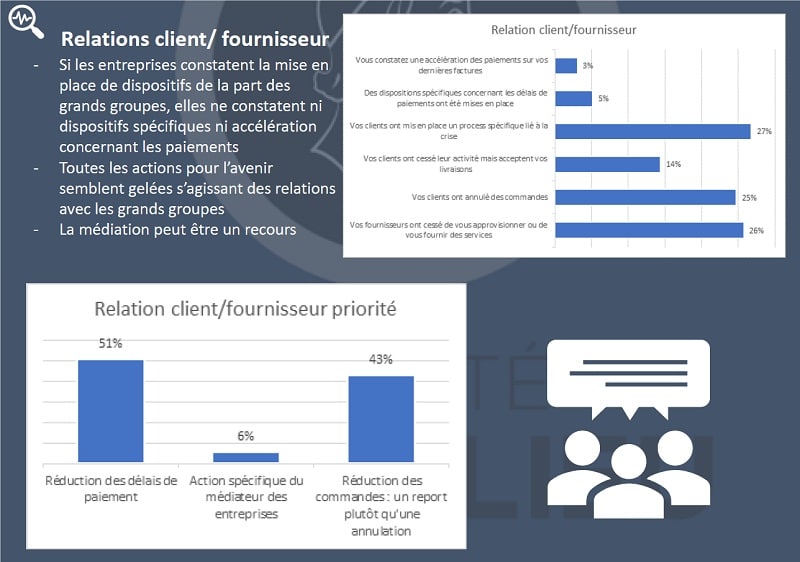 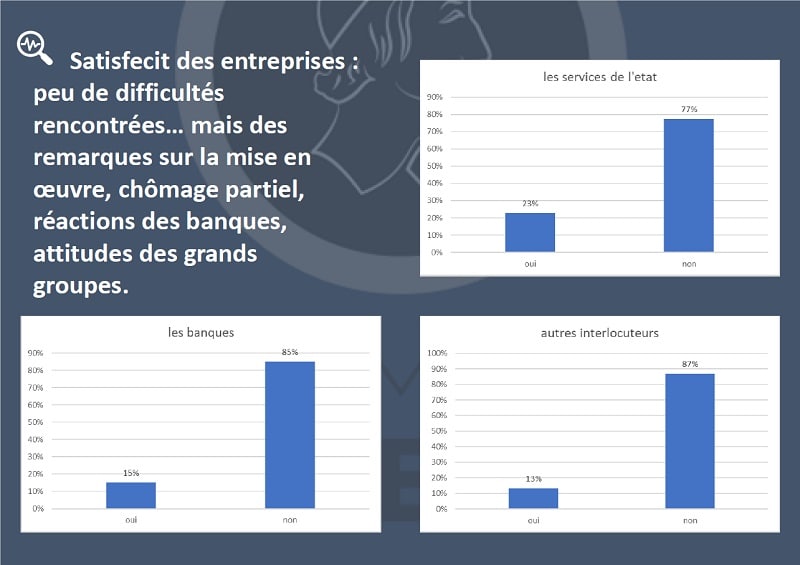 After the crisis: priorities for public authorities to act

As regards the post-crisis period, companies are unanimous in their fear that the end of support measures will come too quickly. Of the priorities to be acted upon by the public authorities, 98 % want the crisis-specific measures to last 6 months or more to preserve cash flow and support the recovery. 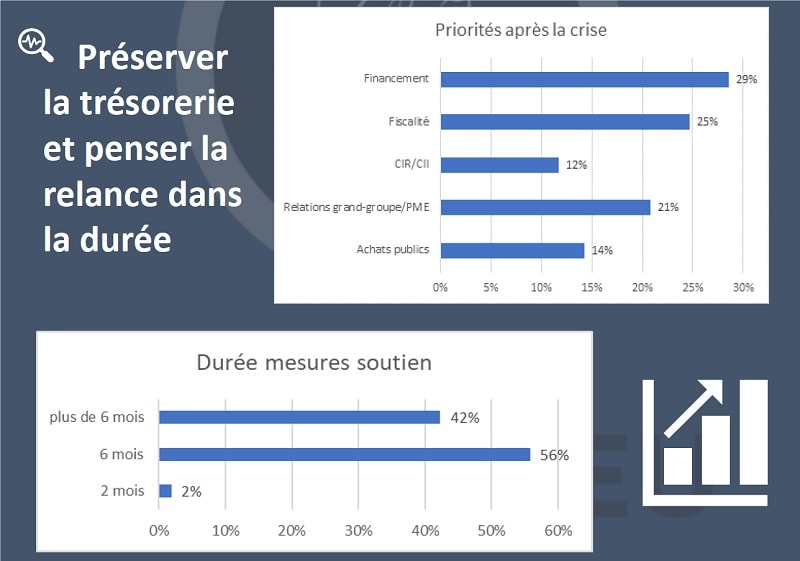 The Richelieu Committee would like the recovery plan to include specific measures for SMEs and innovation: support for innovative public procurement, in particular through experiments encouraged at local authority level, the strengthening of the Innovation Tax Credit (aligning the rate with that of the CIR, raising the ceiling to EUR 1 million and extending the scheme to TWAs) and the strengthening of the status of Young Innovative Company.

A State guarantee scheme of 300 billion euros for loans granted by banks to companies with less than 5,000 employees was set up by the Government on 25 March last to meet the cash flow needs of companies affected by the coronavirus crisis; one-year cash loan. The aim of the scheme is to leave no company on the sidelines. On paper, all companies, regardless of their size or legal form, can access the EMP, with the exception of non-trading property companies, credit institutions and finance companies, as well as companies in receivership proceedings and those that do not meet payment deadlines.

For innovative start-ups, SMEs and ETIs10 billion of loans have already been released under this Loan, which, it should be remembered, was set up as a matter of urgency to help companies facing cash flow problems.

However, it needs to be adapted to be better understood and to give more visibility to companies expecting a lasting economic crisis.

Companies note a heterogeneous appropriation of the system depending on the region and their usual banking contacts. While the time needed to adapt and disseminate instructions to all their advisers in the regions is understandable, this heterogeneity must quickly stop, otherwise there is a risk of creating inequalities and misunderstanding on the part of companies and contributing to ultimately to discredit the device as a whole.

The Richelieu Committee asks the State to avoid the effects of announcement and to be more precise on the eligibility and implementation criteria. It also asks the banks to ensure that the system is applied uniformly within their respective networks and to continue to do their utmost to provide rapid responses to the EICs (Innovation and Growth Companies).
Finally, he asked the Credit Mediation Office to be particularly vigilant in correcting abuses and responding to legitimate requests from companies.

Furthermore, one third of the companies believe that they are not eligible for the EMP. On this point, an educational effort is essential to recall that while the scheme excludes a whole series of players from the benefit of the EMP (SCI, companies in difficulty according to European criteria, etc.), it particularly supports applicants meeting certain conditions (e.g. company rated 5+ a minima / cf. CP of the Ministry of the Economy and the FFB of 1 April) but does not mechanically exclude others.
As credit mediator Frederic Visnovsky explained to La tribune, "...the credit mediator, Frederic Visnovsky, " In principle, a company that is well rated by the Banque de France is supposed to benefit from a quasi-systematic agreement from its commercial bank: up to a rating of 5+, the approval of the EMP by commercial banks must be quasi automatic. Then, a company rated 6 by the Banque de France is a company with a low level of equity capital or profitability or which is heavily indebted. It is a company that will have more difficulty repaying its loan. In this case, there is no systematic refusal but a case-by-case approach on the part of the commercial bank. "

Alain Griset, President of the Union des entreprises de proximité (U2P), explained in Capital on April 14 that "the Candidates for this assistance, if they are numerous, see the study of their file progressing slowly. "He also noted that" On the EMP, we have 150,000 files being processed, compared to 900,000 that benefit from the solidarity fund". Explaining also in The Tribune as " Banks have human resource problems. They are not accustomed to handling such a large volume of applications. Processes are not adapted and almost automaticity is not found in the field. "

In this respect, it is desirable that specific eligibility criteria be applied to innovative enterprises (which are, moreover, well defined in the mechanism for calculating the ceilings). These criteria are intended to take account of the specific features of their financial structure and to mitigate the impact of the European definition of firms in difficulty, which to date excludes from the EGE scheme a number of perfectly profitable and solvent firms, whether or not they are recently created (start-ups, SMEs and ETIs).

The Committee is also willing to act as an educational intermediary in liaison with government departments, the banking sector and the Credit Mediation Office, a Banque de France body set up in 2008 at the time of the financial crisis to help companies that are refused financing by credit institutions. Frédéric Visnovsky explains in La Tribune that " The activity of the National Credit Mediation Office has fallen steadily to just over 1,000 cases in 2019. But we note a significant increase in March with 731 eligible files. This trend is accelerating with, in the week of 6 April alone, 645 eligible files. The number of files registered in one day is therefore equivalent to what we had in a month before the crisis. "

The current application to the Credit Mediation Office would amount to more than EUR 20 million to date.

Finally, companies regret not knowing the interest rates that will be offered by their banks in the next 10 to 12 months. (1) and the overwhelming majority (80%) consider this to be a source of concern and anxiety.

Since the PGE is a product on which the banks have undertaken not to compete with each other, the Richelieu Committee calls on the State to specify and frame the arrangements for calculating the interest rates that will be offered to companies at the end of the first 12 months. This may be by reference to a market rate, coupled with a margin of deviation from this rate (secured corridor). With regard to the latter point, it is essential that it be considered in the context of the recovery plan.

For all practical information :

(1) For those who will choose to amortize this loan over 3, 4 or 5 years at the end of the first year of the loan at a rate of 0

Covid-19: 50 % of the world's workforce at risk of losing its livelihoods