After the global health crisis of VIDOC-19, what would be our greatest risk? The philosopher Hannah Arendt said, "A crisis only becomes catastrophic if we respond to it with preconceived ideas. Indeed, it does, the risk would be to resume our lives on the same basis as before, or even worse, for lack of the means to think and act differently. Based on this hypothesis, the prospectivist and theorist of collaborative economy, Michel Bauwens, and Christine Marsan, psycho-sociologist, launch "conversations" in the form of video interviews to try to apprehend our near future, Thinking Tomorrow. First guest: Bernard Stiegler.

Michel Bauwens (1) and Christine Marsan (2) propose to create a 360° panorama of the elements on which to focus our attention in order to apprehend our near and more distant future with new conceptual and pragmatic bases. To do so, they invite each week a major player in this transition to bring, according to his or her competence, expertise, keys to political and economic understanding (mainly questioned by Michel Bauwens), with the light of the human sciences (mainly solicited by Christine Marsan).

Purpose? To mobilize plural and complementary opinions to dare a rich, nourishing and contradictory vision offering listeners an independent opinion.. Thinking Tomorrow brings in a chaotic global context a stone to the awareness in order to facilitate individual and collective behavioural changes.
The stakes of the mutation of our civilization, before Covid-19 and since, have become crucial. 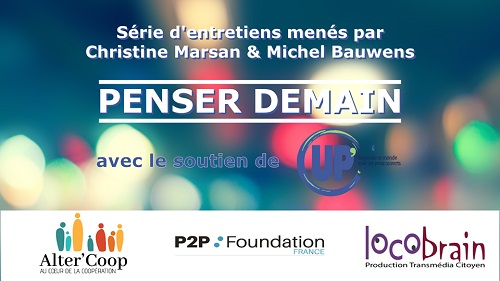 Launch of the Thinking Tomorrow : Conversations between Michel Bauwens and Christine Marsan and their guests this Friday, May 8th at 6pm by a live on the Facebook page. : https://www.facebook.com/events/576324142988024/

First guest in this series of video interviews: Bernard Stiegler

No more Bernard Stiegler introductions. Philosopher, director of the Institute for Research and Innovation (IRI) and president of Ars Industrialis, the International Association for an Industrial Policy on Mind Technologies, Bernard Stiegler is also the author of numerous books, including the latest " What's called dressing ? "(Edition Les Liens qui libèrent, 2018).
With Ars Industrialis and the Institut de Recherche et d'Innovation du centre Georges Pompidou, he has been pursuing for several decades his great project of societal transformation based on negentropy, collaboration and care. His experiments attempt to restore society in a local and collaborative way, as in Seine-Saint-Denis in Saint-Ouen, Aubervilliers, where he undertakes life-size experiments to test his holistic method for education, surrounding himself with teachers, parents, psychologists, artists, jurists, researchers in hard and human sciences. For him, it is "a paradigm, a vision of human relations and morality that we want to develop for society. Mutualization and transdisciplinarity are emerging as vectors for laying a sound foundation for a new social edifice, free from consumerism, where knowledge, skills and know-how are a common good, a resource accessible to all. » (Source : France cultureFebruary 2020).

Interview by Bernard Stiegler part 1/3: What vision of the Transition in its radicality?

Interview by Bernard Stiegler part 3/3: A role for the Communes in the Transition?

Section directed by Michel Bauwens and Christine Marsan, in partnership with the P2P Foundationand Alter'Coop.

(1) Author of " Saving the world: towards a post-capitalist economy with peer-to-peer "(Editions LLL, 2015) and the "Manifesto for a truly collaborative economy: towards a society of commonalities "(Editions Charles Léopold Mayer, 2017).
(2) Christine Marsan is a psycho-sociologist, coach, consultant in the accompaniment of transformations and mutations and author of numerous books, such as "... the "Transformation and mutation" of the French society "... and "... the French language". Succeeding in change: How to get out of individual and collective blockages? "(Edition of Boeck, 2015); "Little exercise book to dare to change one's life "(Edition Jouvence, 2017)

New mobility solutions at the heart of the health crisis

Financing the Common Good? Yes we can!

Do you know this little Sufi story? It's nighttime; a man

After the global health crisis of VIDOC-19, what would be our biggest