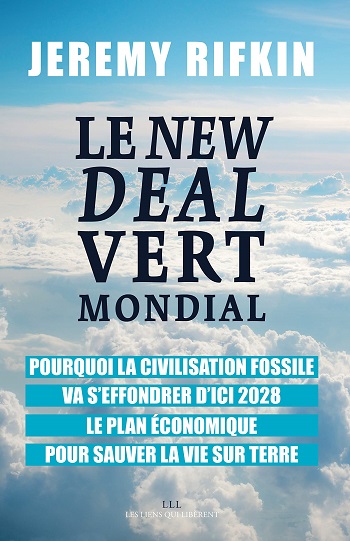 After having theorized the Third Industrial Revolution ("The Third Industrial Revolution", LLL, 2012), Jeremy Rifkin tackles the notion of the "Green New Deal". It is an economic and social project, the result of a global awareness of the state of the planet. The goal: to save life on Earth, quite simply.
Jeremy Rifkin, who is working hand in hand with governments to promote this new green deal - in the United States, Europe and China - offers a real how-to guide.

A comprehensive transition handbook that would enable the production of 100 % of electricity from clean and renewable sources; improve and increase the efficiency of the energy network, the transport network or the buildings sector; invest in research and development of green technologies or offer new jobs born of this new economy. Time is short and the scientific consensus can no longer be questioned: man-made climate change resulting from the burning of fossil fuels will lead humanity to the sixth great extinction of life on Earth. But solutions exist everywhere and are within our reach. Today, the interests of political, economic and financial leaders converge with those of citizens: this is what the famous futurist demonstrates.

Jeremy Rifkin is one of the most popular social thinkers of our time, and the author of some twenty best-sellers, including A new consciousness for a world in crisis, The Age of Access, The End of Work, The Third Industrial Revolution and The New Zero Marginal Cost Society (LLL). His books have been translated into over thirty-five languages.

The forest lover of the sea

The climate that hides the forest