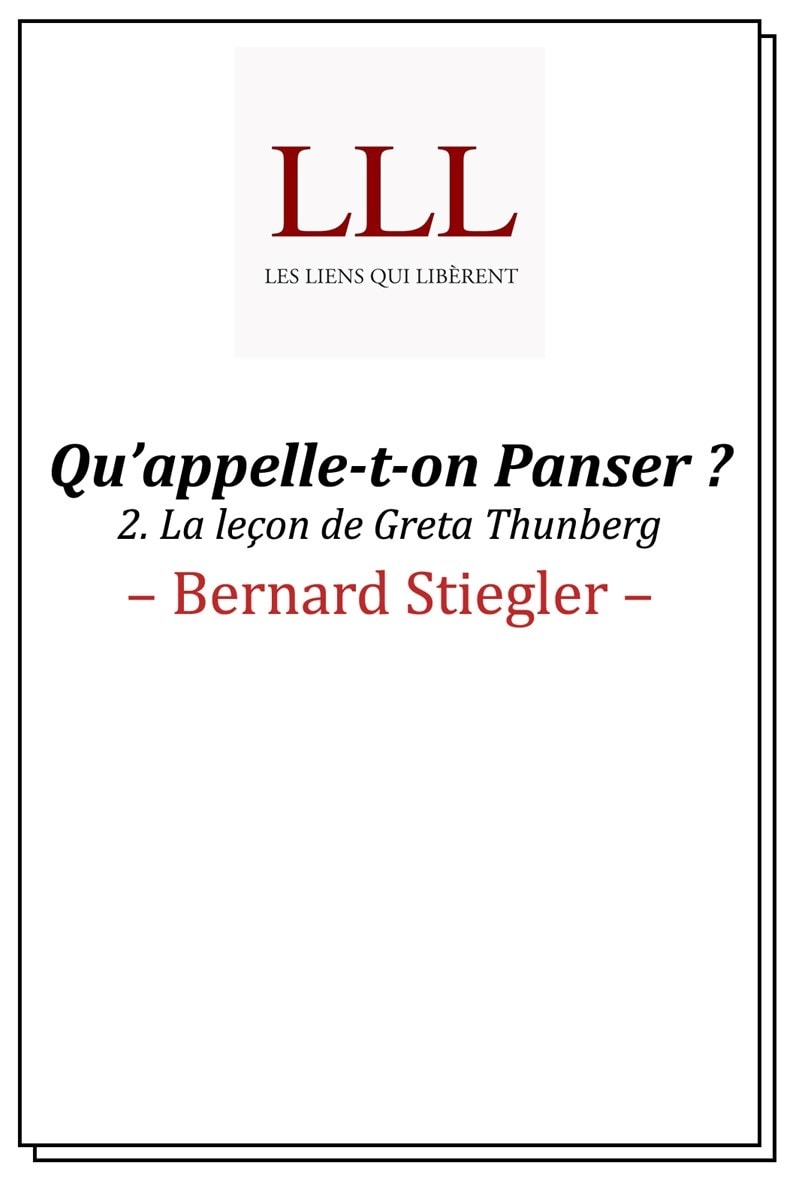 Dressing constitutes the task par excellence of the 21st century This is what Greta Thunberg, like Antigone, teaches like no one before her to adults who have become irresponsible. Here is an important work by the philosopher Bernard Stiegler, to understand the great changes at work in our contemporary societies.

The lesson of Greta Thunberg tries both to hear what it tells us and to respond to it - to "take responsibility", both theoretically and practically, and with reference to research currently being experimented in Seine Saint-Denis in the context of a Contributory Learning Territory.

READ IN UP' : Bernard Stiegler launches a disruptive project in Seine Saint-Denis: to make it a "contributory learner" territory

This book, which is therefore a response to the calls of Greta Thunberg and the French representatives of Youth for climateIn this paper, the Secretary-General of the United Nations, Antonio Guterres, discusses the current debate on collapsology ("science of collapse"), the definition of the Anthropocene era, and the alternative notion of Capitalocene proposed by Jason Moore.

The Anthropocene era is first of all the increase of entropy rates in the thermodynamic, biological and informational fields. In the first volume of What's a bandage?, released in November 2018, it had been argued that Nietzsche was overwhelmed by the thesis of entropy - and by the correlative thesis of the thermal death of the universe.

In The lesson of Greta ThunbergThe aim is to overcome a theoretical blockage that has arisen during the 20th century around the notions of entropy and neguentropy. If both public and private authorities are doing nothing, despite the warnings of the IPCC on climate change and the IBPS on the destruction of biodiversity, it is first of all because they do not know how to do it.

This is so because the theoretical work prior to this how to do - and to answer the question what to do? - hasn't been hired yet.

Contrary to what Martin Heidegger claimed, science thinks. However, there is a feeling that it does not... rumen plusor almost no more. To understand the reasons for this, an interpretation of Bergson's latest work will be offered.The two sources of morality and religion... (1932), in order to show, on the one hand, that it seems to herald the immense challenges that constitute the stakes of the twenty-first century ("Humanity groans, half crushed under the weight of the progress it has made", he wrote), and on the other hand that it is by reading it that one can both hear Greta Thunberg and respond to him: everything happens as if he saw it coming.

Bernard Stiegler is a philosopher. He founded the philosophical think tank Ars industrialis and also directs the Institute for Research and Innovation (IRI) which he created within the Georges-Pompidou Centre. Author of numerous works, including Dans la disruption (LLL editions), the core of his research focuses on the challenges of current changes - social, political, economic, psychological - brought about by technological development and changes in society.

The climate that hides the forest