Handbook of Political Action - For Those Who Want to Act, by Michael Walzer - First Parallel Edition, October 2019 - 176 Pages 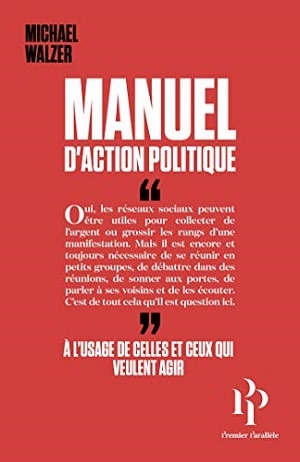 1971. Michael Walzer is 36 years old; he teaches at Harvard and is an active campaigner against the Vietnam War. The United States had just invaded Cambodia when he wrote, within a few weeks, what would become this Political Action Handbook: a practical and intellectual guide for anyone wishing to get involved.

How to ensure that the cause defended will be to the benefit of as many people as possible? What strategy should be adopted to win the case? How can we ensure that our objectives are not unrealistic? How to deal with internal disagreements? How do you convince your opponents?

2018, Trump is in power. American students want to organize. Their teacher is photocopying his copy of the textbook, which has been unavailable for a long time. "Why is there nothing like this in bookstores?" they ask him. There, they say, is the answer to all their questions. In 2019, the New York Review of Booksle will be reissued.

Intentionally written without reference to the context of the time by the man who would become one of the greatest political thinkers of recent years, this handbook captures by its relevance.

This serious and witty book is an indispensable resource for activists. A practical cult guide written by one of the most important figures of the American left.

An indispensable resource for activists, a source of political reflection for all, and a tremendously satisfying call to action.

Yes, social networks can be useful to raise money or to expand the ranks of an event. But it is still necessary to meet in small groups, debate in meetings, ring the doorbell, talk to your neighbours and listen to them. That is what we are talking about here.

Born in 1935, Michael Walzer is a professor at the Institute for Advanced Studies at Princeton University. He is one of the great American philosophers of our time, the author of an abundant body of work among which stand out two books considered classics of political thought: Spheres of Justice (Seuil, 1997) and Just and Unjust Wars (Belin, 1999). At the time of writing, in 1971, Michael Walzer was a professor of politics at Harvard and an active activist.

Is the book environmentally friendly?