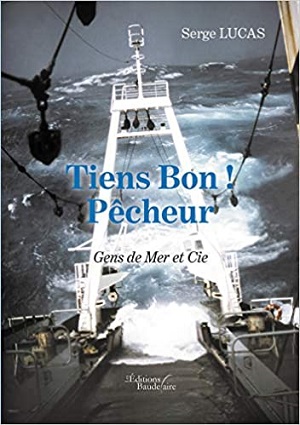 "The fishery is dying," some say with tremolos in their voices. "Fishing is emptying the seas of all those innocent - yet succulent - fish, crustaceans and molluscs," others proclaim.

Ain FinlandOne of the last nine French factory trawlers in 1978, one of the last deep-sea factory trawlers in 1978, is going to hunt for pink shrimp in the Davis Strait, west of Greenland... Facts and gestures, worries and hopes have been collected since the departure from Bordeaux until the return to Boulogne sur Mer, 70 days later! The crew has endured storms, snow, ice, pack ice, earned the "bread of their children" and the benefits of their armament.

Newfoundlanders who, during this voyage, learned of the death of Jacques Brel, followed the disappearance of Alain Colas, the wreck of a trawler from Lorient (ten missing) from a German cargo ship (28 missing), ... during a terrible storm that also shook them.

Other fisheries are evoked, all experienced at sea... highlights from the History of the French Navy (Richelieu, Colbert, Denis Papin, Samuel Morse, up to... Marcel Proust); the creation of the Glénans... and a curious observation of the Médoc from the Gironde... And afterwards, there was another trip to Greenland with Jean-Louis Etienne.

And some of the fictions that still inspire the open sea...

1962: "I am listening! ", the first sentence of Pierre-René Wolf, director of the Paris-Normandy regional daily newspaper in Rouen, where I was born in 1937. He trained me in journalism. 1968: "You're a journalist! What bullshit are you going to tell again? "Michel Chardon, a fisherman from Dieppe.

I was writing. I photographed. I didn't get seasick... My turn, the small one and the big one! The first one taught me to listen and testify. The second to venture beyond the docks. Since 1978, I've been boarding fishing boats (and others) for the time of a tide.

Political Action Handbook - For those who want to act, by Michael Walzer

What's up to us