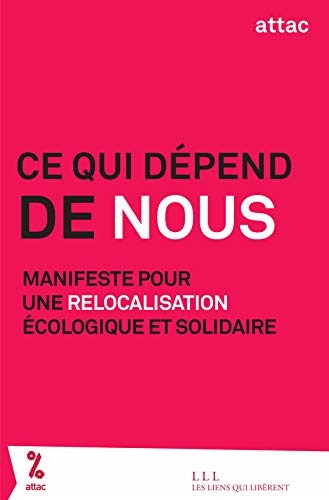 After the pandemic, the word "relocation" is now on everyone's lips. Minimalist and cosmetic in its neo-liberal version, hateful in its nationalist version, relocation can also be ecological and supportive. It is this path, capable of broadly federating, that this manifesto details, to which activists and researchers from various backgrounds have contributed at the initiative of the Attac association.

If productivist capitalism impoverishes the poor and devastates the biosphere, this manifesto proposes, based on the action of social movements, how to redefine and redistribute wealth, democratize society and the economy, affirm inclusive solidarity and the importance of our interdependence with the Earth and living things.

Social and anti-globalization movements have been working for more than twenty years, in alliance with scientists, to conceive and experiment with alternatives: they are now mature, credible and radical. In order to impose them on the dominant powers, we will have to share them and improve them with the greatest number of people, and nourish our struggles with new complicities and alliances. This is "what depends on us".

"The current health crisis shows that life can prevail - at least temporarily - over the logic of an entire economy based on financial profitability. Emmanuel Macron, Xi Jinping, Donald Trump or Boris Johnson have had to decide, completely against the grain of the policies they pursue and for fear of popular reaction, to stop growth, suspend air transport and world trade, unblock thousands of billions, temporarily disrupt lifestyles. In human and collective affairs, where there is a will, there is a way: this lesson has been learned and we will not forget it."

Attac is an association founded in 1998 that fights so that citizens can, through democratic action, reappropriate together the future of our world, today subject to the law of speculation and financial markets. It is present in about fifty countries and active in the anti-globalization movement and social forums.