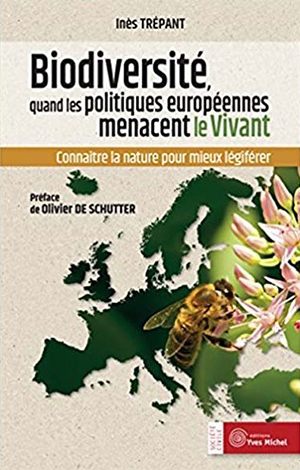 Cand book is a plea for a decompartmentalization of European policies in order to effectively safeguard biodiversity in Europe. The book was published in March 2017 but is very much in line with the news of the European elections on 26 May 2019. To be reread urgently!
The share of human responsibility is total. It is even too late for some species and ecosystems, but if we change our working habits now, if we consume in a reasoned way, biodiversity will be able to regain its rights and find a balance and interaction in space and time.
The protection of biodiversity is a major societal issue. However, the European Union systematically fails to meet the objectives it has set itself in this area. How can this be explained? What is at stake? And above all, how can we remedy it?
The European economic model, which bears the stamp of neo-liberal ideology, is proving to be deadly for biodiversity. Industrial agriculture, "all-technological" excesses and the mirages of the bio-economy are sowing the seeds of unprecedented ecological upheavals. But there is no fatality. Nature and the laws that govern it are a fertile source of inspiration.
Through an analysis of seven European mechanisms of biodiversity destruction, Inès Trépant builds bridges between the political world and the naturalist world. As the IPBES (Intergovernmental Platform on Biodiversity and Ecosystem Services) report states - current policies do not promote biodiversity.
At the end of April 2019, the 150 IPBES experts delivered their most comprehensive report to date. It is the first intergovernmental report of its kind. The President, Sir Robert Watson, said: "The health of the ecosystems on which we depend, as well as all other species, is degrading faster than ever before. We are eroding the very foundations of our economies, livelihoods, food security, health and quality of life around the world. "The report estimates that about 1 million species of animals and plants are now threatened with extinction, especially in the coming decades, which is unprecedented in human history.
The author highlights the urgent need to decompartmentalize environmental, agricultural, energy, industrial and commercial policies in Europe, placing biodiversity back at the heart of the European economic project. A radical change is needed and alternatives exist to get out of the ever-increasing "growth" and reconnect with nature.
Inès Trépant, a graduate in International Politics and European Studies, has been working since 2004 at the European Parliament, first as a political advisor for the Economic and Monetary Affairs Committee and, since 2010, for the Development Committee. Together with Paul Lannoye, she edited the book "World Trade: Democracy Confiscated", published by Yves Michel in 2015. Inès Trépant is also a nature guide and a founding member of the GRAPPE association (Groupe de Réflexion et d'Action pour une Politique Ecologique).
Share
Tweet
Share
WhatsApp
Email
Print
Login
0 Comments
Inline Feedbacks
View all comments
Previous article

Cataclysms - An Environmental History of Humanity