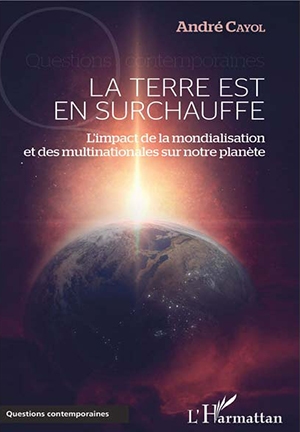 The Earth is Overheating: The Impact of Globalization and Multinationals on our Planet, by André Cayol

AAsbert Einstein said, "You don't solve a problem with the ways of thinking that created it. "In the cosmos, the Earth seems to be the only planet that supports human life. But man is changing the climate.
At the same time, people feel abandoned by their rulers who can no longer act because they no longer control anything. Since the creation of the WTO, the advocates of globalisation have thus taken away the powers of the States and entrusted them to multinationals. They can now transfer products and money freely and choose the best countries in the world to manufacture, the best countries to sell and the best countries to declare their profits.
In order to explain these changes, the author analyses the events that he has most often experienced and whose sequence has created this great risk.
The world must change course. In order to do so, it is necessary to federate all States, apply international law, and seek out and punish those guilty of ecocide in all countries.
This book outlines possible causes and actions for companies, politicians, citizens, in the world and in everyday life, but also by engaging in larger projects. It is about preserving the planet for our children. Urgency is vital!
"France has changed. We no longer pollute, but we don't manufacture much anymore and we import a lot. To balance the trade balance, which has been in deficit since 2004, we are selling off our French "family jewels", our ministerial buildings, barracks, airports, etc.
The IPCC scientists promise us a climatic catastrophe, but many do not believe in it, pollution is abstract as long as we do not feel it, as long as we see the sun, we do not believe in it ... Man accepts constraining changes when he has his senses on the alert and his back to the wall! […]
How did we build such an aberrant world? How did we reach such a large number of unemployed people in France? What are the French and global dysfunctions that have led to the de-industrialization of our countries and growing pollution?
Edgar Morin encourages us to think globally, to take complexity into account, and to look for links between all the elements. When we pull a thread in this complex world, we realize that everything is connected and that, if we do nothing, the human race will be lost ...
In this book, André Cayol tries to pull the few threads and shed new light on certain disastrous situations in France and around the world, to understand how it all came about. »
André Cayol is an engineer. He worked for ten years in industry and then worked as a teacher-researcher at the Université de technologie de Compiègne (UTC). His research focused on design and innovation. Today, he is a jury member of the Design label awarded by the French Institute of Design (IFD) and publishes articles on the state of the industry, France and the Earth in the web magazine UP' Magazine .
Share
Tweet
Share
WhatsApp
Email
Print
Login
0 Comments
Inline Feedbacks
View all comments
Previous article

The Inspiring Company: Does money motivate or not?