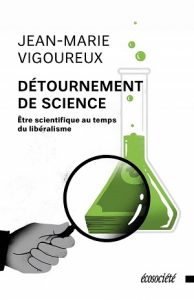 Would scientific development be responsible for the destruction of nature, biodiversity, climate change and pollution?

Science is increasingly at the service of big industry and ignores human development, to the point where some even question its relevance. This is the observation of Jean-Marie Vigoureux: a situation that is not without worrying him at a time when humanity is facing major challenges.

In his capacity as a citizen and teacher-researcher, the author strongly denounces the abuses of science and seeks to rehabilitate it in its emancipatory potential. He thus postulates that science is in crisis first of all because of the disappointed hopes of those who saw in it a means of achieving social justice and who now see it contributing to the destruction of the biosphere. The author attempts to understand the reasons for this failure by questioning the science-economy relationship and denouncing the commodification of science and its technical applications.

The author first proposes a philosophical and historical genealogy of science since the beginning of the industrial revolution. He focuses particularly on the 19th century, when scientism was established as a universal idea, and highlights the fact that "after three and a half centuries of fundamental discoveries and unprecedented technical developments ... science has not silenced misfortune or reduced injustice". The reflection leads to one observation: basically, it is not so much the failure of science that should be denounced as that of thehomo capitalisticus. The quest for an ethical and profitable science thus involves a challenge to Promethean liberalism and a democratic refoundation, at a time when transhumanism and environmental problems threaten the essence and existence of humanity.

It is becoming increasingly important for Jean-Marie Vigoureux to invent a new, fairer model of society and to allow the development of a true citizen science.

Jean-Marie Vigoureux is Professor of Physics Emeritus at the University of Bourgogne Franche-Comté. He is a teacher-researcher, lecturer and author of popular science books including "Newton's Apples" (2003), "Einstein's Quest" (2005), "The Universe in Perspective" (2006) and "Water, a vital element, a threatened treasure" (2019).

Schrödinger at the beach

Schrödinger at the beach

Schrödinger at the beach - Quantum physics in a transat of