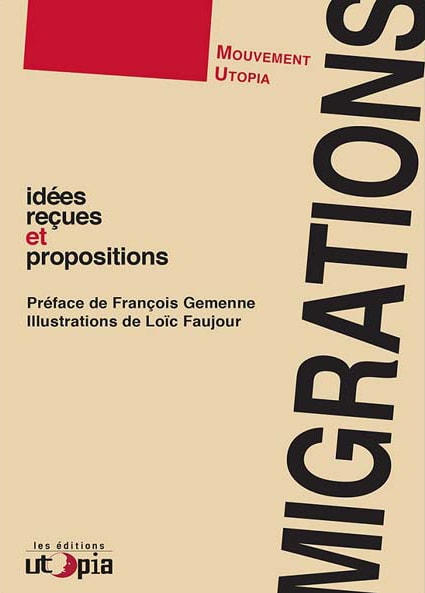 Migration: Ideas and proposals of the Utopia Movement

Managing migration in an era of climate change and democratic crises is an increasingly central challenge.

Migration is both a reality and a fantasy. They are the subject of political rather than social or economic stakes and have become a focus of electoral marketing. In a context of climate change and democratic crises, the management of migration will take on an increasingly central role. Hence the importance of addressing the issue of reception without political ulterior motives or demagoguery. Based on the work of experts, studies and reports from international institutions and associations, this book aims to deconstruct the main preconceived ideas on migration and put forward proposals to respond to the issues and challenges. How can we resign ourselves to the Mediterranean becoming a cemetery? Our migration policy, both inhuman and unworthy, is also, as we demonstrate in this book, inefficient and costly, both socially and economically. Its impasse is total and after decades of ideological intoxication, it is to a real reversal of perspective that this book invites us. As their history attests, migration is also a social, cultural and economic asset.

This book hunts down preconceived ideas and proposes answers to migration issues and challenges, both through the work of experts and through studies and reports from international institutions and associations.

"And how can we resign ourselves to the Mediterranean being a cemetery? The current migration policy is at the same time violent, inhuman and unworthy, but moreover, as we demonstrate in this book, inoperative and harmful, socially and economically. Yet migration can also be a wealth, socially, culturally and economically, as their history in France attests. Provided, of course, that we are neither in fantasy nor in denial and that we are not satisfied with a security or simplistic identity reading grid. So what policies and attitudes should be adopted with regard to migration but also with regard to immigrants? Positions of principle are not enough. Unfortunately, they are too often used as an alibi for good conscience. We also need to clarify how these principles could be implemented: what support and work with migrants, what reception and integration arrangements, what paths we want to take, what legislation to propose and what resources we are prepared to devote to this. For the principles, we have a clear reference. It is Article 13 of the 1948 Universal Declaration of Human Rights: Everyone has the right to freedom of movement and residence within the borders of each State - Everyone has the right to leave any country, including his own, and to return to his country. However, France, a country known as a country of human rights, does not respect this commitment which, like many other countries, it signed more than seventy years ago. Nor does it really respect other texts, such as the European Convention on Human Rights or the International Convention on the Rights of the Child, to mention only the most emblematic. »

A link between the social movement, the political world and the intellectual world, the Utopia Movement is a popular education cooperative that aims to develop a project for a united and friendly society, ecologically sustainable, whose objective is the Buen Vivir. After Undocumented Migrants, Nuclear, Work, Food, Communes and Democracy, the Utopia Movement has devoted an important part of its collective reflection to Migration.

Behind the scenes of the world of natural disasters