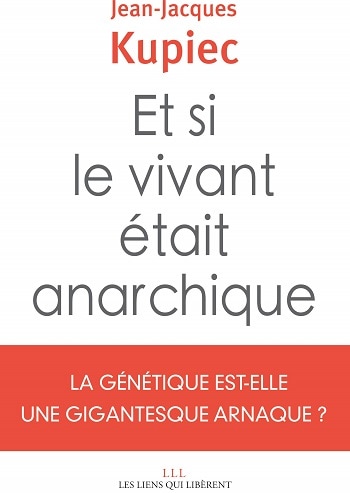 Does the gene determine the essential physical and psychic characteristics of the individual? In any case, this is what genetics has been proclaiming for decades. Jean-Jacques Kupiec, the author of the best-seller "Ni Dieu ni gène" (with Pierre Sonigo, Edition du Seuil), questions this assertion by demonstrating the central role of chance in the face of determinism. So that the anarchic part of the living can finally be recognized.

The idea of genetics is very simple: the characteristics of living beings are transmitted from parents to children by entities called "genes" that represent them. Since the beginning of the 20th century a multitude of facts have validated this credo. But instead of abandoning it, geneticists naively tried to "save it" by adding additional factors such as the influence of the environment.

For the author, a revolution is necessary in the life sciences. Genetics - which is fundamentally deterministic - does not stand up to the sum of experimental data demonstrating that chance is omnipresent in life, including in the functioning of "genes". Genetics, whether in its strong version (a gene determines a character of a living being) or in its softened version called "epigenetics" (the determinism of the gene is tempered by other factors, including the environment), is thus shaken in its foundations: disorder reigns where a programme was supposed to reign. But rather than abandoning this erroneous theory, biologists practice a double discourse of constantly oscillating between the two versions of genetics (strong and soft), which has the effect of transforming it into an infallible ideology.

To get out of this impasse, the author explains that it is time to accept the anarchic part of life, i.e. the random variation that is its primary property, and to draw the consequences. There is no intrinsic biological order that would determine life. Living beings are not centralized societies of cells obeying the orders of the genome or the environment, but communities of anarchistic cells, free and active in their own destiny, thanks to the chance they use for their own benefit. Neither gene nor environment, a new path is opening up here for biological research.

Jean-Jacques Kupiec (Doctor of Biology, Qualified to direct research) first practiced molecular biology as a research engineer at Inserm. Among other things, he cloned and sequenced several viral genomes. He then created and supervised for fifteen years the History and Philosophy of Biology seminar at the Cavaillès Centre (ENS). He is the author of a theory that led to experiments demonstrating the crucial role played by chance in embryonic development.