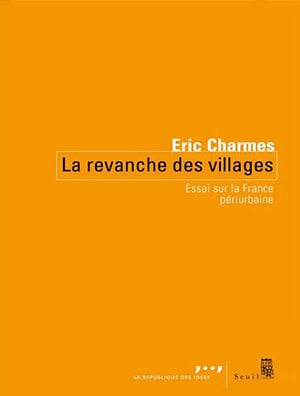 The Revenge of the Villages, by Eric Charmes

L’The opposition between town and country is outdated. Attracted by the dream of "the city in the country", peri-urban dwellers now represent a quarter of the French population. In some cities, they have even become the majority. This silent revolution is transforming the countryside, where pavilions, shopping centres and business parks dominate the landscape. It is also changing the social geography of France: very often, the working classes live in the centre, while the middle classes find themselves in the peri-urban areas, where they enjoy the advantages of both the city and the countryside. After having been victims of the rural exodus, the villages took their revenge.
Read in UP' the full review article "The opposition between town and country would be outdated. The revenge of the villages?
Éric Charmes is research director at the ENTPE in Vaulx-en-Velin. His publications include Villes rêvées, villes durables (Gallimard, 2009, with Taoufik Souami) and La Ville émiettée. Essai sur la clubbisation de la vie urbaine (PUF, 2011).
Share
Tweet
Share
WhatsApp
Email
Print
Login
0 Comments
Inline Feedbacks
View all comments
Next article

The small Republic of Saillans

Citizen energies, a plethora of initiatives in the territories

Citizen energies, a plethora of initiatives in the regions, by Patrick Norynberg

Understanding, identifying and supporting social and territorial innovation - A guide to renewal