The life-crushing machine just went haywire with the coronavirus crisis. But the consequences that result from our unpredictability make it necessary to alert and mobilize on the urgency of other dangers that have not disappeared during this pause for health reasons of the weather: global warming, loss of biodiversity, globalized food system ... are endangering all humanity. Humanity is under attack from all sides by a market system whose main goal is short-term productive efficiency and financial remuneration; harassed by an imperative of over-consumption pushed to its paroxysm, with contempt for diversity. Yet diversity is the very essence of our system. ecolonomics and the coronavirus crisis is a cruel reminder of that. Will we learn from it?

For decades now, ecologists have been insisting on the essential nature of diversity in maintaining the equilibrium of living systems, whatever their level of organization: cells, organisms, individuals, species and ecosystems. cashs, the ecosystems. This diversity is what allows a system to adapt to change(s) by having intrinsically an alternative solution to the one in difficulty.

To suggest its importance with a caricatured but suggestive image: what would become of a city with only Italian restaurants if there was a shortage of spaghetti? Fortunately, there are restaurants with French, Lebanese, Chinese and other cuisines to take over... And what can an MacDo'. when he runs out of money to make his single-serve burger?

In such ecosystems, different species also perform different but intrinsically complementary functions: for example, the pollination function is performed by a well-defined category of species, which are also diverse: there is not only one genus of bees and nothing replaces pollinating insects in this function. But there is a diversity of bee species specific to each ecosystem.

As denounced for a long time now, industrialized agricultural practices have largely jeopardized this "biodiversity" of ecological systems due to the intensive use of weapons of mass destruction of plant protection or the extreme selection of a small number of species varieties based solely on their immediate food productivity, such as varieties of bees, cattle, trees, wheat, corn, soybean ... But this loss of diversity makes the food production system sensitive to the risk of disasters endangering these few "globalized" species: genetic disasters or ... epidemics: see those that are now affecting olive plantations, those that have caused the disappearance of elms and soon the ash treesto name a few. The pressure that our food consumption exerts on the animals and plants that we consume also intensifies the reduction in biodiversity; it remains to be seen whether the major efforts to conserve the genetic diversity of plants grown in gene banks will be enough to halt the trend or to restore this biodiversity at the end of a crisis situation.

What is fascinating is that these constraints and advantages of diversity are not limited to ecological systems alone: as the cartoon of the spaghetti shortage already mentioned, these same constraints and advantages apply to socio-economic systems, and we are experiencing the tragic demonstration of this: the health disaster that is affecting the human species is particularly amplified by the loss of diversity resulting from globalization, which standardizes certain functions. It is the diversity of their sources and resources that contributes equally fundamentally to the resilience of the functions on which the multitude of communities that make up the socio-economic systems of the human species depend. The geographical concentration of the production and distribution of essential resources for reasons of immediate economic efficiency can thus considerably reduce the availability of these resources in the right quantities, places and times: health, food, technological and human energy resources, to name but a few. 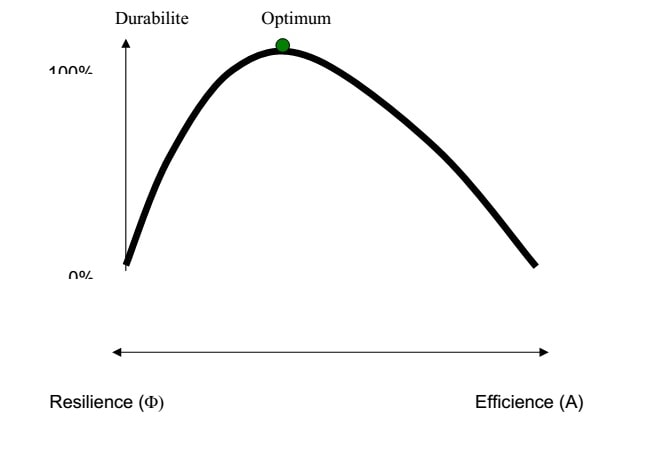 Paradoxically, from a macroeconomic point of view, "globalization" can also qualitatively increase diversity. Since antiquity, trade has made it possible to exchange products such as tea, potatoes, coffee or spices in Europe, porcelain, or even port in London and wool in Lisbon.

What is at issue, then, is the concentration of certain types of production in certain "specialized" regions that is destructive of biodiversity, such as the concentration of certain specific functions performed in an individual's organs. This concentration certainly increases the overall production efficiency of a "globalized individual system", but it is clear that a species, in its diverse multitude, has a better chance of surviving a crisis than a single individual, even if it is temporarily more "efficient".

One reason for this globalized specialization is in the market system, whose essential goal is short-term productive efficiency and above all its financial remuneration through globalized marketing that pushes over-consumption to the detriment of the diversity of self-sufficient local entities within the system (the short circuits), thus to the detriment of its capacity for resilience. This commercial form of "blood circulation" system and also, increasingly, of "nervous system" (via digital digitisation), which carries the bulk of "wealth", ensures a remuneration that has become predatory in order to store it in the form of locally paradoxical but unhygienic obesity for the organism as a whole, not to mention the risks of financial hypertensions facilitated by the virtual addictions represented by debts and other stock market instruments .

The icing on the cake is that this concentration of specialized industrial activities in certain regions of the world also leads to the concentration of associated (phytochemical) pollution, against which there is no "global kidney function".

The current conditions of economic globalization, which is in the process of being monopolized, thus bring into play the whole of the current planetary ecolonosystemic organism and above all an immense proportion of its subsets: what will remain of the majority of the literally asphyxiated "varieties" that are the human communities of the planet?

The blood circulation no longer performing its essential and vital functions, it is the organs and cells of an organism, millions of cells, or even entire organs, that disappear in their "functions" in the literal sense, to the point of endangering the existence of humanity as a whole ... But perhaps a certain "elite" sees positively such a demographic decline, which it needs less and less to ensure its profits ...

Beyond biodiversity, the essential issue is that the human species has long since stopped limiting itself to taking income (the "fruits") from the planet's capital, but is irreversibly ravaging it, as shown by the following examples indicators of its ecological footprint.

Will this crisis, whose severity and ultimate consequences are still difficult to assess, allow its physical and economic survivors to finally draw the relevant lessons? Or, on the contrary, will this crisis, like many others in the past, once again bring to the surface the simplistic psycho-reflexes of the mystical recourse to dogmatically simplistic ideologies and its "providential" prophets? What will be their more or less "digitally armed" power to authoritatively direct the ecolonoWobbly systems? In order to impose their visions and their even less economically sustainable systems, they will always need the diversity of functions provided by the various "organs" of society that they have taken over, but they will only be able to dispose of them through dictatorial practices (requisitions, compulsory labour, nationalisations, etc.), forms of slavery whose examples abound tragically in the previous century...

Covid-19, a disease of the anthropocene and biodiversity