A Dutch government scientist has proposed building two titanic dams between Scotland, Norway, France and England to completely close off the North Sea. These giant constructions would be able to protect around 25 million Europeans from the consequences of rising sea levels due to global warming.

Sjoerd Groeskamp, an oceanographer at the Royal Netherlands Institute for Marine Research, is working on a singularly ambitious idea. He claims, with proof and figures to back it up, that a 475 km dam between northern Scotland and western Norway and a 160 km dam between western France and southwest England was "a possible solution" to stem the inevitable flooding that will occur as a result of rising oceans.

In an article to be published this month in the American Journal of Meteorology, which The Guardian has reported on the first testsSjoerd Groeskamp and Joakim Kjellsson of the Geomar Centre for Ocean Research in Kiel, Germany, say the idea is affordable and technically feasible.

On the basis of existing projects, in particular the large-scale dams built in South Korea, scientists estimate the cost of building a so-called "North Sea enclosure" dam at between €250 and €500 billion. They argue that, spread over 20 years, the annual cost for the 14 countries that would be protected by this dam would amount to just over 0.1 % of each country's GDP.

If these calculations are correct, the project therefore appears to be economically viable in view of the material and human damage caused by the gradual rise in sea level and increasingly devastating flooding inland.

According to Groeskamp, this solution also appears to be technically viable. The depth of the North Sea between France and England rarely exceeds 100 metres, while between Scotland and Norway it averages 127 metres, with a peak at just over 320 metres off the coast of Norway. "We are currently able to build fixed platforms at depths in excess of 500 metres, so such a dam seems feasible," he said. 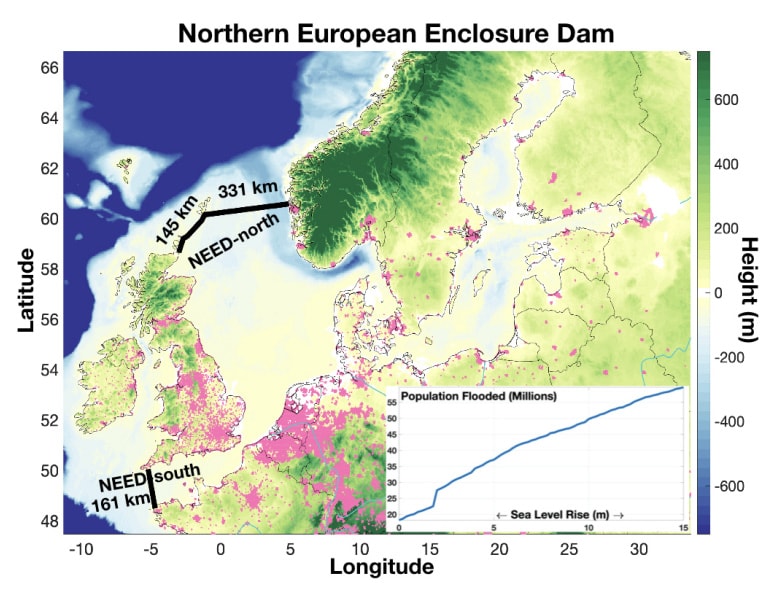 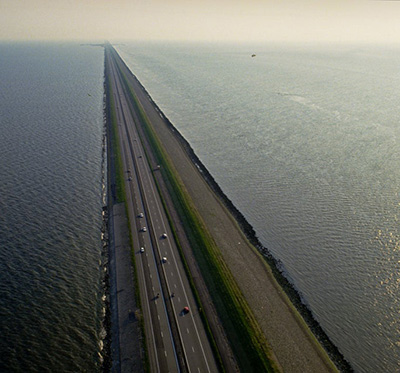 Building these two dams would have unimaginable consequences. The project would turn a large part of the North Sea into a vast, tideless freshwater lake, radically altering its ecosystem. On a smaller scale, this is what already happened in 1933 when the Dutch built the 32 km long Afsluitdijk dam. By closing off a large entrance to the North Sea, now the freshwater lake IJsselmeer, the construction made possible the largest land reclamation project in history. The Zuiderzee - of which the Afsluitdijk was a key element - and the Deltaworks, a vast series of dams, locks and storm barriers protecting the southwest of the Netherlands from the sea, are widely regarded as marvels of hydraulic engineering.

The idea is not that far-fetched and the international experts who have looked at this project have agreed that it appears to be technically viable. « I guess it depends on the time scale we think about."said Hannah Cloke, Professor of Hydrology at the University of Reading. « Sf you look back in the past, hundreds and hundreds of years, then we've made significant adaptations to our landscape, and the Netherlands is an example of that. We can, as humans, do amazing things ». The scientist adds: " I think it's really important that we keep thinking about these ideas, because the future looks very scary. "

The two authors of the project claim that a 10-metre sea level rise is expected in the long term, under the worst-case scenarios. The dam is therefore primarily a call to act now to combat climate change. If we do nothing, this extreme dam may be the only solution. The situation is indeed alarming: according to projections by climate experts, based on the current situation, we should reach 84 cm of sea level rise by the end of the century and more than 5 meters in 2300. Many European countries would then be wiped off geographical maps.

Will Australia's mega-fires have an impact on the global climate?

How are we going to live in the "urban furnaces"?