Floods, marine submersions, storms, land movements, coastal erosion, forest fires, heat waves, avalanches, earthquakes, ... the list continues to grow but above all to be repeated, leading to more and more risks for populations. And - as we have just learned - six out of ten French people are already concerned. The General Commission for Sustainable Development has just published a study revealing that, even if "mortality linked to major natural risks of climatic origin is modest in France", the number of people living in an at-risk environment is worsening.

Obviously, it all depends on where you live.
With its large coastlines and maritime territories, its 883 seaside towns, lagoons or salt ponds and 87 located on estuaries or deltas, its 20,000 kilometres of coastline and 620,000 kilometres of rivers for the hexagon and its territories (1), France is particularly overexposed to marine subversions and flooding.
22 % of the coastal zones are also subject to erosion and no French coastal region is spared by the phenomenon of coastline retreat. This means that 650 km of coastline is retreating, including 270 km at an average speed of 50 cm per year (17 % of artificial coastlines in mainland France and 12 % in the overseas regions and territories).
The population density on the coasts is currently 2.5 times higher than the national average, with an expected upward trend.

France is also the fourth most forested country in Europe with 16.9 million hectares of forest on its metropolitan territory. The size of its wooded areas makes it vulnerable to the risk of forest fires, particularly in the summer period. The regions of the South-West with the Aquitaine massif (New Aquitaine) and the South-East with its Mediterranean forests (Auvergne-Rhône-Alpes, Corsica, Occitania, Provence-Alpes-Côte d'Azur) are the regions most exposed to this risk. Nearly two out of ten communes (19 %) are exposed to the risk of fire, i.e. forest fires.

An extreme diversity of the country's climatic and geomorphological characteristics therefore underlies the exposure of its territories, not forgetting the clay soils that are conducive to the shrinkage and swelling of clays (South-West, Centre), tropical cyclones (West Indies), etc.

According to the Intergovernmental Panel on Climate Change (IPCC), "with climate change, some extreme weather events may become more frequent, widespread or intense. The IPCC also considers that the nature and severity of the impacts of these events are inter alia correlated with the vulnerability or sensitivity and adaptive capacity of populations.

Which communes are the most exposed?

The level of exposure of populations, defined as the higher the population density and the higher the number of climate risks identified per municipality, shows strong territorial disparities, according to Map 1 presented opposite.
On the basis of this criterion, it emerges that 3 % of the French municipalities are very highly exposed, 12,5 % highly exposed, 11,5 % moderately exposed, 20 % weakly exposed and 33 % very weakly exposed. A fifth of the communes are not currently exposed to climatic risks.

Why? The location of populations in high-stakes areas can be explained in particular by the historical settlement of cities along rivers, which were then used as transport routes and have since been reinforced. This is also true for coastal areas, faced with ever-increasing urbanisation, linked to tourist pressure. 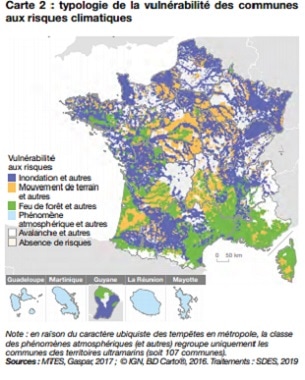 The 28,657 municipalities exposed to climate-related natural risks can be classified into six categories of territories (Map 2 opposite), which are homogeneous in terms of exposure to climate risks:

Vulnerability to flooding and ground movement
This category includes two thirds of the French population (44 million inhabitants) and almost half of the French communes (17527). All of them are exposed to the risk of flooding and 61 % of them are affected by land movements. These territories are confronted with flooding by river overflow, i.e. the approaches to the five major rivers (Garonne, Loire, Rhine, Rhone, Seine) and their tributaries, or marine submersion such as the coastlines of the Charente-Maritime in the Hauts-de-France.

Seven communes in French Guiana, crossed by large rivers to the east, west and south in the Amazonian Park, are also included in this set. Urban and peri-urban communes, as well as rural communes close to cities, are over-represented in this category. These territories have about 1.3 times more inhabitants and man-made areas than the national average. On the other hand, second homes are under-represented. On the whole, these territories concentrate on average more population, dwellings or facilities: educational or health facilities (1.4 times more), sports facilities or individual houses (1.2 times more). The latter are particularly vulnerable to clay shrinkage and swelling, especially in the Scarpe-Scheldt plains in the North and in the clay formations of the South-West.

All of these territories are also gaining inhabitants due to a positive natural balance, equivalent to 1.5 times the French average. The vitality enjoyed by these areas may be such as to accentuate their vulnerability to floods or to weaken their resilience in the face of an extreme event. These territories are characterised by a share of the population located in potentially flood-prone areas (by river overflows or marine submersion) 1.5 times higher than the national average. The same is true for buildings, especially those with no storey, even if the magnitude is smaller. This reveals the vulnerability of populations unable to take refuge at higher levels during an extreme flood.

Vulnerability to ground movement and wildfires forest
This class includes about 6 % of the population and 16 % of the French communes located in rural areas characterized by a negative natural and migratory balance. Mostly exposed to land movements, a quarter of them are also concerned by forest fires.
These territories are half as artificial as the average and also have 2.6 times less population. These municipalities concentrate two to four times less goods (housing, industry, sports, educational or health facilities) than the national average.

Vulnerability to forest fires, floods and ground movement
This group brings together 13 million inhabitants (18 % of the population) and 14 % of the French municipalities. The latter, which are vulnerable to both fire and flooding, are mainly located in the large forest massifs of the South-East (Languedoc coast from the Eastern Pyrenees to the Cévennes, Corsica, Vercors, Luberon, Dauphiné, the Esterel and Maures massifs) and in the north of French Guiana. In a more diffuse way, the forest massifs of the South-West (Pyrenean foothills, Landes, Périgord) and the North-West (Paimpont, Sologne) are also concerned.
Ground movements also affect nearly three-quarters of the communes in this group. With four times as many shrubby and/or herbaceous environments and twice as many forests as the French average, the over-representation of forest areas in these territories makes them de facto highly vulnerable to forest fires. Similarly, the higher than average level of buildings, population and employing establishments in flood-prone areas increases the vulnerability of these municipalities to flooding. The footprint of buildings without storeys in areas of extreme potential flooding by river overflow or marine submersion is respectively 1.7 times and 2.3 times higher than the French average.

River overflow flood areas also have nearly twice as many employing establishments and 1.6 times as many inhabitants. The population of these territories decreases by the natural balance and to a lesser extent by the migratory balance. On the other hand, these rural territories oriented towards a tourist economy have 2.7 times more second homes and 1.4 times more sports facilities than the national average. Facilities related to services, health or tourism are also more numerous. The over-representation of municipalities declared to be at technological risk exposes a large proportion of them to extreme weather events: dam failure (22 % of municipalities), industrial risk (7 %).

Vulnerability to avalanches
This class groups together 611 high mountain municipalities affected by avalanches, i.e. 2 % of the municipalities. More than 90 % of them are also exposed either to floods or ground movements and 75 % of them to forest fires. Three-quarters of these municipalities are located in rural areas and are very far from services (Alps, Pyrenees), with half the average number of agricultural jobs.

Focused on the tourist economy, there are 6.7 times more second homes and 2.7 times more tourist facilities than the metropolitan average. The over-representation of forest environments explains the predisposition of this class of municipalities to forest fires: shrubby and/or herbaceous environments (10 times), forests (3.3 times). 21 % of these communes are also exposed to the risk of "dam failure", compared to 13 % in France.

Hurricane Vulnerability
The overseas departments (excluding French Guiana) are affected by hurricanes (tropical cyclones) throughout their territory. In September 2017, winds of over 300 km/h from Hurricane Irma (category 5 on the Saffir-Simpson scale) caused 11 deaths, 450 injuries and heavy material damage in the West Indies.

Municipalities in this class are also exposed to land movement and flooding and, to a lesser extent, to forest fires. Although this group concerns less than 3 % of the population, the major centres of growth driven by the natural surplus predominate. These municipalities have on average seven times more artificial surfaces and ten times more inhabitants and houses than the national average.
Marine submersions threaten the coastal territories of this group. The total or floor-less building footprint and the population living in these potentially flood-prone areas are respectively 14, 17 and 20 times the French averages.

Of all these territories where populations are at risk, only 3.6 million inhabitants live in territories with low vulnerability, representing one fifth of French municipalities. Located in rural areas with a declining population due to a negative migratory balance, there are systematically fewer dwellings and facilities. These communes have almost four times fewer inhabitants on average and the number of houses and the surface area of man-made areas are 2.5 times smaller.

In conclusion, thestudy thus demonstrates that "the extent of the risks incurred in these six types of territories depends on the choices made in terms of development and planning, particularly at the local level, with regard to the vulnerability of these areas and the issues at stake [...]".
One need only recall the year 2004 when, for the first time, the Nobel Peace Prize was awarded to the Kenyan environmental activist Wangari Maathai. Awarding the prize, Ole Danbolt Mjoes, head of the Norwegian Nobel Committee from 2003 to 2008, said something that set the stage for a new approach to our relationship to the environment and our security: "Peace on earth depends on our ability to preserve our environment. » It was only the beginning of a growing awareness.

What are the solutions to the increasing number of economic and climate refugees?

Is not having children to save the planet such a good idea?