By dint of repeating that coal is a disastrous fossil fuel for the planet, world leaders seem to have finally understood. Coal has recorded a drop of 3 % in world electricity production. This figure is an average, with ups and downs depending on the country; the virtuous trend is driven by Europe, which posted a record drop of 19 % in the first half of 2019. Everything would therefore be fine if the British NGO Sandbag had only looked at the figures a little further than the tip of our nose. The reality is that Europe produces less coal-fired electricity but buys a lot more from countries just across the border. As if greenhouse gases stop at customs barriers!

Last year, coal experienced a historic decline to 3 % of global electricity generation. The European Union played a major role in this result: a drop of 19 % recorded in the first half of 2019, thanks in particular to Ireland (-79 %) and Germany (-22 %).

But this virtuous result is a decoy. EU countries would import more coal-fired electricity overall. Most of it would come from power stations in the Balkans, located just outside Europe's borders, reveals the British environmental NGO Sandbag. Its report shows that 21 TWh of electricity was imported from third countries, compared to only 3 TWh in 2017. These imports would have emitted around 26 million tonnes of CO2 in 2019, more than the annual emissions of Italy's coal fleet, the sixth largest in the EU.

European countries are reducing the share of coal in their electricity generation. This allows them to demonstrate cleanest behaviour to their increasingly green electorates. A virtuous conduct that does not come from a sudden burst of awareness of their environmental responsibility. These countries are giving up coal because it is expensive. Since the Kyoto Protocol came into force in 2005, the member countries of the European Union have been subject to the emissions trading scheme. In this market, the price of carbon is constantly rising: €20 per tonne in 2019. This additional cost was designed to encourage the development of renewable energies to the detriment of fossil fuels. In practice, however, this has led to a wave of coal-fired power plant construction just outside the EU's borders, mainly in the Balkans, in countries that tax little or no carbon emissions. 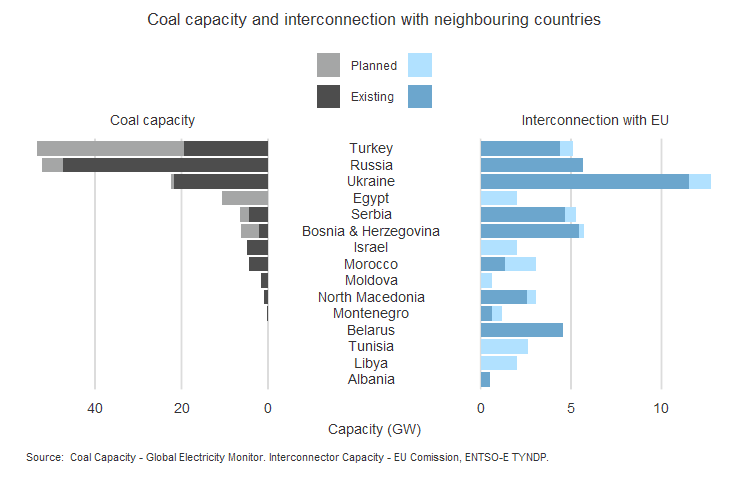 It is to these countries that Europe turns to supplement its energy supply. Dirty but low-cost electricity is sneaking into the European grids incognito. And at the rate at which some countries on the periphery of Europe are building coal-fired power plants, this supply is not about to stop. The NGO Sandbag estimates that 57 GW of coal energy could be injected into the European grid.

Only one measure could stop the development of this perverse practice: the introduction of a carbon tax at Europe's borders. This would make it possible to push less virtuous producer countries to adopt good environmental practices.

Some MEPs, such as Finland's Ville Niinistö, are in favour of introducing such a tax, which would push neighbouring countries to finally get on the road to renewable energy. Probably thinking of the gas of her big Russian neighbour, she says: "I'm not sure that we're going to be able to do that. In the EU we are clearly on the way to an electricity system based on renewable energies, and our neighbours should be too. If we introduce a border carbon tax on electricity, we would avoid exporting our emissions and bring our neighbours into the shift to renewables."

The President of the European Commission, Ursula von der Leyen, takes a very positive view of the introduction of such a measure. But the first sketches of the idea have reached the ears of Donald Trump, who, with all his bristling hair, made it clear that he was vehemently opposed to it. It must be said that the United States supplies nearly 17 % of the coal used in Europe.

Should there be resource quotas per citizen?

These French banks that finance the destruction of the world's forests