At a time when the associative sector is wondering about the means to be implemented to perpetuate its action, while public authorities are restructuring the levers of generosity, and faced with the principles of transparency demanded by citizens, the Observatory of Donation in Trust reveals, through a study carried out by Viavoice, that donation is not only a matter of generosity. In a context marked by a growing mistrust of both institutions and the private sphere, it makes it possible to envisage and understand the dynamics and motivations behind the generosity of the French.

As the philosopher points out Paul Ricoeurthe gift economy." allows one to tear oneself away from self-unknowledge and contempt for others, for the fragile promise of a gift that does not wait for a return. » (1)

READ IN UP' : Receiving, acknowledging and giving

As the journalist Nicole van der Elst explained in an paper in UP' in 2016The gift, when it is truly disinterested, generates an economy of its own when it is used in economic life for its function of redistributing wealth for the benefit of the most deprived. Effective against violence, social exchanges inspired by the ethics of giving are nowadays experiencing a significant growth. They encourage the emergence of skills such as mediation, which are essential for safeguarding the link between generations and communities in our democracies. This situation is prompting a growing number of companies to be more vigilant in assuming their social responsibilities in the city. Nevertheless, the relationship between giving and generosity depends on a significant and revealing factor of our time: trust. According to the study conducted by the organization Donate with confidence (2) with the support of the Viavoice Institute and the support of the Ministry of National Education.

Globally and significantly stable for more than ten years, the French have had confidence in associations and foundations calling for donations (55 %). They are perceived as being better able to take up certain social issues than public authorities; nearly one French person in two (47 %) considers that their action makes it possible to compensate for the shortcomings of public action. 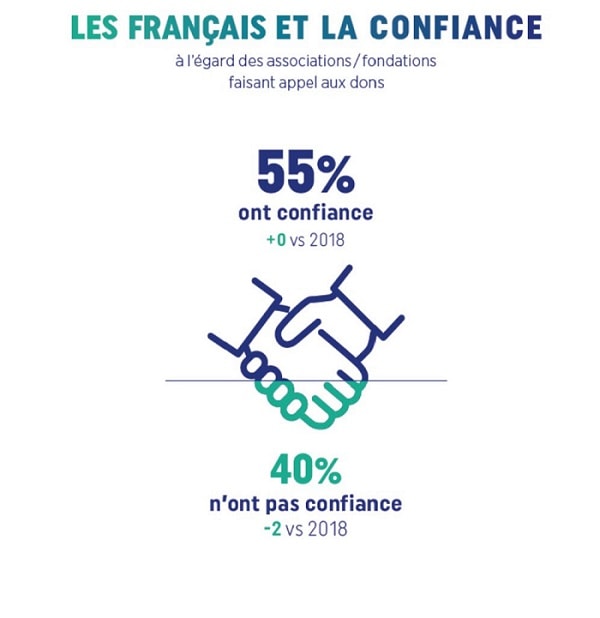 Lack of trust, a bigger barrier to giving than lack of money

The main reason why the French would not give to an association or foundation is the lack of confidence in the use of funds (62 %), even before not having sufficient resources (57 %). This highlights that giving is not only about generosity: trust is the key. And when they don't trust, it is above all the destination of the donations (for 33 % of those who don't trust) and the fear of scams and misappropriation (31 %) that the French have doubts. 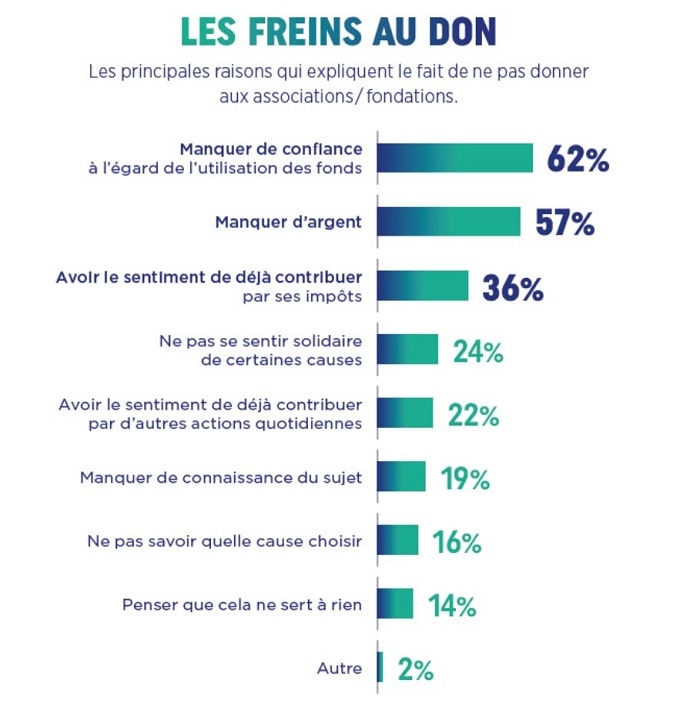 Confidence in the future, decisive for the donation

The donor is characterized by a particular worldview: a sense of confidence in the future and integration into society. Conversely, the non-donor shows more rather negative feelings about his or her future and society in general. Thus, giving does not appear to be simply a matter of generosity: it also reflects trust and investment in society.

Control as a vector of confidence

Trust is earned, and the control of associations and foundations calling for donations contributes greatly to this. Thus, nearly 8 out of 10 French people believe that an organization in charge of controlling the actions of these organizations would make it possible to limit abuses or scandals and to improve their practices and management. This has been the role of Donation en Confiance for the past 30 years, which controls nearly 100 associations and foundations based on principles of transparency, the search for efficiency, probity and disinterestedness, and respect for donors; a mission that would also encourage nearly two-thirds of French people to make more donations. 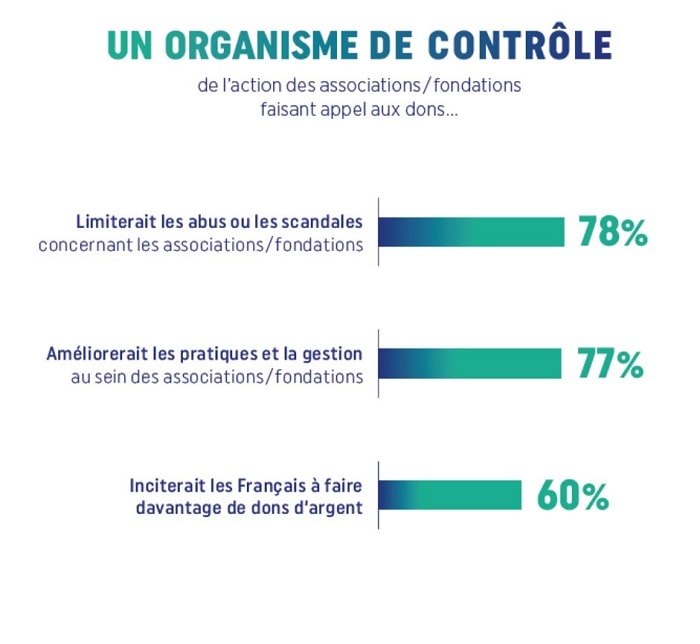 A tailor-made solicitude of mysterious origin, entailing neither debt nor obligation to whomever it meets, such as a presence in solitude or a fire in wandering... the experience of giving has echoes in all cultures and in all latitudes... (3).

This phenomenon inspires the philosopher Jacques Derrida a hypothesis: "The real gift would be the gift of someone who, without reason, gives without knowing what he is giving, to someone who would never owe him anything, since he would never know that he was given... only one is a gift that does not bear that name. (4)

Methodology of the study : The study was carried out from 27 August to 3 September online with a sample of 2,000 people representative of the French population over 18 years of age. Representativeness through the quota method applied to the following criteria: gender, age, occupation of the interviewee, region and category of urban area.

Pilgrims from the New World

For some years now, there has been a real craze for pilgrimages, and more