Good news: Edouard Philippe is paying for his tour! He has just announced this Friday, September 20, on the occasion of the congress of the Association of Rural Mayors, the will of the government to encourage the maintenance and opening of cafés in villages, within the framework of the " l'rural agenda "government. Objective: revitalize the territories! Because, despite the innovation, coffee has always been the first social network in the territories. So what happened to the 600,000 bistros that existed in France in 1960? There are only 40,000 today. And 26,000 of the 32,212 French communes no longer have cafés, even though these establishments are at the heart of the ecosystem and village life.

In April 2018, the Union des Métiers et des Industries de l'Hôtellerie (UMIH), on the occasion of the "Assises de la ruralité" in Rodez, presented a manifesto "Cafés, Hotels, Restaurants: the beating heart of our villages" with seven priorities to awaken rural areas. Manifesto which was addressed to the Government, Members of Parliament, Presidents of Departments and Presidents of Regions, and local elected representatives. Appeal heard?

It would seem so, since the Prime Minister proposes in particular to facilitate the establishment and maintenance of small businesses and "places of conviviality" in the countryside. Starting with small bistros, for which he wishes to authorise new IV licences, necessary for the opening of alcoholic beverage outlets, but also to relax the regulations attached to them, and to support a tax exemption that would benefit them as well as other types of rural businesses.

It has also thought about easing certain regulations, including those on security controls, their accessibility or location. The government is also proposing that rural communes with fewer than 3,500 inhabitants and fewer than ten businesses will be able to exempt them from local taxes, with the state compensating 33 % of the commune's loss of income.

Why do pubs disappear

Today, 26,000 towns and villages in France no longer have cafés, while cafés, hotels and restaurants are at the heart of the village ecosystem: they create jobs and social links, they liven up village life, they encourage the development of a cultural offer, they contribute to the tourist appeal of the countryside, etc...

Their role, essential to the economic and social development of the territories, is also widely recognised by the French, despite changes in lifestyle. According to a IFOP survey for UMIHThe contribution of cafés, hotels and restaurants to rural communities is recognized almost unanimously by the French: 90 % think that in a rural community, the presence of a café or restaurant contributes to economic life and social cohesion.
However, these shops do not always seem easy to find: 68% of the French say they have already had difficulty finding a hotel, 54% a restaurant and 43% a café. And the French are in favour of the presence of services that facilitate exchanges (wifi access, etc.), cultural approachThe main advantages of the site are the possibility to buy local products, or the possibility to find local products. The sale of tobacco products or scratch games appears to be a secondary service to be offered.
Of course, some will see this as the abandonment of public services by the State, further aggravating the rural crisis ...

The disappearance of cafés in our small villages is due to the urban exodus.... Everybody goes to work and live in the city or in peri-urban areas. As a result, more than 15,000 communes with less than 3,500 inhabitants no longer have any local shops, leading to the desertification of small rural areas. Added to this is the general decline in alcohol consumption, as bistros have to find new points of attraction to keep customers away from home: in 1960, more than half of all alcohol was sold in public houses, today they sell less than 10%.

Another aggravating factor in the disappearance of coffee shops is the transformation of road transport infrastructure, which also plays its role in diverting people away from the villages. Ah, it is true that the villages are calmer since they are no longer crossed by cars or trucks, but this has led to the closure of many small catering businesses whose customers have simply disappeared or are no longer numerous enough to survive.

"The café, the hotel, the restaurant, are the beating heart of a village. They are often the last business, rich in identity, the only place to meet and enjoy life. Their presence is a bulwark against desertification, against the departure of young people and working people. I am convinced that there is a future for our establishments in rural areas, that there is a future outside the big cities.

The new bistro has arrived...

But it may well be that the village bistro is much more than just a "pub"! There are already many cafés serving as bread depots, grocery stores, concert venues, or even simple places to relax. Additional opportunities to create encounters, exchanges without having to take your car, spending gas for the nearest hypermarket ...

The Statista data site assures that the main reasons people come for coffee in bars, hotels and restaurants in 2018 are conviviality (59 %) and relaxation (61 %).

This is the case of a small café full of charm run by Jean in an unusual place, an alternative convent in the heart of the Breton town of Calmez, in the Côtes d'Armor, created and directed by the artist-painter. Sylvain Bouder. Jean is from Lyon and opened his bistro in 2016. He is happy because the coffee is running rather well thanks to the at the gîtes du Couvent that drain a lot of traffic, people from all over the world who come here for a night or a few weeks of relaxation. 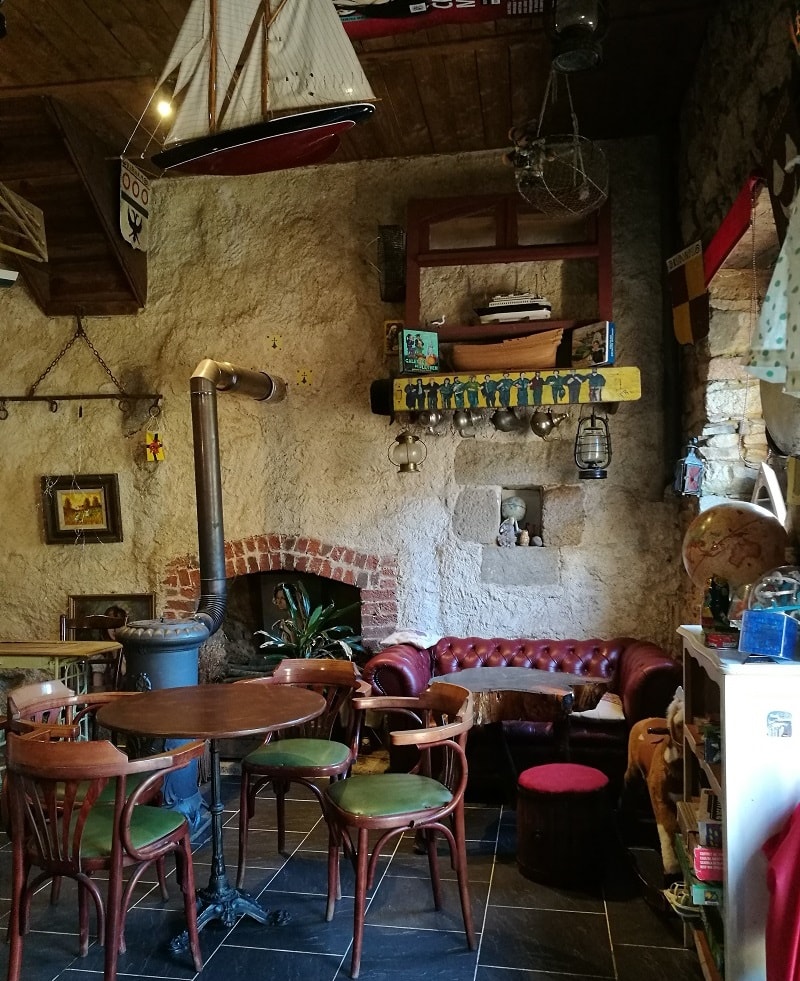 Thanks also to its offer of convenience groceries, local products, bread varieties, but above all its welcome and the atmosphere of the place. There is therefore a lot of people passing through, but also the regulars of the area who come to have their morning or afternoon coffee.
The café is open every day from 7:30 to 12:30 and from 15:30 to 19:30. (Le Café Le Coup d'Vent at the Convent - 02 96 44 71 67 -)

The government's initiative seems to take into account this phenomenon of abandonment of our country bistros, due to a habitat unsuited to contemporary lifestyles, and thus calls into question the preservation of an important cultural heritage. We must therefore propose a strategy for reclaiming our village cafés, designed to accompany the evolution of our village cafés over time. There is no miraculous solution, but a series of effective decisions to be implemented throughout the territory.

No pesticides! The mayor's sling

Let's light up the stars!

Small towns and big villages are the future