When utopia turns into dystopia... From October 25, 2019 to January 26, 2020, discover Amos' world, an original artistic installation that stages the destiny of a community of inhabitants of a large ensemble. Mixing sculptures and videos, this immersive work tells the story of the collapse of the ideologies of modern architecture and deploys a certain allegory of our time.

Trilogical work by the American-Belgian artist Cécile B. Evans, Amos' World...unveils a fiction in the form of a television series. It follows the architect, Amos, and the inhabitants of the large housing complex he designed. Forced to observe that the building is failing to live up to its promises, the tenants will reappropriate the situation and regain their capacity for action, thus upsetting the ambitions of the architect who imagined he had created an ideal structure. What happens then when the world built by Amos begins to collapse? Like an allegory, Amos' World questions the construction of our subjectivities and the progressive collapse of a capitalist thinking of the collective.

The story draws on the experience produced by the ideology of modern architecture and its failure, to deploy an allegory of our network-dominated age. Technological, railway, urban or human, for example, it brings together various entities in a relationship of interdependence, decentralized or hierarchical, horizontal or vertical. The aim of these structures was to produce private spaces ideally articulated with common spaces, proposing a perfect harmony and concordance between architecture, man and nature. Exploiting to the maximum the available resources made to house many people in the same place, mastering leisure spaces, designed and conceived upstream without taking into account the populations that were going to live there, they seemed perfect for the capitalist era.

However, these projects have almost always failed. The tenants were held responsible for these failures because they did not conform to the behaviour imagined by the architects.

Cecile B. Evans stages the power relations between individuals, the way they are activated and shaped by infrastructures. The story ofAmos' World evokes the hierarchies and control mechanisms that condition the interactions between individuals and regulate their relationship to space and objects.
Bringing together actors, actresses and characters animated using analog and digital techniques, the trilogy is visible to visitors from individual viewing booths, whose shape is reminiscent of the Amos building. Elements from the filming, reconfigured into sculptures, punctuate the exhibition spaces. 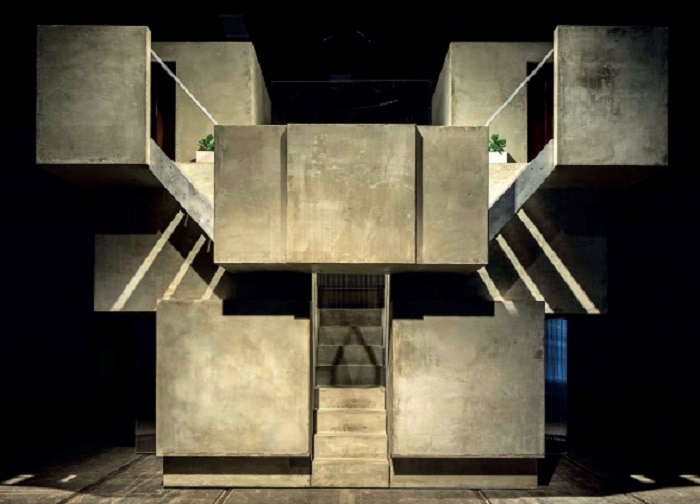 Here we are introduced to Amos, the architect. His character corresponds to the archetype of the tormented white man, whose arrogance excludes any capacity for uncertainty. He confuses his ambitions with reality and does not perceive its impact. Some of the building's tenants are also presented, as well as a character called the Weather (in the sense of weather) who tempers the architect's fantasies and moods. As the action unfolds, the building reveals itself to be out of step with the ideal he wanted to implement. The physical and emotional needs of the inhabitants come into conflict with the architect's planned behaviour for the users of the building. 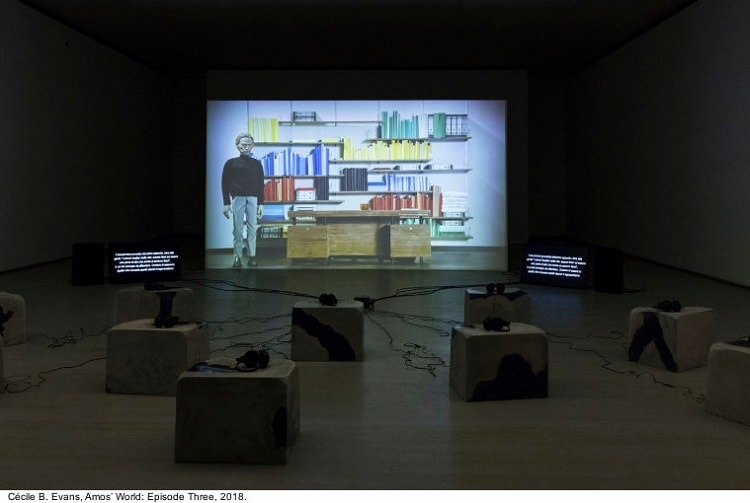 They bring the climax and the conclusion of this story. Amos' sense of superiority crumbles and the action shifts to the building's tenants who begin to reconcile their actions with their needs. As each character struggles with his or her own difficulties and conflicting desires, a cataclysmic event called the 'turning point' (The Turn) marks a new stage just before episode 3.

Episode 3 was filmed in the studio, in front of an audience. Reflecting the dismantled structure of the building and the more frequent contacts between the tenants, Episode 3 is projected in an open structure, where viewers are seated in the same space. 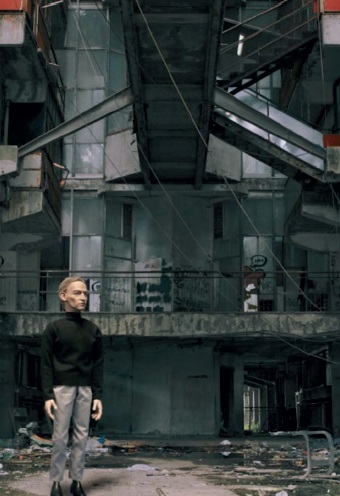 This project, at the crossroads of different disciplines, deploys an allegory of our existence within a constructed reality, in which the characters will gradually rise up against the physical, ideological and technological structures that aim to confine them.

Meeting with the artist on Sunday 26 January 2020 - 3pm : Interested in the rebellion of emotions, against all forms of oppression, whether ideological, technological or physical, Cecil B. Evans develops an artistic work questioning the power structures in place in our contemporary societies.

In a society with compartmentalized categories, the guest artists propose strategies to get out of fixed identities. Speculative narrative, ritual, dissociation, ... as many doors to widen the field of possibilities:

- Weekend of surprise encounters and activism : FRAC Weekend on Saturday, November 16, 2019 (free)
For the 4th consecutive year, the 23 Frac and Platform offer you a weekend to discover their actions. As in the previous edition, each Frac invites a personality from its region to appropriate a work from its collection and share it with the public. In Bure, in Meuse, many activists of all kinds have been fighting for 20 years against a project to bury radioactive waste. Odourless, colourless, but not without effects, they should be hidden 500m underground. This invitation during the Frac Weekend is an opportunity to make visible what is sought to be hidden and to probe the links between art and engagement.

– Projection-performance Collective Amnesia: in Memory of Logobi : Wednesday 20 November 2019 : 7 pm (free)
Christelle Oyiri aka Chrystallmess, DJ sound designer, critic
Why do some cultures go through history and others don't? Starting from this observation, Christelle Oyiri aka Chrystallmess writes her account of Afro-descendants. In this project at the crossroads of dJing, performance and 3D, she takes hold of Afro futurism and plunges us into the effervescence of the Logobi dance movement, originating from Abidjan (Ivory Coast). An invitation to come out of a one-sided version of the story, in a DIY version.

Giuseppe Penone at the EESC: the tree or the metaphor of the body