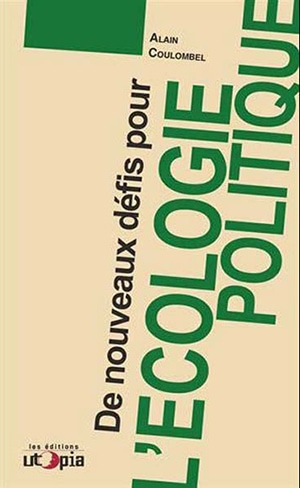 Jhile environmental concerns have never been more present in people's minds, never have there been so many statements on this subject by the media, politicians, scientists and citizens. From the Yellow Vest movements to climate marches, from the appeals of millions of signatories to school climate strikes, never has the need to link social justice and climate justice been more widely shared. Never before has the "urgency" to act been so compelling.
Yet and paradoxically, the partisan actors of political ecology seem to be little heard, or even marginalized. When political ecology was able, at the end of the 1960s, to open up new horizons with the criticism of growth, the future depletion of our energy resources, the dangers of climate change and pollution, it now faces new challenges.

We need, vitally need, that people think, that is, imagine, formulate their own questions and requirements, determine the unknowns of their own situation.
Gilles Deleuze "

How can we approach the new faces of hyper-capitalism, exhausting life in all its forms and disrupting the planet? How can we situate ourselves in relation to technology, Civic Tech, transhumanism and artificial intelligence, the Communs and the habitat, animal ethics, collapsology...?
That's what this book is about. From the augmented man to the disposable man, from corporate reform to the crisis of democracy, from the crisis of inhabitation to the praise of slowness or silence, this essay invites us to rethink political ecology at a time of all excesses and disturbances.

We are free - Let us not forget that our duty is to be free. Let's go slower, we'll arrive on time. Freedom is never to arrive on time - never, never! for our freedom exercises.
Alfred Jarry, Ubu in chains."

Alain Coulombel is an agrégé in economics and management and a member of the supervisory board of the Fondation de l'Ecologie Politique. After serving as a regional councillor, he is now a member of the management of EELV. He is the author of "L'entreprise et le temps", Edition L'Harmattan, 2011.
Share
Tweet
Share
WhatsApp
Email
Print
Login
0 Comments
Inline Feedbacks
View all comments
Previous article

Crisis of bees, crisis of humanity - For a caring society