Roubaix, alternative city, cosmopolitan city, bubbling, endearing, which reveals itself to whoever takes the trouble to listen and look at it. A city in its raw state, which has been able to take advantage of its past riches to create new ones in the spirit of the times, and of its abundant industrial heritage to reinvent itself as a tourist destination. Roubaix is also a city where the world of tomorrow is being invented, with a commitment for the past four years to the Zero Waste initiative, which mobilises all the players in the city. Roubaix is obviously, in the collective imagination, the city inseparable from the mythical Paris-Roubaix race. But it is also much more ... and the opportunity to combine art and tourism for the holidays of this summer 2020.

The summer of 2020 will be confined. Even if traffic remains limited to the borders, it could give rise to new discoveries in regions that, a priori, do not breathe country, maritime or mountain escape. So, this is undoubtedly an opportunity to escape from the marked out paths, the popular or expected destinations and to enjoy surprising and original itineraries.

To encourage the tourists of this special summer to reinvent the meaning of the word holiday - from the Latin " vacare (period during which a person ceases his usual activities), Roubaix Tourisme has designed a "no" - (period during which a person ceases his usual activities). ten routes of sightseeing walks, called " I Love Roubaix ». These walks are designed to discover the Roubaix area in a different way during the summer season.
The objective is to enable local tourism experiences in autonomy, outdoors, on foot or by bicycle, in the specific context of deconfinement. The themes and mileage are varied, from street-art to industrial heritage through Art Deco. The general public can access the CIRKWI site or the app, generate a pdf to print, or embark the route on their smartphone. All this is completely free of charge. 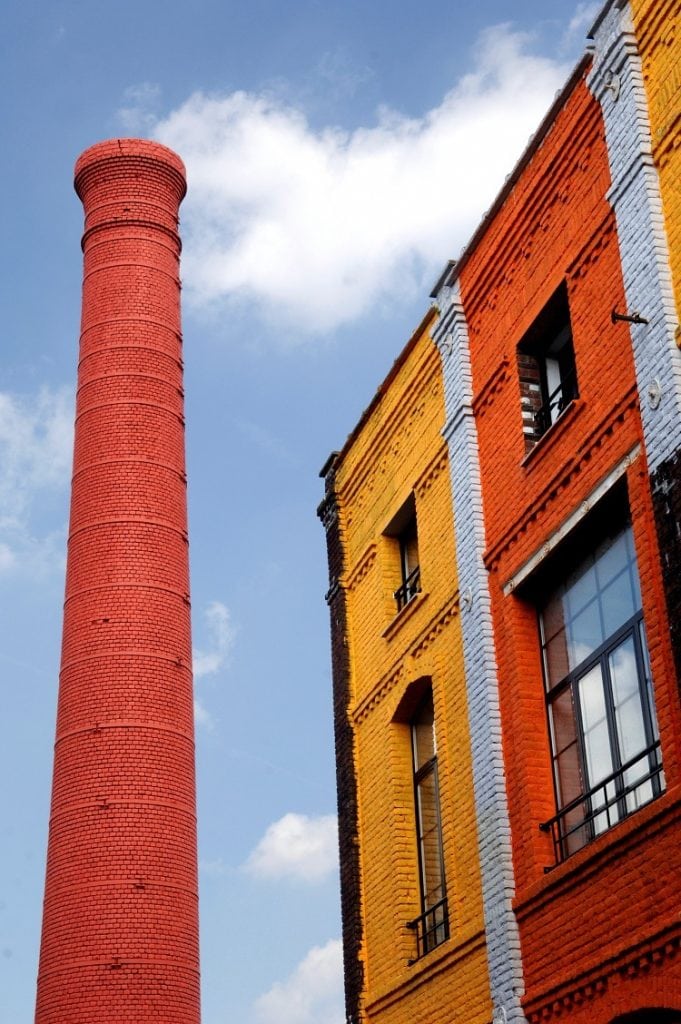 Three strolls to discover the industrial heritage, history and architecture

A journey back in time through Roubaix's industrial heritage

A discovery of the Roubaix urban landscape, shaped by the textile industry, with its factories, typical workers' housing, trading places, and how this rich heritage has enabled the city to reinvent itself, by installing a museum in a swimming pool, cultural places or shops in former factories.

Follow the brick thread and unfold the history of Roubaix

Traced on the tarmac, the blue thread Piscine takes you into the town centre, from the station to Mc Arthur Glen, for a stroll in the Roubaix of yesterday and today, between historic nuggets and pretty shops.

A walk with your nose up in the air, discovering the beautiful architecture of Roubaix.

An eclectic itinerary, from the city centre to the Barbieux district, between beautiful residences and sublime industrial buildings, from art deco to classicism revisited, through the 19th and 20th centuries. 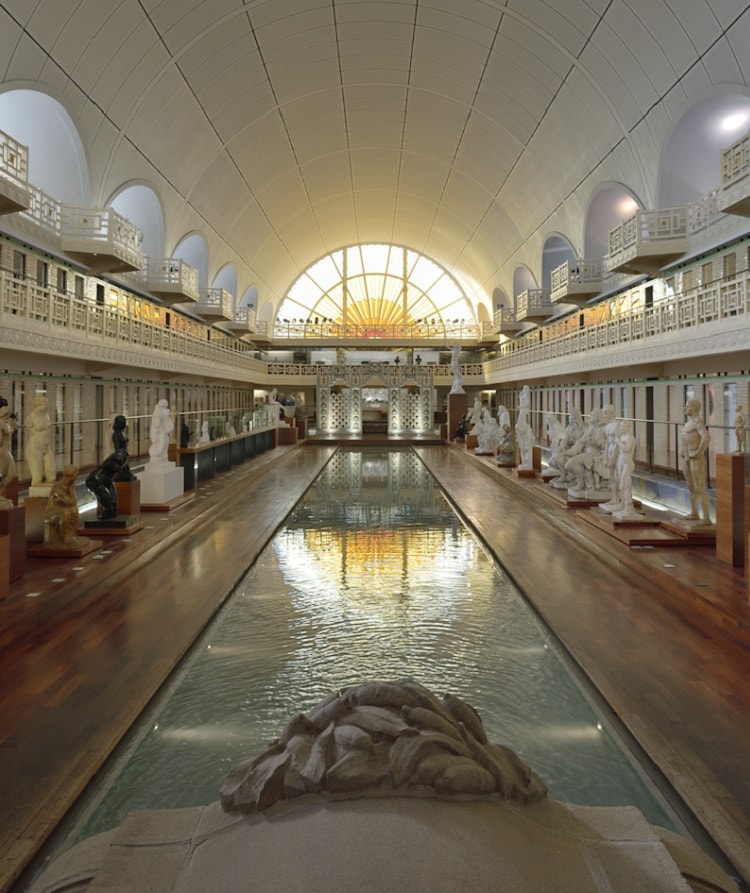 An immersion in Art Deco, between architecture and hygienism

Small lesson of applied Art Deco in the city center of Roubaix: a special architecture outing

It will have lasted only twenty years but it will have left its mark on people's minds... and buildings. Art Deco was concentrated between the two wars, and was then called "modern style". It was not until 1966 that the London Times newspaper invented the neologism Art Deco, short for decorative.

Decorative, it is indeed, and its aesthetic signature is a mixture of genres: on the one hand, the simplified geometric forms, to stand out from the curved lines of the Art Nouveau of previous years. And on the other hand, stylized motifs, flowers, fruits, sun rays, birds...

In terms of materials, don't forget that we are after the Great War: we need something economical, something functional. Reinforced concrete is becoming widespread, and inside, granito, concrete containing marble granules. Steel is used a lot, which makes it possible to enlarge the openings, ideal in full hygienism. In Roubaix, most of the building sites use the "Hennebique system", a kind of construction mechanic in iron and concrete, adaptable, invented by the Arras contractor François Hennebique. Brick is also popular: practical, solid, economical and decorative since it can be varied in shape and colour. The last touch but which makes all the style: Art Deco uses and abuses ironwork and stained glass revisited. 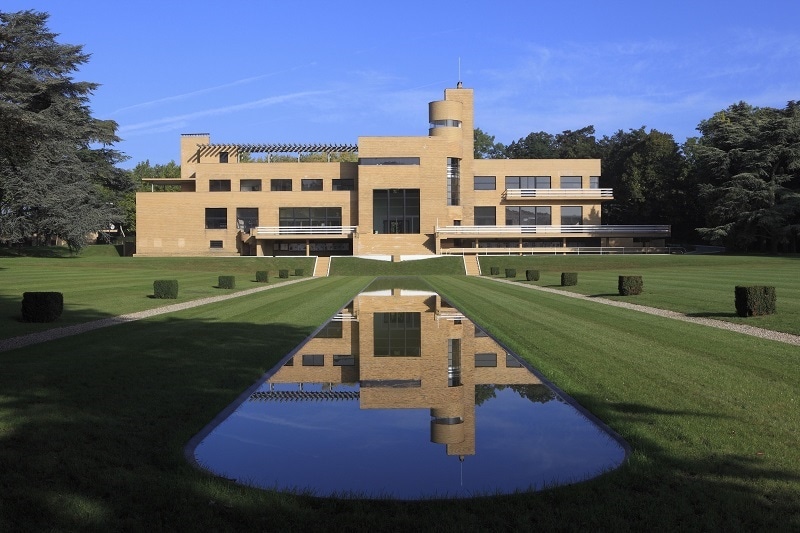 Air, water, Art Deco, a walk in the district of the new Roubaix

As its name suggests, Art Deco is an aesthetic trend. But as its name does not indicate, it also corresponds to a sanitary, social and political current: hygienism. Everywhere in France, and moreover in cities like Roubaix, where industrialisation is galloping, one feels the need to fight against tuberculosis and unhealthy housing. Buildings must allow the development of sports activities for all, and in particular for children, the free circulation of light, exposure to the sun and the open air, the implementation of a social housing policy... From HBM to the Sports Park, via the new school groups, hygiene is at work in the Art Deco buildings of the Nouveau Roubaix.

Once upon a time, there was a Cross, or the metamorphosis of a city at the turn of the 19th century.

The origins of the Cross predate the year one thousand and the Lords of the Cross are talked about in the 12th century. The walk will guide the walkers in the exploration of the city metamorphosed by the industrial revolution, between the 19th and 20th century, under the impulse of a man: Isaac Holden. And when industry unfolds, the whole city develops, from private homes to churches and the railway... Immediate boarding.

Beautiful houses and beautiful gardens: an urban hike from Roubaix to Croix

For this excursion full of beautiful discoveries, there will be a manor house at the top of a hill, an orphanage that looks like a Flemish palace, hundred-year-old trees, a miraculous legend, a 20th century castle... A little bit of beautiful stones, a lot of green, the secret of a successful day? 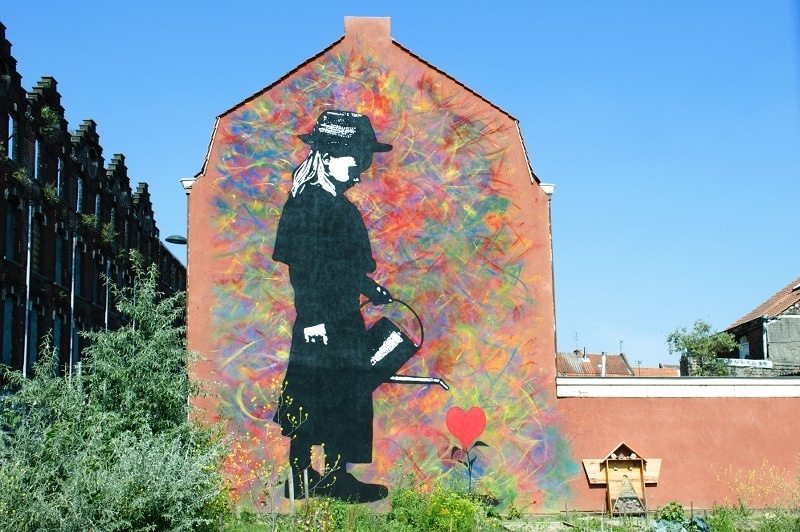 A world tour of Street-Art

Macadam Stroll to discover Roubaix's urban art, in the heart of the city centre

Exhibiting oneself in the streets: this is what Street Art or urban art works have in common. For the rest, throughout this stroll in the centre of Roubaix, diversity reigns. Monumental fresco or tag affixed on a street corner, graffiti, stencil or collage techniques, political, poetic or purely aesthetic statements, wall support, electricity meter, street furniture, parking lot or any other available support... the Roubaix urban scene is resolutely in the image of the city: creative and surprising.

A world tour of Street-Art in 1,800 metres, in the district of La Condition Publique in Roubaix.

A concentration of the world's best urban performers on one block is the unique experience that this tour provides. Indeed, the exhibition held in 2017 at the Condition Publique "Street Generation(s) 40 Years of Urban Art", also extended outside the walls with the realization of works by internationally renowned artists. And every year with #XU - an event dedicated to urban cultures - new frescoes are added to the open-air Street Art Museum that Roubaix has become. The local scene is not to be outdone, with creations all along the route. 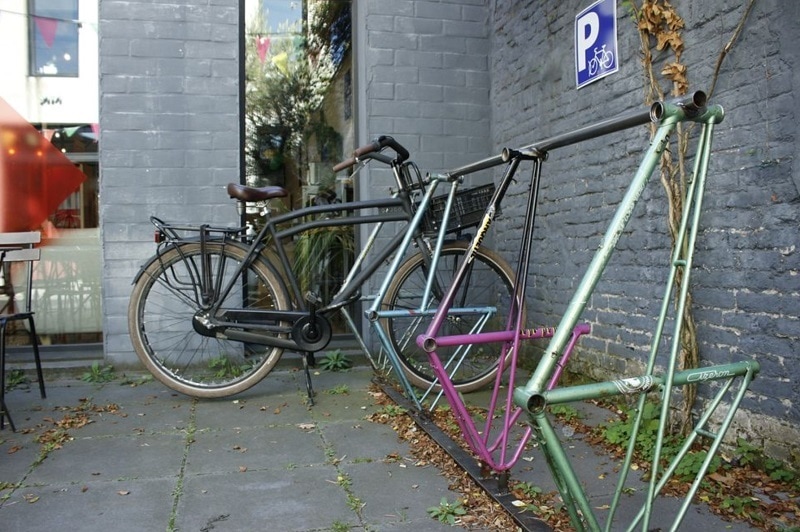 Roubaix between nature and city, a bike ride off the beaten track

It's well known, Roubaix loves cycling. This tour proposes to discover a little-known Roubaix by bike, via the EuroVéloRoute, which links London to Rome, along the Roubaix canal between wasteland and bucolic groves; via the new road bike, "365" of its little name, a timeless urban shortcut; and ending with a tour of the Paris Roubaix velodrome.

Artists to question the next world. Interview with Louis Guillaume