It is 2019 AD. All of France is occupied by pesticides... All of it? No! Because a village populated by die-hard Frenchmen is still resisting the invader. And life is not going to be easy for the garrisons of polluters from the entrenched camps of manufacturers of pesticides ...
It all began in the small Breton village of Langouët, in Ille-et-Vilaine, where a mayor had the courage to adopt orders on May 18 banning the application of synthetic pesticides near homes. At the initiative of Agir pour l'Environnement, 25 personalities from the associative world have just signed an article in Le Monde newspaper supporting mayors who have shown the same courage.

Daniel Cueff, the mayor of Langouët, a town of 602 inhabitants, had issued a decree last May prohibiting the use of plant protection products "at a distance of less than 150 metres from any cadastral parcel comprising a building for residential or professional use". But this anti-pesticide decree is being challenged in court by the prefecture of Ille-et-Vilaine. Langouët was already known for its ecological 100 % habitat with permaculture house-gardens. Objective: to allow the relocation of production for food autonomy and to allow the inhabitants to consume organic and healthy products. Without forgetting the school canteen 100% organic since 2004, solar panels producing 125% of the energy consumed .

A demonstration of support was immediately organised in Rennes on 22 August in front of the administrative court in support of the mayor. A banner in support of his action read: 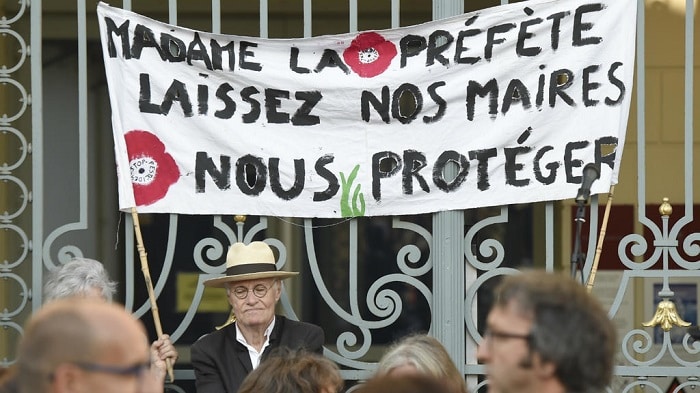 Environmental associations, but also several elected representatives, also came to support the mayor, AFP noted at the time. In addition to the mobilisation on the spot, several political personalities publicly affirmed their support for the mayor of Langouët. Among them were Ségolène Royal, EELV spokesman Julien Bayou and Matthieu Orphelin, a deputy close to Nicolas Hulot.

In an interview with Mariannethe Aedile says: "Ten years that the State has had to transcribe into French law the European directive which requires the protection of the inhabitants close to the treated fields! The use of pesticides has increased by 17 % instead of being reduced by 50 %. I had to protect my patients ".

This forumThis document, written by Agir pour l'Environnement is co-signed by the presidents of the UFC Que Choisir, France Nature Environnement, the League for the Protection of Birds, Friends of the Earth, Greenpeace and Nicolas Hulot himself!

For Jacques Caplat, Secretary General of Agir pour l'Environnement, who initiated this forum, "... I would like to express my deepest gratitude to all those who have contributed to this initiative. this is a very strong signal from the associative movement to the government; this debate must be accompanied by real work with farmers to help them change their practices ".

Faced with the growing mobilization of local elected officials, the Minister of Agriculture can no longer procrastinate by proposing a protection perimeter of 2 meters! Yet this is what Didier Guillaume, the Minister, has proposed as a solution supposed to respond to the concerns of local residents.

There is no question of establishing a distance of 150 metres, that would be madness. If there were to be 150-metre no-processing zones around all the houses, it would be the biggest artificialisation of land ever.... Farmers would no longer be able to provide our food self-sufficiency and we would be forced to buy food from elsewhere.
Didier Guillaume, Minister for Agriculture - Europe 1 - 4 September 2019

Other mayors are following the example of Languoët: In the Puy-de-Dôme, the mayor of Ceyrat signed on Monday, September 2, an order prohibiting the spreading of pesticides within 150 meters of homes, even if its municipality labeled "Healthy Lands" uses "zero pesticides". It is above all a support initiative, supported by about thirty other mayors from all over France, also winning the support of a part of the population increasingly concerned about its health and sensitive to environmental protection.

"The mayor and councillors [of the municipalities] are in an uncomfortable position between the state and the citizens. On the one hand, the French state has constantly withdrawn from its regalian role for several decades, it is a real resignation. It has transferred a large number of responsibilities to the communes, without giving them the means to assume them. This evolution is taking place in an immense fog of regulations that it is impossible to control: paperwork, paperwork and more paperwork ...". This is the observation revealed by a former mayor of a small town, who has become a publisher, in the afterword of a book that will be released on September 10. (1).

A blues that shows the disappointment, the overload of tasks and work, the lack of means, the violence, ... inciting them to throw in the towel. According to the latest CEVIPOF study (Sciences-Po) and the AMF (Association of Mayors of France and Presidents of Inter-municipalities), the mayors of the 35,357 French municipalities have for several months been expressing a feeling of weariness with regard to political and administrative responsibilities that they consider increasingly difficult to assume: 1 out of 2 mayors no longer wish to stand for re-election in 2020.

The phenomenon of "crisis" needs to be made more intelligible. Pablo Servigne, a member of the support committee of Sos Maires, points this out at the beginning of the book "Faced with the collapse, if I were Mayor? » (1) : " seeking to organise local authorities to avoid excessively harmful impacts, seeking to build a common resilience, or even to change the way we relate to life and to others, this is crucial, urgent and gives new meaning to our times"

In the coming weeks, the mobilisation must be stepped up in order to finally obtain real protection for local residents and to create pesticide-free zones now by commander and displaying a sticker "NO PESTICIDE! ".

Artificialization of soils: the perverse effects of all-out construction

Endocrine disruptors: children are the first to be affected