Faced with the coronavirus and the containment it causes, Gallimard publishes one or two " Crisis leaflets "signed by the great feathers of the House such as Erik Orsenna, Sylvain Tesson, Cynthia Fleury, Régis Debray or Danièle Sallenave, in order to reflect on the questions raised by the epidemic and to keep the link with the reader. 33 titles have been published to date. UP' has chosen to offer you each day an extract from a selected text and author.

But for this weekend, Gallimard offers us a single text! But what a text!

"The Plague" is the most widely read digital book since the beginning of the pandemic crisis. But the Gallimard catalogue hides another treasure: this " Exhortation to doctors of the plague« written by Albert Camus as early as 1941, long before the publication of his novel. A little-known text, poignantly topical, in which the writer addresses caregivers, placed at the forefront of humanity as a whole. 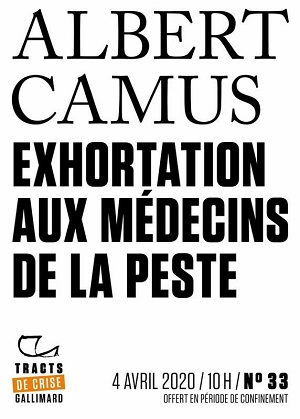 Published with another text in April 1947 in the Cahiers de La Pléiade, under the title "Les Archives de La Peste", Exhortation to doctors of the plague was probably written by Albert Camus in 1941, six years before the publication of The Plague of which it is one of the preliminary works. While the great novel by Albert Camus is read and reread all over the world today, in all languages, the collection "Tracts of Crisis", with the kind permission of the Succession Albert-Camus, invites you to discover this little-known but highly topical text in which the writer addresses his recommendations to doctors in their daily fight against the epidemic.

Good writers don't know if the plague is contagious. But they suspect it is. That is why, gentlemen, they feel that you should open the windows of the room where you visit the sick man. You just have to remember that the plague can be just as much in the streets and infect you in the same way, whether the windows are open or not.

The same authors also advise you to wear a spectacle mask and to place a cloth soaked in vinegar under your nose. Also carry a sachet with the essences recommended in the books, lemon balm, marjoram, mint, sage, rosemary, orange blossom, basil, thyme, thyme, thyme, lavender, laurel leaf, silt bark, and quince peel. It would be advisable that you be entirely dressed in oilcloth. However, this can be accommodating. But there is no accommodation with the conditions on which good and bad writers agree. The first is that you should only feel the pulse of the patient after dipping your fingers in vinegar. You can guess why. But perhaps it would be best to abstain on this point. For if the patient has the plague, this ceremony does not take it away. And if he is unharmed, he will not have sent for you. In times four of an epidemic, we treat his liver alone, to avoid any misunderstanding.

Above Ground, by Nancy Huston