Faced with the coronavirus and the containment it causes, Gallimard publishes one or two " Crisis leaflets "signed by the great feathers of the House such as Erik Orsenna, Sylvain Tesson, Cynthia Fleury, Régis Debray or Danièle Sallenave, in order to reflect on the questions raised by the epidemic and to keep the link with the reader. 37 titles have been published to date. UP' has chosen to offer you each day an extract from a selected text and author. 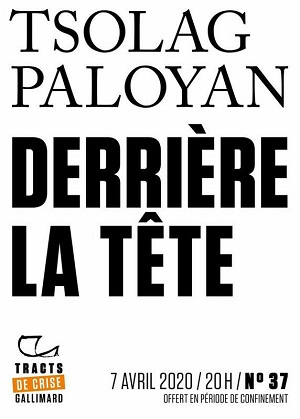 Are we really at war, as Emmanuel Macron says, or is there something excessive about this formula? Are we to believe Mrs. Sibeth Ndiaye when she maintains that masks are only useful for caregivers, or should we suspect that the executive branch of government has wandered on the subject at will? Can we agree with the spokesman for the Chinese Foreign Ministry when he says that the virus "has no nationality" in the face of the President of the United States who speaks of a Chinese virus?

The mind swings; for each time one and the other option seems to have its reasons. It is true that the martial vocabulary of the Head of State may have seemed out of proportion to the domestic retreat suggested to a large part of the French. The same scepticism lurks when masks, supposedly useless for the all-powerful, remain indispensable for some and have been fully part of the containment of the pandemic in other countries. As for the virus, while its first geographical focus may not confer Chinese nationality, it should nonetheless be allowed to note its origin.

How, then, can we explain such spurious presentations? What do politicians have in mind when formulating such statements? Or rather: what are they up to?to use the expression of a certain Pascal? The author of the Thoughts Indeed, it makes an enlightening distinction between a questioning of truth and a questioning, which takes precedence over the social good. The notion of truth is in a way broken down through the distinction between the place and point of truth: in other words, between the relevance of a belief and the underlying reason for that relevance, between which one believes and how in what respect it's worthy of credit.

It would therefore be necessary to go back from utterances to enunciation in order to grasp the appropriateness of these elements of language: it is certainly exaggerated to declare war, false to say the useless masks, incorrect to deny any origin to the virus, but those who fabricate in this way may be right, as Pascal would say, in hindsightwhich point minus what is that what he's doing to us You have to.

In these times of confinement, scarcity and possible unrest, strict compliance, mask saving and national cohesion are required. Faced with such priorities, it is less a question of weighing one's words than of imposing one's views on the seriousness of the situation and the civic-mindedness it requires.

This chance given to the individual to rise to the level of an enlightened and responsible citizen is precisely the (Easter?) wager that a not entirely disenchanted democracy necessarily implies.
Tsolag Paloyan

Above Ground, by Nancy Huston

A time for daring, by Alessandro Baricco