Finally some good news on the climate front. And some very bad news for America's big oil companies and their chief supporter, Donald Trump. Three highly controversial oil and gas pipeline projects have just been halted for environmental reasons. The environmentalists are delighted, as are the Sioux tribes whose sacred land was going to be ravaged by the greed of fossil man.

The weekend of July 4th was a bad time for the oil companies and their investors. And a slap in the face for the White House host. Three flagship projects for their business fell one after the other. A house of cards collapses and a new climate story unfolds.

It's like an airplane, it flies in a squadron...

On Sunday, July 5, in the middle of the U.S. National Holiday weekend, the Atlantic Coast Pipeline construction project is cancelled. The 500-kilometre pipeline was designed to transport fractured shale gas from West Virginia through the state of Virginia to North Carolina. Only a few weeks earlier, the US Supreme Court had given a ruling in favour of this construction.

The next day, Monday, a Federal Court ordered that the Dakota Access Pipeline be shut down by August 5. The court found that the pipeline, which was built in 2017 and runs through the Standing Rock Indian Reserve, continues to accumulate technical problems and oil spills in the wilderness. The court ruled that the project did not meet the safety requirements of the Environmental Policy Act. The Sioux danced to the announcement of the decision.

Never two without three, on Monday the Supreme Court ruled that the Keystone XL pipeline, long a symbol of conflict between climate activists and the fossil fuel industry, must also stop construction pending a study of its environmental impact. This halted project is a slap in the face for Donald Trump who, in his first week in the White House, had signed the authorization decrees with great pomp and circumstance.

This 24-hour setback comes at a time when weak oil demand, rising debt and growing concerns about climate change are forcing gas companies to shut down and oil giants to significantly reduce the value of their assets. But more importantly, analysts note that these decisions indicate that the legal backlash and mounting pressure from environmental organizations are finally working to defeat fossil fuel infrastructure.

Pipeline projects that once seemed inevitable, especially with the unequivocal support of the Trump Administration, now look like increasingly risky bets, as the US President collapses in the polls and opinion surveys show a growing demand for aggressive federal action on climate change.

Over the past three years, all the signs from the federal government have shown that the pipeline projects are moving ahead. In his first week in the White House, President Trump signed executive orders to accelerate construction of Dakota Access and Keystone XL, a pipeline long proposed by Canada. Since then, the Trump administration has relaxed rules on methane emissions from oil and gas infrastructure, rejected regulations requiring federal agencies to take climate change projections into account when authorizing projects, and proposed to severely limit reviews by NEPA, the federal environmental protection agency.

These efforts have accelerated in recent months. As the United States became the epicentre of the coronavirus pandemic in March, the administration took the opportunity to end environmental enforcement. In June, the Environmental Protection Agency finalized a rule change limiting state authority to oversee permits for federally approved pipelines under the Clean Water Act. The new restriction follows a mid-May decision by New York State to reject the Williams Pipeline, a proposed pipeline that would have transported fractured gas from Pennsylvania to homes in parts of New York and Long Island.

The recent series of refusals experienced by the fossil fuel industry illustrates a change in trend that is underway. In the Williams Pipeline case, climate activists stood up to state regulators, warning that the construction of new gas infrastructure exceeded limits that scientists consider safe, or risked charging New Yorkers reckless energy costs. As a result, the regulators conducted a thorough analysis that concluded that the pipeline was not necessary to meet regional demand. Instead, the regulators found that renewable energy and work on energy efficiency could make a real difference.

" Every time you make an environmental impact statement, you weigh the potential negative impact against the potential benefit of the project, and people have become much better at identifying what the potential negative impacts might be, " said Suzanne Mattei, an energy policy analyst at the Institute for Energy Economics and Financial Analysis. " Public input has become much more sophisticated over the past decade, and the purported benefit is much more questionable now ".

Democratic presidential candidate Joe Biden made no mistake and vowed to kill Keystone XL. He supports the promotion of low-carbon energy sources, even if it is at the expense of jobs in the oil and gas sector.

The Dakota Access pipeline cost $8 billion, but that did not prevent a series of technical problems and delays. Serious ruptures and leaks were found at least five times in the first six months of operation alone. In Monday's decision, the judge found that the Army Corps of Engineers had not properly considered the risk that such spills posed to vital drinking water reservoirs.

In the case of the Atlantic Coast Pipeline, Dominion Energy and Duke Energy Corporation said that delays and anticipated challenges to the project, which was first proposed in 2014, have upset construction plans, even after the Supreme Court ruled last month that the pipeline could pass under the Appalachian Trail. " This announcement reflects the growing legal uncertainty surrounding the development of large-scale energy and industrial infrastructure in the United States, " Dominion CEO Thomas Farrel and Duke CEO Lynn Good said in a joint statement.

Trump government energy secretary Dan Brouillette accused " the obstructionist and well-funded environmental lobby " of killing the project. But David Livingston, a senior energy analyst with the Eurasia Group, said the Huff Post that the urgent need to reduce greenhouse gas emissions has united previously disparate groups against projects that run counter to calls by scientists to begin dramatically reducing the use of fossil fuels. " The fact that climate change isn't just a 2020 phenomenon, and that it's going to be a persistent and tangible factor for energy companies, changes their calculations when they look at and weigh the risks [and] benefits of this kind of project, "he says.

Despite their successes, environmental advocates must not let their guard down. Indeed, these decisions may not slow down all pipeline projects. The Mountain Valley Pipeline, a proposed pipeline to transport gas from West Virginia fracture fields to gas companies in Virginia, is largely complete and is expected to move forward despite delays and challenges from environmentalists.

The consortium of companies behind the PennEast Pipeline, a proposed project to pump gas from Pennsylvania to New Jersey, proposed alternative routes in January to begin construction despite the state's refusal to issue permits. In Texas, meanwhile, construction crews are advancing on the Permian Highway Pipeline, despite the COVID-19 crisis that has completely disrupted the state. However, even in this state long considered a haven for the oil and gas industry, legal battles are piling up. In June, local landowners and conservation groups sued the company behind the pipeline for allegedly spilling drilling fluid that contaminated groundwater.

Clearly, it is going to be increasingly difficult to build new infrastructure for fossil fuels. This is a real blow to the American oil and gas industry. These fossil fuel giants need a sufficiently gargantuan pipeline network that stretches for millions of kilometers. The country's ability to develop this infrastructure is being tested as never before. " I expect this to be a turning point for new investment, " Katie Bays, co-founder of the consulting firm Sandhill Strategy, said Bloomberg. " There is a real investor fatigue around this legal and regulatory headwind of energy projects. ". Have oil companies become pestiferous in the eyes of investors?

Oil producers who have significant interests in the Dakota shale field saw their shares fall Monday morning following the shutdown order from Dakota Access. And the lack of new pipelines in the Northeastern U.S. could hamper Appalachian producers and accelerate the pace of the transition to renewable energy. 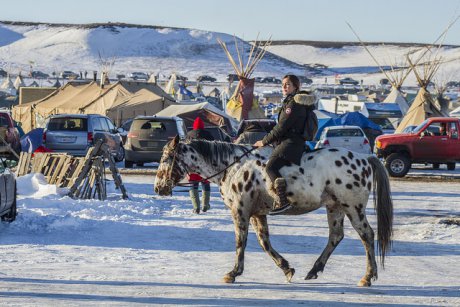 On Monday, the Standing Rock Indian Tribe reservation was in celebration. Thanks to years of resistance, the land of their ancestors will not be crossed by oil installations. " Have you ever had a dream, a dream come true? This is what we're living!" exulted LaDonna Brave Bull, a Sioux Indian of the tribe, founder of the Sacred Stone Camp, where resistance in 2016 led tens of thousands of people to oppose the construction of the pipeline on sacred land.

Mercosur, the world's largest trade agreement suspended in the Amazon