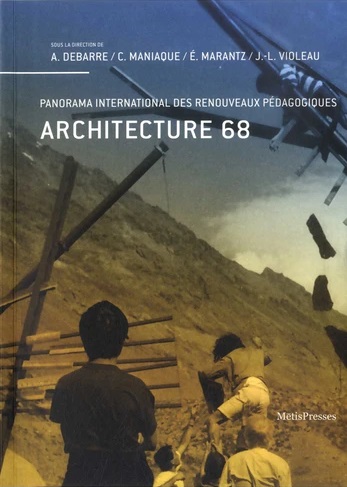 Many questions about architecture and how to teach it agitated the discipline during the 1960s and 1970s. From Japan to the United States, passing through the countries of Europe, South America and the Middle East, the contestation of architecture students was expressed almost simultaneously on several continents, testifying to the fact that beyond the breaking point that was the Paris May 68, a whole generation aspired to approach and practice architecture differently. "Mai 68 is a high point for the teaching of architecture in France. »

This collective work, which brings together the contributions of twenty-three of the most eminent specialists on the subject, offers for the first time an international panorama of the history of architectural education during the decades 1960-1970, a period of formidable inventiveness that will bring about lasting changes in the discipline and its pedagogies. As architecture opened up to the human sciences as well as to mathematical and computer experimentation, constructive alternatives emerged around ecology, the environment and the place of the user, all of which are at the heart of today's concerns.

"In France, the May '68 of architecture put down much more than the Beaux-Arts training system forged in the 17th century, to raise the question of the meaning of architecture and the social role of the architect. ...] This book invites us to turn our gaze away from France to consider what is happening elsewhere, in Europe and beyond (Near East, Far East, North America, South America). This confrontation takes on its full meaning if we consider, as Stanislaus von Moos invites us to do, that a fine reading of pedagogies opens a door to History and its multiple declinations: history of architecture, of creation, cultural, social or ideas history. Because it mobilizes several scales of analysis and weaves links between different cultural areas, this book allows us to grasp a phenomenon - the rupture and renewal of architectural pedagogy - in its entirety and, at the same time, to identify the intellectual, political or methodological frictions and interactions that have nourished it and, finally, to specify particular aspects of it, hitherto unknown or even misunderstood. »

"Questioning on an international scale the flow of ideas and practices in architectural education during the 1960s and 1970s provides an opportunity to reflect on some of the central themes that animated the debates of May 68. Contributions from different countries shed light on what distinguishes the Paris events from the broader critique of architectural education at a time when the old certainties of the Modern Movement are increasingly being challenged. These questions recur regularly in the essays of this book and often remain without clear-cut answers. »

Post-oil cities and territories, the landscape at the heart of transition