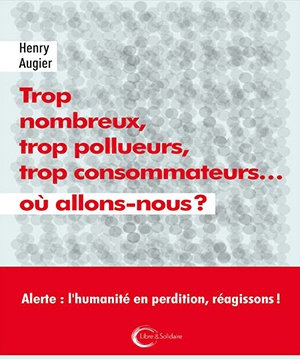 Too many people, too many polluters, too many consumers ... where are we going?, by Henry Augier

Ahe degradation of living conditions on Earth and the depletion of resources is so serious for the future of mankind that a more effective solution than that of over-boosting the economy must be envisaged without delay.
It is essential to find substitutes for resources, to force the application of sustainable development and to decrease.
This is not an easy process; it involves birth control, putting our technology at the service of our common interests, cleaning up our finances and condemning their abuses, as well as overturning our methods of governance.
Ceretes, this path is disturbing, even revolutionary; it comes up against many taboos, against beliefs, especially religious ones, against industrial, financial and political powers, against habits, against the caqpitalist world based solely on profits, and perhaps even against the nature of man. Yet it is the only possible way to avoid the collapse of our civilization. This is everyone's responsibility, in our personal lives as well as in our social responsibilities.
There is an emergency, but is our society taking the measure of it?
Doctor of State, honorary lecturer, honorary professor at the National School of Public Works, Henry Augier was head of a laboratory specialising in the study of nuisances and an international expert consultant on pollution and nature protection problems. He wrote many popular science books on the major dangers threatening us.
President of the Union calanques littoral, Henry Augier has always been at the forefront of the fight to save the calanques which led to the creation of the national park.
Share
Tweet
Share
WhatsApp
Email
Print
0 Shares
Login
0 Comments
Inline Feedbacks
View all comments
Previous article

The new resistance to technological violence