Faced with the coronavirus and the containment it causes, Gallimard publishes one or two " Crisis leaflets "signed by the great feathers of the House such as Erik Orsenna, Sylvain Tesson, Cynthia Fleury, Régis Debray or Danièle Sallenave, in order to reflect on the questions raised by the epidemic and to keep the link with the reader. 46 titles have been published to date. UP' has chosen to offer you each day an extract from a selected text and author. 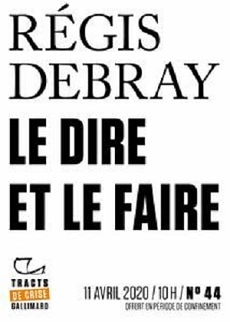 A doctor friend told me of the rising anxiety of his patients, especially the older ones, and said: "The inflation of communication may be an improvement, but it disturbs the certainties. "It is impossible to sum up better the disarray caused by this whirlwind of more or less authorized talk that makes you lose your head and your sense of things. This is the disadvantage of digital technology, and undoubtedly an advance in democracy, that everyone can give their opinion on everything, and preferably on what they don't know. Speech proliferates at the same time as the virus. It only affects the mind, which is much less serious. With a downside: the insidious rise of a certain nihilism, of which I am not sure, like my friend Finkielkraut, that it will be defeated. Everything can be said, and its opposite, without anything differentiating the founded from the unfounded. So everything is equal and nothing is equal. Who to believe? Who to trust? Where is the word of authority?

Not really with the political authorities. Let's not shoot the pianist, you have to improvise when faced with the unpredictable. But general crises are shameless: they undress kings and X-ray societies, showing us the spirit. Or a growing gap between saying and doing, a source of mistrust and suspicion. We are at war, we are told, but we are looking for the general-in-chief, the one who says a lot in very few words. Veni vidi vici. Without going back to Caesar, let us remember the General, who in a few sentences, less than three minutes, pulverizes a coup d'état in Algeria, and later, the chaotic psychodrama of a long month of May. One sentence, one act. Not one word too many, and every word in its place. Like the Queen of England, four minutes. Imperatoria brevitas. Authority and brevity are synonymous. A historian will tomorrow compare the dilution of public power, over half a century, and the dilution of official speeches. The less it can, the more it causes.

Asked before he died about what he considered "the characteristic of our time," Malraux replied curtly: "The absence of decision. "Hence the military half-measure and the parliamentary compromise: half a soldier in half a tank and one go and vote and stay at home. We know how the State in France, when it chose to commit suicide in order, he said, to modernize itself, invented all sorts of defeat organs with more or less pompous titles - Committees, High Councils, Observatories, 4 Forums, Conventions, etc. - and how it was able to make the most of them. - and ten other "independent administrative authorities". These tireless providers of reports for nothing have for the most part the usefulness of the extra on stage, when the actor is no longer there. The old nation-state, lacking in will and substance, has seen fit to add to the panoply of its abdications this machine for not making decisions that is called - an oxymoron? - the European Union. Chatterbox and cash drawer. The double-bottomed Brussels suitcase commits to leaving history through the small door, not to entering it through the big one. Yet there have been plenty of opportunities to try. This one could have, but will not be one of them.

The ostentatious presence of consultants and experts on the plateaus, next to our rulers, has been noticed. They are escorted by one, or even two Scientific Councils, created for the occasion, on whose behalf they speak. It's not us, it's Professor. Some have seen this as an infringement of the prerogatives of the Executive. I am not so sure about that. The Executive never appears alone on the scene. It has behind it, or rather above it, a dotted transcendence. It has changed in nature since St. Paul who said, as a good connoisseur of authority: " Omnis potestas a Deo ». All power comes from a great Other. Each epoch its own.

Letter to Lucie from Marion Muller-Colard