Faced with the coronavirus and the containment it causes, Gallimard publishes one or two " Crisis leaflets "signed by the great feathers of the House such as Erik Orsenna, Sylvain Tesson, Cynthia Fleury, Régis Debray or Danièle Sallenave, in order to reflect on the questions raised by the epidemic and to keep the link with the reader. 46 titles have been published to date. UP' has chosen to offer you each day an excerpt from a selected text and author.. 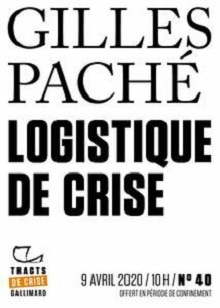 It is an understatement to say that management sciences do not have a good press in these difficult times of health crisis. After all, haven't they stopped celebrating globalization and financialization, for which we are now paying a high price? A flash of light in a very dark sky, we are nevertheless (re)discovering, with the Covid-19 pandemic, that logistics can be at the service of society, and not only at the service of a globalisation without faith or law. An iconoclastic detour to defend a humanist vision of the management of organizations, far from the original sin of managerialism.

When tomorrow's historians look back to the year 2020 and decipher the Covid-19 health crisis, they will no doubt evoke a planet that shook. Shaken by the spread of a highly contagious coronavirus that led several billion people to be confined, but also shaken by a world economy threatened with sudden collapse, and saved in particular by an unexpected - and massive - return of the welfare state. But it is undoubtedly the questioning of a model of globalisation, based on the fragmentation of value chains of the same product between tens of countries, thousands of kilometres apart, that will be called into question. How was it possible to arrive at strategic choices leading to the manufacture and then distribution of a smartphone involving suppliers of screens, microprocessors and cameras from hundreds of suppliers around the world? And probably more serious: how was it possible to accept the development with impunity of an absolute dependence of European pharmaceutical laboratories on active ingredients developed in China and India?

Let us recall for a moment the very first interventions of the French government on the Covid-19 pandemic, at the end of February 2020, by Bruno Le Maire, Minister of Economy and Finance. While the country, even before its confinement, was beginning to feel the effects of an announced economic and social crisis, the Minister devoted these famous "global value chains" to the geminies, making himself the champion of industrial relocations. As if the wave of globalization had to be stemmed at all costs, with an ultimately salutary health crisis to make us aware of its excesses. This is a strange reversal of the liberal political discourse conveyed by President Emmanuel Macron who, until recently, praised the fragmentation of global value chains, the logic of which Pierre Veltz traces remarkably well in his book The Hyperindustrial Society (2017).

If this singular moment in history is one of questioning our ways of (re)thinking about the structuring of productive systems, it also reveals how logistics has gone from being a logistics approach to being a process in just a few weeks. predatory to a status of approach life-saving. In fact, during the Covid-19 pandemic, many citizens simply discovered the centrality of logistics, which until then had been confined to a vague knowledge of some of its manifestations: lorries clogging roads and highways, but also polluting our cities; warehouses on the outskirts of conurbations disfiguring the landscape; and poorly paid warehousemen subjected to working conditions of little questionable harshness. Many viewers remember TV reports about a German food retailer and an American online retailer that caused a sensation about the hell of their warehouse order pickers, who are slaves of modern times. In short, the disenchanted image of a little-known function.

Gilles Paché is Associate Professor in Management Sciences at the University of Aix-Marseille - Author of " Logistics services "EMS Editions, 2011

National Geographic : Discover the trailer of the exceptional documentary "Jane: A Message of Hope".