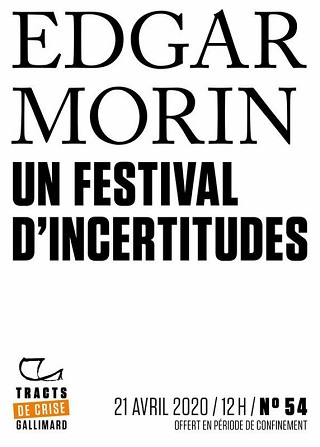 All the 20th century futurologies that predicted the future by carrying currents through the present into the future have collapsed. Yet we continue to predict 2025 and 2050 while we are unable to understand 2020. The experience of the eruption of the unexpected in history has barely penetrated consciousness. The arrival of the unpredictable was foreseeable, but not its nature. Hence my permanent maxim: "Expect the unexpected."

I was one of the minority who foresaw the chain of disasters caused by the uncontrolled unbridled unbridled globalization of technology and economics, including those resulting from the degradation of the biosphere and the degradation of societies. But I had not foreseen the viral catastrophe. There was, however, a prophet of this catastrophe: Bill Gates, in a conference in April 2012, announcing that the immediate danger to humanity was not nuclear but health-related. He saw in the Ebola epidemic, which had been brought under control fairly quickly by chance, the announcement of the worldwide danger of a possible virus with a high contamination power. He outlined the necessary preventive measures, including adequate hospital equipment. But despite this public warning, nothing was done in the United States or elsewhere. Because intellectual comfort and habit abhor messages that disturb them.

"The experience of the eruptions of the unexpected in history has hardly penetrated consciousness. The arrival of the unpredictable was foreseeable, but not its nature."In many countries, including France, the economic strategy of just-in-time flows, replacing that of stockpiling, has left our health care system without masks, testing instruments and breathing apparatus; this, combined with the liberal doctrine of commercialising hospitals and reducing their resources, has contributed to the catastrophic course of the epidemic.

The challenge of complexity

Knowledge is multiplying exponentially, overwhelming our capacity to appropriate it, and above all it challenges complexity: how to confront, select and organize this knowledge in an appropriate way by linking it and integrating uncertainty. For me, this once again reveals the deficiency of the mode of knowledge we have been taught, which makes us disjoin what is inseparable and reduce to a single element what forms a whole that is both one and diverse. Indeed, the stunning revelation of the upheavals we are undergoing is that everything that seemed separate is connected, since a health catastrophe catastrophizes the totality of all that is human in a chain reaction.

It is tragic that disjunctive and reductive thinking reigns supreme in our civilization and holds sway in politics and economics. This formidable deficiency has led to errors in diagnosis and prevention, as well as to aberrant decisions. I would add that the obsession with profitability among our dominants and leaders has led to guilty economies such as, once again, for hospitals and the abandonment of mask production in France. In my opinion, deficiencies in thinking, combined with the unquestionable dominance of an unbridled thirst for profit, are responsible for countless human disasters, including those that have occurred since February 2020.

Greatness and weakness of science

It is more than legitimate for science to be summoned by the authorities to fight the epidemic. However, citizens, initially reassured, especially by Professor Raoult's cure, then discover different and even opposing opinions. Better informed citizens discover that some major scientists have a relationship of interest with the pharmaceutical industry, whose powerful lobbies with ministries and the media are able to inspire campaigns to ridicule non-compliant ideas.