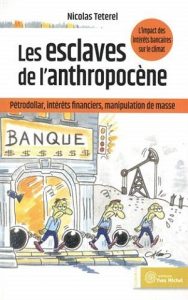 Nicolas Teterel defends the thesis that our system of money creation through interest-bearing debt obliges us mathematically to generate new debts that are larger than previous ones.

This book highlights media manipulation, geopolitics, indebtedness, the monetary system, climate change and the limits to growth. It speaks of a drifting civilizational system that will soon implode if we do not put an end to debt slavery and its consequences: the quest for infinite production and growth.

The author argues that policies are now merely the emanation of banks and multinational corporations that spy on and manipulate the masses. He warns of global warming and mass extinction, which the US empire is royally ignoring, obsessed as it is with China and the vital need to protect the petrodollar, whatever the cost.

In a simple and direct style, Nicolas Teterel lifts the veil on the scam of money creation and dissects the functioning of our system. He unveils his recipe for debt forgiveness. He also advocates abandoning the dollar and the GDP wealth index, so as to no longer be the slaves of our time.

Today, people know the price of everything and know the value of nothing."
Oscar Wilde

Nicolas Teterel lives in Prague and Paris. He is present on social networks and a member of the Extinction-Rebellion movement. A frequent traveller, he regularly changes countries and continents to take the pulse of the planet. For a long time an economic journalist, today he tells the story of what he has discovered by dint of commenting on the absurdity of ostentatious waste against a backdrop of slave debt and climate catastrophe.

It's a very accessible book; it highlights links between phenomena in very different fields; among other things, as long as currency involves interest, greenhouse gases will increase....
Book available in bookstores and on the publisher's blog http://www.yvesmichel.org/product-page/livres-nouveautes/les-esclaves-de-lanthropocene/. Hard copy and Ebook .

An ecological currency to save the planet, by Alain Grandjean and Nicolas Dufrêne