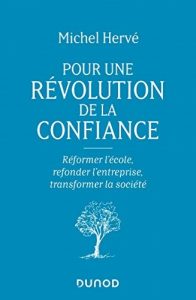 Reforming the school, re-founding the company, transforming society, these are the three axes that structure Michel Hervé's social project. This book is a plea for the establishment of a real participatory democracybuilt on trust between individuals. This model is not simply political, its strength is that it can be applied in companies, schools, universities, hospitals, families?

Michel Hervé has been experiencing this for more than 40 years, in his group organised on a concerted basis. He proposes to radically transform management methods. But this internal rebuilding of companies is not enough on its own. The school must also evolve, to train freer and more creative individuals. Collaboration, creativity, collective intelligence, ecological thinking: if this virtuous circle is set in motion, we will be ready for a revolution in trust.

Michel Hervé, in this book, pleads "for the establishment of a genuine participatory democracyThis is true not only in politics, but also in companies, schools, universities, hospitals and families. In these troubled and threatening times, we must not give in to the temptation of inward-looking, hard-line leaders. In the face of economic uncertainties, climate perils and populist dangers, democracy is perhaps our best salvation.

In a consultative democracy, everyone decides with the others, discussing, compromising, so as to marry the divergent interests....

According to him, "the principle of fraternity is much more important than the principle of freedom. As we shall see, freedom can exist without fraternity, while fraternity necessarily produces freedom. The basis of democratic society is therefore not the individual, but the group. And the raw material that enables groups to function democratically is trust.

This book is therefore a "kind of guide to help us imagine and build a society that functions not through confrontation but through cooperation. A world based on consultation, sharing, attention to others and the redistribution of power, knowledge and wealth".

... "We must also carefully cultivate the most promising seeds of the future society. Those seeds are the younger generation, the Internet and ecology.

"One of the theses of this book is that control is counterproductive: it is expensive, it works poorly, it produces distrust, it penalizes honest people, and it can even encourage cheating. Power induces counter-power, as we have seen with the example of Macron and the Yellow Vests. It produces confrontation, defiance, camps stiffened in their position that see the world in black and white without any shades of grey. Confidence, on the contrary, allows individuals to blossom in their singularity and to build harmony. This may seem naive at first glance, but believe me, if our societies were transformed from one based on control to one based on trust, all aspects of life would be affected. »

Michel Hervé is the founder and chairman of the Hervé Group (more than 3000 employees, 21 subsidiaries). He has held various political positions, taught at the University of Paris VIII and founded the financial institute IDPC. Michel Hervé has also been involved as president of the Ludothèques de France and democratic schools. His experience and his interest in the human sciences have enabled him to build an innovative company that draws its strength from collaborative management.