Faced with the coronavirus and the containment it causes, Gallimard publishes one or two " Crisis leaflets "signed by the great feathers of the House such as Erik Orsenna, Sylvain Tesson, Cynthia Fleury, Régis Debray or Danièle Sallenave, in order to reflect on the questions raised by the epidemic and to keep the link with the reader. 56 titles have been published to date. UP' has chosen to offer you each day an extract from a selected text and author. 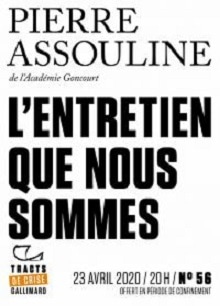 It's crazy what we've been talking about since we haven't met. We're still seeing each other, but not for real. The fence imposed on us hasn't killed anyone's taste. It's still going on, but in a different way. And zooming in, skyping, this facetimer! Meanwhile, another talk continues elsewhere and without image, without the delight of face to face.

Thanks to the events, full of anguish, doubts and uncertainties, the conversation on the Web has multiplied. The night is no longer the refuge and the executioner of solitudes that are unbearable. The day too. On the Web, there is always someone to talk to. Every day of the year, at any time of the day or night. "Every good listener must find salvation there and find himself there, unsullied," a beautifully timed formula from Baltasar Gracián's Criticon. The old conversation is revived at its best: people are not interested in people for what they do - their wealth, power or profession, all of which are ignored and never asked for, but for what they are. The exact opposite of the French conversation as it is practiced daily in the 21st century, where you are what you do, and where you exist only by what you represent. The Internet resurrects this relative and blessed invisibility. It reinstates a starting point of equality between interlocutors, which was the very basis of the dialogue. Should we believe that new technologies will help it to become the foundation of morality once again?

Was it Hölderlin or Kleist who put this short and dense formula: "The interview that we are"? What does it matter to the author when his reflection is intelligible to us without him: what are we without this permanent conversation that we have with books and men, this permanent colloquium with the other? We are never right on our own. Never forget that, originally, conversation was not necessarily understood as speaking. To enter into a conversation is to tacitly accept to put oneself in society. Even the dandy has a place in it. He is identified by his ability to express himself constantly, not to exchange anything with anyone but to reign by his verb. Flattered or scorned, he doesn't care and goes his way alone. Only lasting indifference is likely to discourage her. But as a general rule, any desire for a monologue is swept away. The constant taking to task and the permanent injunction are such that they force an exchange. No one soliloquies for long. Anyone who has a foothold on the Internet will agree: if the Internet is a garbage can, you can find the best and the worst in it. But apart from the fact that the worst also contains nuggets, the best is unique in that it is there and nowhere else. If it's now online, it's also where the bulk of the conversation takes place, where it unfolds.

Rarely has conversation become so obviously established as a form of oral literature. The old denunciation of the fallacy of orality falls in front of online exchange; it becomes inoperative as the confusion of genres is immediate, the written being oral. Conversation knows no dead time in this world that ignores time zones; there is always someone to talk to somewhere.

The word flows there in a circumnavigation, a river in the flow of information and knowledge. It naturally fits into this new world where truths are no longer intangible but evolve from hour to hour. The followers of online conversation are sometimes closer than people who know and frequent each other for real. What is the reason for this closeness if not the awareness of belonging not to the same tribe but to the same network?

What does it take to re-enchant the path?