Are we really living in such an unprecedented era of containment imposed by antiviral prophylaxis? The management of the crisis is naturally following the lines of force of the world before the crisis, it even amplifies certain directions and will impose, if we really want something different, to analyze the practices by weighing without naivety what will have been pursued "virally", stupidly, even monstrously.

"The Echo of Emptiness" is a painting by Salvador Dali, visible in the exuberant museum of Figueras.
A sandy strip merges with a heavy sky; on the right stands a tree in the process of fossilization, taking the appearance of a worn, pierced flint; from the left corner, a shapeless mass appears, brown and full, its limit is unknown; it overhangs a frail figure advancing, dressed in a sort of white blouse. Since there is no other character, this one appears surrounded by a perfect "social distancing". Finally... we can imagine a lot here: for example, the mother busy with her grief (the story is well known: Dali's mother had just lost a son when the "new" Salvador was born), her dry breast for the child who identifies with her to want to understand her, his task to get through the depression and to find shapes on the formless.

This is indeed the work of the artist, to give us by provoking our imagination. Thus we can see in this desolate scene the loneliness of the contemporary, too - why not? - the ruin of what was imagined to be fertile and which, because it was found that trees never go up to heaven, will have been cracked in favour of enigmatic conglomerates. In short, mutualisation on the one hand, commoditisation on the other, public service and pension funds or asset managers (such as BlackRock, a giant multinational whose president, France, sits on the "Public Action 2022 Committee" which aims to... reduce public expenditure and has just been chosen by the EU as its environmental adviser). 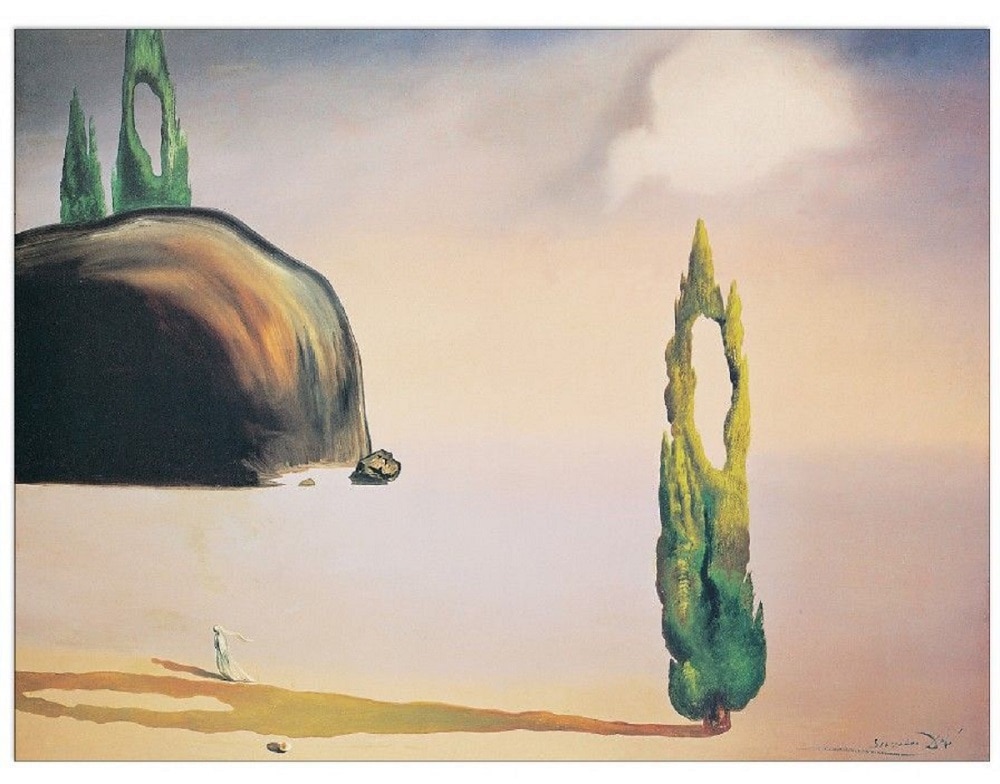 The echo of the void of Salvador Dali

There is no need to recall the echo given in recent times to the demands and concerns of public services. On the existential deprivation staged by Dali, we shall evoke the feeling of being very small, also how the protective measures against Covid-19 attack our capacity to be connected, our elementary humanity by rendering obsolete, for example, certain ways of saying "hello", also certain ways of saying "goodbye" (the impact is great on funeral rituals).

But in this "dehumanization" appears less the expression of a brutal rupture than the magnified, undoubtedly monstrous, expression of a tendency towards dematerialization, the non-personalization of relationships. The hospital is, alas, a privileged observation site for this slope which is evolving at a forced march; undoubtedly the way in which the elderly are cared for also, perhaps even the way in which the youngest are cared for (one is entitled to wonder whether the devitalization of the link to the other is not evolving in the same way for the school, where "e-learning", with all the inequalities of access that one can imagine, would replace knowledge otherwise brought into the community).

Have we reached an unprecedented paradox with this "social distancing" meaning that caring for the other obliges us to physically separate from them? Here too, the paradoxality of exchanges is only a growing affair, remarkable in the relationship between the citizen's expectations and political discourse. For example, it is easy to note how a certain over-psychologization in society bypasses profound individual needs. Everything is like those psychological cells where an acute disorder is identified without it being lawful to question the more "historical" structuring of the difficulties that may have, by force and force, hatched there or there (legitimately: this is not the time).

"Public action", "Quality unit" ... it is the irresistible progression of a language which, in hospitals, the carers do not cease to deplore the impact on the quality of their work so much the task is to supervise the care by a succession of protocols evacuating the human hazard by evacuating the human. With the Covid crisis coming in this vein, it demonstrates not so much the day-to-day error of political speech, but the amplification of its paradox that has become natural.

If we want words more than a picture (we have all seen a policy that advocates containment by making an exit in front of a touch-touch audience), we will read the document generously sent by the Equality Secretariat to child psychiatrists, for example, who were not consulted: "... the policy is not just about the image, it is about the fact that it is a policy of containment. Guide for confined parents - 50 tips from Pro ".

We thus recognize the modern tendency of politics to fire all quotations, detached from their context and their own author, thus constituting a mosaic of ideas as if it were necessary to convince by the profusion, the reading of a dictionary and not by the enunciation of a common sense which becomes, in this rhetoric, worthy of the hypnotist, inaccessible.

To pass on what? Calling in a "baby planner", a "slow parenting" coach ... very quickly an "Inclusion and Innovation expert" revealing, thanks to teleworking, "...". the satisfaction of being dreadfully productive/productive with less disruption "(Tip 6!), this document seems to be a claim for the widespread digital transition.

This is indeed the work of a certain politics, of giving ourselves by draining our imagination with contradictions of which we cannot know what to think, if not with an equally indisputable moralism, but behind which the attack on sufficiently lively human ties continues (at the risk of conflict, sometimes: that's life).

The current climate, everyone is experiencing it, is tiring. This tiredness stems from the obvious shift in our points of reference, from the fear of contamination and the anxiety of confinement, but a powerful source lies in this paradox which does no service to thought, subverts or exhausts it, leaving it empty where it should be stimulating. On this problematic front line, to speak of "war" is a condensation: it hysterizes the moment which is, in reality, not that of a war, it exhausts in advance, it segments the population, it reinforces the doubt towards the chosen one since everyone knows that war heroes are rewarded by making commemorations, not structural reforms.

As in Dali's paintings, the void soon gives rise to monstrous forms. Perhaps the politics of "at the same time" is already one of them, with its unnatural hybridizations of the Flaubert-telework type, which it also demands of the forces of law and order with these strange insects, drones and helicopters, which fly over the forests and coastlines. But we must fear that these monstrous forms may soon take on fearsome new incarnations and, to counter them, we will have to think resolutely differently about the common good and the needs of the entire population, among them the need for History, the answer to which should no longer be confused with hypnosis or the short-sighted consolation of a post-traumatic anticipator, still less with contempt.

Would blanket containment be a mistake?