Our insatiable thirst for curiosity naturally attracts us to the most prestigious archaeological sites and to visually sensational contexts, for example a monumental tomb with deceased accompanied by a rich metal material. However, in archaeology, it is sometimes very discreet clues, even invisible to the naked eye, that provide information that can renew our knowledge.

Ainsi, the blog of the World "In the footsteps of archaeologists. Excavations in the lab" was theecho on August 17 of an apparently modest but in fact exceptional archaeological discovery: bees and beehive products preserved thanks to a fire in an Etruscan settlement on the Po plain in Italy.

The archaeology of the products of the hive is a little developed field of research because of the small amount of data preserved until now.

If beeswax is revealed thanks to biomolecular analyses, honey and mead largely escape us, except for a few rare attestations allowed by palynology (the study of pollens preserved in archaeological strata).

On the site of Forcello, where archaeologists discovered bees and hive products, the practices of Etruscan beekeepers were exceptionally preserved thanks to a violent fire at the end of the 6th century BC.e s. B.C. (circa 500). A high quality honey was extracted from it but also a special product, bee bread (bee bread) with great nutritional and therapeutic qualities. The results of archaeobotanical studies made on the Italian site and published in the Journal of Archaeological Science are of great scientific importance because they reveal what has usually disappeared through natural decay.

An archaeology of biology

We are in the field of organic archaeology, that is to say archaeology relating to the manufacture of food, medicinal and cosmetic products from mainly organic materials. Honey and beeswax belong to these categories of biological substances widely used by our ancestors for a wide variety of uses, including the manufacture of cosmetic and medicinal products.

The Université Bretagne Sud has piloted two international research programmes (Perhamo and Magi), laureates of the National Research Agency for the archaeology of biological products and more particularly the knowledge of perfumed and medicinal substances in Greek, Etruscan, Phoenician-Punic and Roman antiquity.

At the interface between material sciences and human sciences, these programmes were based on a multidisciplinary approach combining archaeological studies (typology of material, epigraphy, studies of discovery contexts), historical studies (texts and images), archaeobotany (characterization of pollens) and chemical analyses of contents.

The most commonly used method is gas/liquid chromatography coupled to mass spectrometry: an analytical technique that separates the different compounds in a sample to identify them. It is a precise, sensitive method, suitable for simple or complex, degraded or mixed biological products. The identification of materials is based on two stages of interpretation:

This method makes it possible to characterize the biological materials that were contained in an ancient vase and thus provide archaeologists with completely new data of great scientific interest.

Perfume and cosmetic vases are very numerous in antiquity, attesting to both daily and sacred use of scented resins, perfumed oils and therapeutic ointments.

In Mediterranean Europe, it is in particular from the VIIthe s. B.C. that the fashion for perfume spread and gave birth to a large-scale shipping.

Among the many written and iconographic testimonies, the poetess Sappho de Lesbosat the end of VIIe, beginning of VIe s. B.C., sings the sensual voluptuousness of floral scents and oriental perfumes:

"How many woven garlands, how many lovely flowers you wrap around your delicate throat! How many vases of perfume, brenthium or royal perfume, you spread on your hair! » 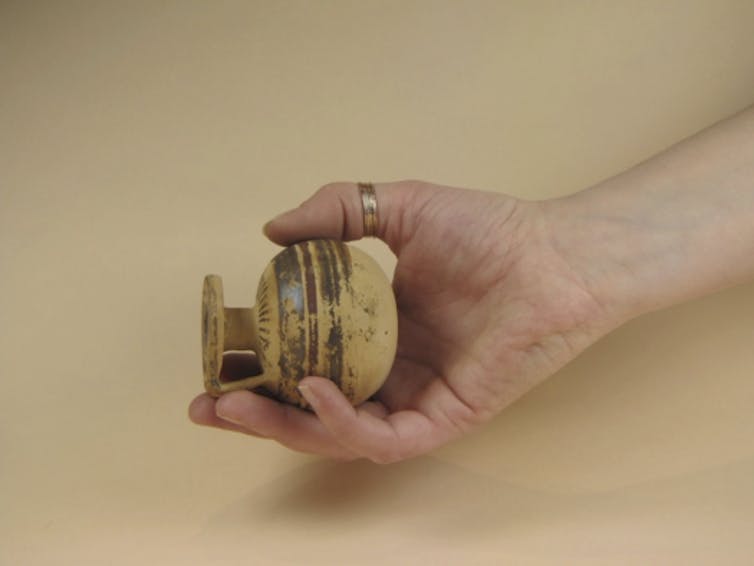 Corrugated cardboard, this innovative material is more than 130 years old!