Our time is devoted to new technologies; they occupy our daily lives, create our needs and have become indispensable to us. They promise us to cross all limits, even to the point of claiming to set back our death. Their credo has made us dream if not illusionary: "to change the world". A motto repeated by startupers like the titans of Silicon Valley and elsewhere. Yet, during the Covid-19 crisis, technology let us down and failed in its most important role: to keep us alive and healthy. In the age of artificial intelligence, genomic medicine, robots, and autonomous vehicles, our most effective response to the epidemic was mass quarantines, a public health technique from the depths of the Middle Ages.

The most emblematic failure of technology during the Covid-19 outbreak was that of testing. Standard tests for diseases such as Covid-19 use polymerase chain reaction (PCR), a chemical technique that is more than 30 years old and commonly used in laboratories around the world. Yet, although scientists identified and sequenced the new coronavirus in the weeks following its appearance in late December - a critical step in creating a diagnosis - most Western countries stumbled in the development of general-purpose PCR tests. The incompetence and sclerotic bureaucracy of public health agencies meant that it took weeks before tests could be widely used by the public. Weeks were lost as the epidemic spread at full speed and victims crowded into emergency departments.

Meanwhile, the nasopharyngeal swabs needed to collect samples for PCR assays were proving to be a very scarce commodity, as were the chemical reagents needed to process the samples. During the critical first few weeks when the coronavirus could still have been contained, many people, even seriously ill, could not be tested for the deadly virus. Four months into the pandemic, most states were still struggling to carry out the massive and frequent testing needed to safely end the extremely costly widespread containment.

Combined with the lack of testing, a fragmented and neglected public health data collection system meant that epidemiologists and hospitals knew too little about the spread of infection. In the age of big data, where companies like Google and Amazon use all kinds of personal information for advertising and commercial operations, health authorities made their decisions blindly. That's one reason why scientific advice from governments relied on models, which later turned out to be scientifically questionable, to build strategies to deal with the epidemic.

The lack of reliable tests and data is not the only reason that has condemned so many Covid-19 patients. The main cause is the lack of respirators to treat severely ill patients and of masks to contain the contamination as much as possible. This shortage is aggravated by the lack of production facilities in most Western countries to manufacture them. For example, the vacuum cleaner manufacturer Dyson set out to manufacture respirators for hospitals in a hurry, Decathlon recommended tinkering with its beach masks, and the States placed massive orders for surgical masks with the Chinese, creating the circumstances for a shortage market that was taking on a Wild West feel. All this for a simple reason that cruelly came to light: the extent to which our means of production were being transferred abroad, particularly to Asia.

The erosion of innovation ecosystems

How was it possible that we were so deprived of the capacity to produce essential goods for the health of populations? It would be easy to blame the negligence of political leaders, their lack of long-term vision. But such grievances would only obscure the true nature of the problem. The disaster we have experienced appears brutal and sudden; in fact, it was fomented for decades. It has to do with the transformation of our innovation ecosystems.

In the past, innovation ecosystems were healthy because they were able to identify and create the technologies essential to a country's well-being. This logic has been eroded over time.

A country's ability to invent and then deploy the technologies it needs rarely falls from the sky. It is the result of public funding decided by government policies. It is these policies that provide the decisive impetus for innovations that are useful to the well-being of the population. Today, in most major Western countries, public investment in the manufacture of products crucial to public health, whether drugs, vaccines, tests or hospital equipment, has not been seen as a priority. Without government leadership, financial and regulatory support, critical new technologies cannot be developed. Instead of anticipating needs and avoiding being caught off guard, what have Western states done over the past forty years? They have been bending over backwards in markets and companies to create innovation.

This approach gave birth to today's major technology companies, it led to the birth of Silicon Valley and its avatars elsewhere in the world. Giants were born there, making them the envy of everyone. Digital titans hatched, the only companies worthy of note were the startups that attracted hundreds of millions of ideas. By contrast, critical areas such as manufacturing and infrastructure to meet a country's most basic needs were being left out of public investment and choice.

The Covid-19 pandemic has been an eye-opener in many areas. But the one in which it directed a harsh light is that of innovation and the way states think about innovation.

A way of thinking about innovation

An article published by the MIT review recalls how economists like to measure the impact of innovation in terms of productivity growth, in particular "total factor productivity", i.e. the ability to achieve more output from the same factors of production (such as labour and capital). Productivity growth is what makes advanced nations richer and more prosperous in the long run.

But for the United States, as for most other rich countries, this measure of innovation has been disastrous for nearly two decades.

The author of this article points out that there are many different ideas explaining the reasons for the decline in innovation. The first that comes to mind points to the types of inventions that once transformed the economy - such as computers and the Internet, or before that the internal combustion engine - and that have ceased to emerge. Another reason would also be that we have simply not yet learned to use the latest technologies, such as artificial intelligence, to improve productivity in many sectors. But the most likely factor is that governments in many countries have significantly reduced their investment in R&D and technology since the 1980s.

According to John Van Reenen, an economist at MIT, US government-funded R&D has fallen from 1.8% of GDP in the mid-1960s, when it was at its peak, to 0.7% today. The same phenomenon is found in all OECD countries. France's public spending on R&D has been declining since the 1990s and has subsequently stabilized at between 0.75 and 0.80% of GDP. 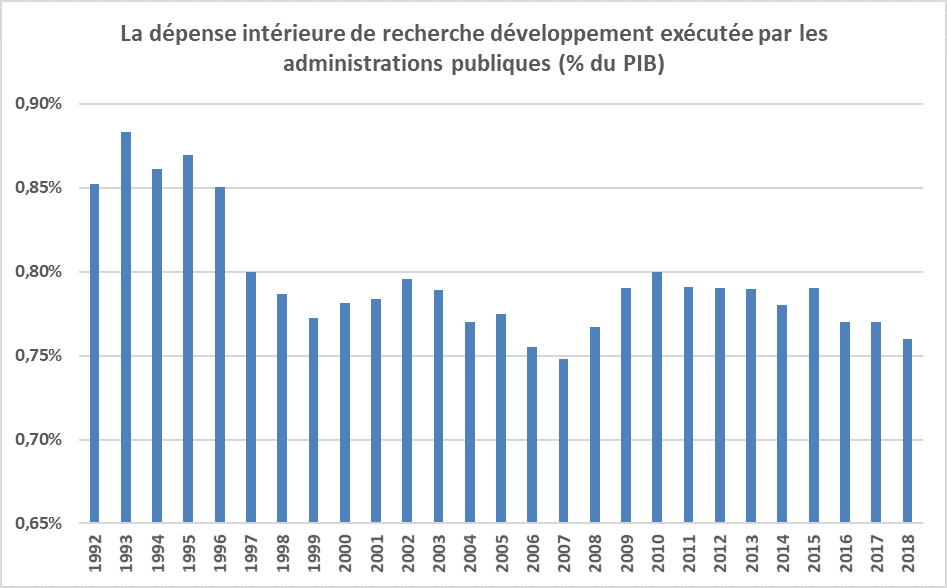 The decline in the share of public investment in R&D and technology has two consequences. The first is that research on high-risk technologies is not carried out by the private sector. It is usually the preserve of governments. The second is that by leaving the conduct of innovation to private investment alone, the money invested is naturally channelled to the most lucrative markets.

Therefore, the main practical uses of artificial intelligence have been in web search optimization, ad targeting, voice and face recognition, and online sales. Pharmaceutical research has largely focused on the search for successful new drugs. Vaccines and diagnostic tests, sorely needed today, are less lucrative. More public funding could have stimulated these activities. This was not the case.

Moreover, it is not enough to invent new technologies, robots, digital technology at all costs, and ingeniously advanced machines: public support is also vital to help companies adopt them. This is particularly true in large, slow-moving economic sectors such as healthcare and manufacturing, precisely where the country's capacities have been most affected by the pandemic.

This leads to absurd situations: our developed countries are full of high-tech tools and devices, our children naturally converse with robots, and soon we will no longer be driving our vehicles ourselves, which will be self-guided by highly sophisticated sensors. But our same societies are incapable of producing masks, gowns for caregivers and the most basic medicines. We must therefore, all business as usual, repatriate the production of paracetamol tablets from China and build the necessary manufacturing plants with a great deal of public funding.

The verb "to relocate" is therefore on all languages. Governments have understood that the production of certain technologies crucial to the life of a country cannot be delegated. But restarting these lost activities is no easy task, as pressure from financial markets, the indifference of successive governments and fierce competition over wages have led to the decline not only of industry but also of entire sectors of manufacturing production. This holy Covid-19 will have driven the wedge deep into the slightest structural flaws of our modern states. The situation might make one smile if it did not result in thousands of sick and dead people being compulsorily counted by the health authorities in just about every developed country in the world.

Just as the concept of infinite growth in a finite world is absurd and toxic. The idea of accelerating everything, everything has to be faster, more agile, to win and be first. Innovation requires time of inspiration and vacuity to understand test and find, incompatible with a predictive world where everything must be smoothed, programmed, mastered ... to keep the promises made to shareholders: vampires of yesterday's world. Because of this, teams are forced to fake, forge, copy, create false needs, twist the numbers, bias the systems the… Read more "

The "Day After" - How to Enrich Our Constitutional Fundamentals