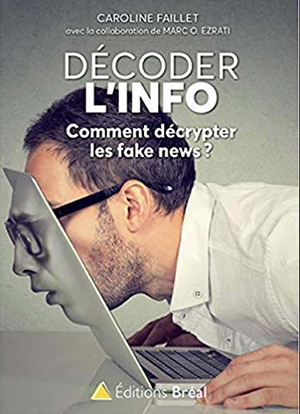 Decoding the news - How to decipher fake news, by Caroline Faillet

Trop d'infos kill the info? In a society of infobesity, the paradox is that the public has never been so poorly informed. Hoax, parodies, rumours and bad-buzz abound on a web whose mechanisms for spreading false news have become structural.
How far away is the time of media fascination for social networks that liberate the peoples of the Arab Spring! The time of enthusiasm for the miracles of the campaigns targeted by big data that offered Obama his victory! What disenchantment to give the web the first place in the list of the risk of insecurity (cyber attack), the ethical peril (data manipulation), the destruction of economic balances (uberization, vampirization of the GAFA), or the threat to a democracy mired in the fachosphere and fed by fake news ...
Haax, parodies, rumours and bad-buzz abound on a web whose mechanisms for spreading false news have become structural.
This book offers a meticulous and illustrated deciphering of the workings of disinformation on the Internet. Revealing the intentions behind these fake news, the authors demonstrate the manipulations of opinion that are at work and the political, economic or scientific consequences they engender.
While the outlook is bleak, in a context where the media are struggling to find a viable economic model, the book nevertheless explores the solutions and assesses the different responses envisaged by the editorial offices of major newspapers, web giants and institutions.
HEC training, Caroline Faillet has been interested since the early 2000s in the influence phenomena specific to digital technology. In 2014, she co-founded the Bolero firm, whose mission is to decipher the opinions and behaviours of Internet users in order to inform the strategies of organizations. She is the author of the Art of Digital Warfare (Dunod, 2016), which won a medal from the Academy of Commercial Sciences in 2017.
Share
Tweet
Share
WhatsApp
Email
Print
Login
0 Comments
Inline Feedbacks
View all comments
Previous article

Help, my life is going digital!

The digital apocalypse will not happen.

Internet or the return of the candle

Internet or the return to the candle, by Hervé Krief - Edition ecosociété,

(Cyber)harassment: Getting out of violence, at school and on the screen