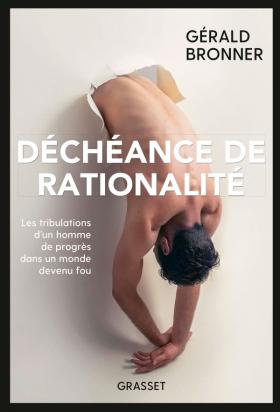 Decline of Rationality - The Tribulations of a Man of Progress in a World gone Mad, by Gerald Bronner - Edition Grasset, March 2019 - 272 Pages

Ahe world has gone crazy, we all see it a little bit every day. We are overwhelmed by a continuous outpouring of fake news and conspiracy theories, by ordinary hatred on social networks, by the radicalization of points of view, in everyday life, in the family, on the roads, at work... Generally speaking, the tone rises, in a mixture of feverishness, versatility, and without much respect for the Other.
The situation is such that the defence of rationality in public debate is often inaudible, if not unthinkable. Reasonable, did you say reasonable? So this book will appear as a provocation. It proposes to understand our contemporary impotence in the face of what many call the "rationality of the public". post truth society, by inviting us behind the scenes of this collective madness.
Gérald Bronner invites us to observe the excesses of a certain intellectual world and to meet with him the young people of the first French "de-radicalization" centre in Beaumont-en-Véron, which he followed for several months. How can we "bring back to reason" young people who are not sick in general, but fanatics? How to enter into their way of thinking and pull them out of ideology?
For, according to the author, "The immediate effect of this activity of religious minorities in all fields is to organize a permanent confusion between the visibility of information and its representativeness. It is not a question of prohibiting these minorities from expressing themselves, but of questioning our collective apathy. The average ordinary citizen's lack of motivation in the face of this flood of gullibility is one of the keys to the problem. As the author wrote John Stuart Mill in the mid-nineteenth century: "Evil needs nothing to achieve its ends except the inaction of good people. (1) ». So a new form of citizen activism is what we need to appeal to."
From a meeting with the President of the Republic to exchanges with Jean-Marc Rouillan, the founder of Direct Action, from a scene from daily life to the story of the end of a millenarian sect, Gérald Bronner proposes to analyse this delirious situation and to guide us towards a relative light.
(1) Inaugural Address, Delivered to the University of St. Andrews, J.S. Mill, 1er February 1867
Gérald Bronner is Professor of Sociology at the University of Paris-Diderot, member of the Academy of Technologies and the National Academy of Medicine. He works on collective beliefs, errors of reasoning and their social consequences. He has published several books on these issues, including L'empire des croyances (PUF), which was awarded a prize by the Académie des Sciences Morales et Politiques, and La démocratie des crédules, for which he has received numerous prizes. His latest book, co-written with Etienne Géhin, Le danger sociologique (Puf, 2017). He is an editorialist in Le Point, columnist in For science, the New Literary Magazinethe issue 28 minutes on Arte and I24news.
Share
Tweet
Share
WhatsApp
Email
Print
Login
0 Comments
Inline Feedbacks
View all comments
Previous article

The new resistance to technological violence